Long before scientists discovered how different kinds of weather move, people tried to predict, or forecast, the weather. They watched the sky, felt the air, observed the directian of the wind, and noticed whether it was getting warmer or colder. From these observations, they discovered that certain conditions are usually followed by certain kinds of weather. The meteorologists that we call weathermen still depend on observations in making their weather forecasts. But they have instruments to help them get more accurate information about the weather.

A meteorologist always mentions the temperature of the air when he describes the weather. So one of the first instruments that you would expect to find at a weather station is an accurate thermometer. Each station has several thermometers, which are used in different ways. To make the temperature readings standard at all weather stations, an official mercury thermometer is placed inside a special kind of instrument shelter. This shelter is built at a standard distance from the ground and away from the nearest building. lts sides are made of slats so that the air can go through but the sun cannot shine in.

Besides this instrument, each weather station has a maximum-and-minimum thermometer that shows the highest and lowest temperatures during 24 hours. To keep a continuous record of the temperature, a thermograph, or recording thermometer, is used. This has a metal coil that expands and contracts as the temperature changes. The movements of the coil raise and lower a long bar that carries a kind of fountain pen. The pen draws a line on a sheet of graph paper wound around a drum. The drum is turned at the correct speed by a clock, so that the pen makes a record of the temperature for an entire week before the instrument must be reset. 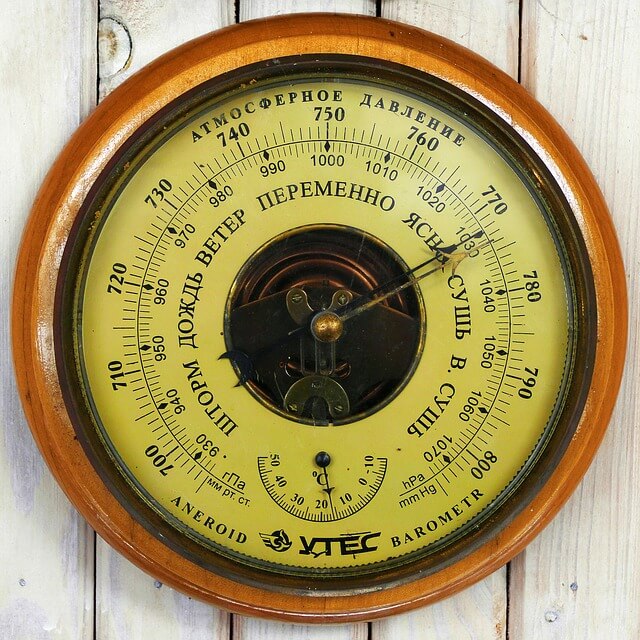 The pressure of the atmosphere is an important guide in forecasting the weather. So each weather station has at least two barometers. One is a mercury barometer, while the other is a recording barometer, or barograph. Like a thermograph, a barograph makes a record for an entire week before it must be reset. The pen is moved by an aneroidbarometer, while the drum with its sheet of graph paper is turned by a clock as in a thermograph. Both barometers can be kept inside the weather station, because the atmospheric pressure there is the same as it is outdoors.

The amount of rainfall is measured with a rain gauge. This is a rustproof can about 8 inches in diameter and 20 inches high. Rain is caught in a wide-mouthed funnel that leads to a narrow tube. The cross section of the top of the funnel is ten times the cross seetion of the tube. To find out how much rain has fallen, the number of inches of water in the tube is first measured. Then this number is divided by 10 to get the amount of rain that actually fell. For example, if there are 10 inches of water in the tube, this means that 1 inch of rain has fallen. This method is used so that extremely small amounts of rain can be measured more accurately.

Snowfalls must be measured, too. The depth of a snowfall is found by pushing a measuring rod straight down into the snowat several places where it has not drifted. Then the average of these measurements is taken. To keep an accurate record of the total amount of water falling on the earth, the amount of water in the snow must be found. The snow can be caught in the outer can of a rain gauge. Then the gauge is taken inside, where the snow is melted and measured in the tube of the rain gauge. The amount of water depends on whether the snow is heavy and compact or light and fluffy. Usually, about 10 inches of snow make 1 inch of water.

The weathermen also need to know what is going on in the air high above the earth. if there are elouds in the sky, they can get some information by observing the kind of clouds, their height, and the direction in which they are moving. But weathermen must know more about the temperature, the air pressure, the wind, and the humidity than they can find out from the clouds. So if you should visit a weather station when observations are being made, you might see someone sending up a pilot balloon, or sounding balloon, as it is sametimes called. The balloon is filled with helium and then turned loose to rise and float with the wind. By watching the balloon through certain instruments, an observer can tell the direction and the speed of the wind high above the earth.

To find the temperature, air pressure, and humidity several miles up in the atmosphere, a radiosonde is ordinarily used. This is a box that holds instruments to measure and record the temperature, air pressure, and humidity. Attached to these instruments is an automatic radio transmitter. As the radiosonde is carried up into the atmosphere by aballoon, the radio transmitter sends back the readings of the instruments to a radio receiver in the weather station. When the balloon gets so high that it bursts, a parachute lowers the weather instruments and the radio transmitter to the earth. Balloons carrying radiosondes of ten go as high as 15 miles above the earth, and some have gone as high as 25 miles above the earth.

Many weather stations use radar to detect approaching storms, cold fronts and warm fronts, and especially heavy rainstorms. The radar instrument sends out radiowaves, which are reflected back to it from clouds and precipitation within a distance of 250 miles from the weather station. Radar works both day and night, it can also be used to follow pilot balloons and measure their movements.

Airplanes and artificial satellites help weathermen gather information that would otherwise be difficult or impossible to get. Weather planes equipped with instruments to measure the speed and the directian of the wind can fly into the very center of hurricanes. Weather satellites carry television cameras that automatically take pictures of the atmosphere as the satellites revolve around the earth. These pictures are sent to receivers on the earth, where the clouds can be studied. Other instruments in the satellites gather information that is sent back to the earth by radio.