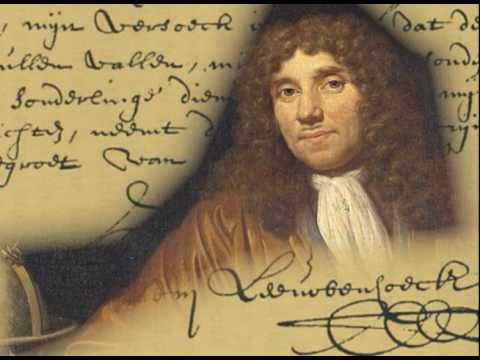 Antonie van Leeuwenhoek; (1632-1723), Dutch microscopist and biologist whose improvements on the light microscope enabled him and other biologists to make many important discoveries.

Leeuwenhoek was born in Delft, Netherlands, on Oct. 24, 1632. His early schooling was brief, and at the age of 16 he was apprenticed to a cloth merchant and soon after became shop bookkeeper and cashier.

As a hobby, Leeuwenhoek began grinding lenses and using them to study minute objects, particularly small organisms. The hobby soijn became a major activity that eventually led to “many remarkable accomplishments. Leeuwenhoek used single, small, double convex lenses with very short focus. The lenses were mounted in flat metal plates equipped with handles so that the instruments could be held close to the eye. Firm objects were attached to a pin mounted behind the lens, and fluids were placed on glass in the same position. A screw adjustment provided for positioning and focusing. By adjusting the lighting and arranging the background, Leeuwenhoek succeeded in obtaining magnification and particularly in resolving power that exceeded those possible with early compound microscopes.

Although Leeuwenhoek did not follow a scientific plan in his studies, his curiosity and capacity for critical observation led him to many interesting observations. In 1668 he extended the Italian anatomist Marcello Malpighi’s demonstration of capillaries in the circulatory system. He also observed the circulation of red blood corpuscles in several capillary systems, including those in the tail of an eel, the web of a frog foot, and the ear of a rabbit. In 1674 he described red blood corpuscles in many other animals.

In 1677, Leeuwenhoek described the spermatozoa of the dog, rabbit, fish, man, and several other animals. He held the philosophic position of a preformationist, specifically an animalculist, —that is, he believed that the entire form of an adult in miniature was present in the sperm and merely unfolded and grew during the embryonic period.

Among some of the other subjects that Leeuwenhoek studied with his microscope were muscle fibers, hairs, epidermal (skin) cells, the nerves of various animals, ciliated protozoa, rotifers, plant tissues, and the anatomy of insects. Leeuwenhoek also described the three morphological types of bacteria: bacillus, cocci, and spirilla; measured the quantity of perspiration; and demonstrated that blood did not ferment in the body.