What are the works of Sir Walter Scott? Information on the poems, novels and books of Walter Scott.

Works Of Sir Walter Scott; The foundations of Scott’s literary career were unconsciously laid, for as a young man he had no ambitions to be an author. He was, nevertheless, storing up the materials out of which he created future works. From childhood Scott was a voracious reader of history, romances, poetry, and drama—not only in English, but also in Latin, French, Spanish, Italian, and German.

His memory was so tenacious that he forgot nothing that interested him. An acute observer, he acquired an intimate knowledge of every type of character, a knowledge he used later in portraying fidelity characters in all walks of life, from kings to beggars. He numbered among his many friends men and women differing in politics and religion and from all social levels, for, though a Tory, he was a democrat in his daily life and writings.

An early love for old ballads led to his first major work, Minstrelsy of the Scottish Border (2 vols., 1802; 2d ed., 3 vols., 1803). While collecting these ballads, he was also attracted to German literature, and his first publication, The Chase and William and Helen (1796), consisted of translations from Gottfried A. Biirger. His next publication was a translation in 1799 of Goethe’s play Gotz von Berlichingen. The Gothic element, which appears in varying degrees throughout his work, was due to this early interest in contemporary German literature. 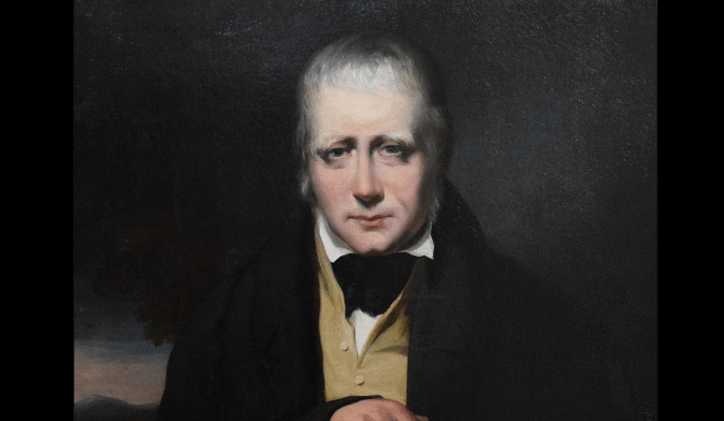 Scott’s rise to fame as a poet was rapid. His name had already spread before the Minstrelsy brought him further into prominence. A ballad that he wrote himself for that collection proved to be too long and was published as The Lay of the Last Minstrel (1805). Its success was immediate, and Scott followed this with Marmion (1808), for which Constable had offered 1,000 guineas before it was written. With The Lady of the Lake (1810) he reached the highest point in his poetical career. Rokeby appeared in 1813, and in that year he was offered, but declined, the poet laureateship. His last major poem was The Lord of the Isles (1815). His others, all minor, were The Roderick (1811), The Bridal of Triermain (1813), The Field of Waterloo (1815), and Harold the Dauntless (1817).

Scott himself said that the emphasis in The Lay had been on style and in Rokeby on character. It was the novelty and vivaciousness of his style that had made Scott the most popular poet of his day. It was the character drawing of Rokeby that made him a novelist. He had, unconsciously perhaps, been experimenting, and in Rokeby he found the outstanding gift that gives him his place in English literature today. For full expression Scott’s genius required a medium that gave him complete freedom, and he found that medium in the novel. But he was an immediate success as a novelist only because he had served his apprenticeship in storytelling, plot construction, and character drawing in verse.

Scott claimed that he gave up the writing of long poems because Lord Byron had beaten him at it, but the real reason for his decision was that Scott knew that he had exhausted his vein of narrative poetry. He was keenly alive to the wants of the public and confident of his own ability to satisfy them, and so he turned back to an early attempt of 1805 to write a prose romance. This was Waverley, which he completed rapidly, and it was published anonymously by Constable on July 7, 1814. Its success was never in doubt, ana Scott found that from the rich stores of his mind he could produce one novel after another with no effort beyond the physical act of writing. Though suspicion fell on him, he maintained his anonymity until the financial crash compelled him to avow authorship publicly on Feb. 23, 1827.

Guy Mannering (1815) followed Waverley after seven months. The next, The Antiquary (1816), professed to be the last by the unknown author. These three formed a sort of trilogy of Scottish manners, covering the years 1745 to 1804. Then, under the pseudonym of Jedediah Cleishbotham he began writing four series of novels under the title Tales of My Landlord. The first series (1816) was The Black Dwarf and Old Mortality; the second (1818) consisted of The Heart of Midlothian; the third (1819) contained The Bride of Lammermoor and A Legend of Montrose; and the last series (1831) was made up of Castle Dangerous and Count Robert of Paris. Between the first and second series, Rob Roy (1817) had appeared as the “Author of ‘Waverley,’ ” and this designation was the most commonly used after that. All the novels to 1819 dealt with Scotland, and so their author came to be known as the “author of the Scotch novels,” a title that lasted until the end of his life, in spite of the fact that with Ivanhoe in 1819 he crossed the Border and produced a novel with a wholly English setting. Similarly, all of Scott’s novels have become known as the Waverley Novels.

After the success of Ivanhoe, which was set in the 12th century, Scott allowed his imagination to wander in time and space for the settings of his novels. He went to 15th century France for Quentin Durward (1823), the Crusades in the Holy Land for The Talisman (1825), India for The Surgeons Daughter (1827), and 15th century Switzerland for Anne of Geierstein (1829). England provided the settings for Kenil-worth (1821), involving the Earl of Leicester and Queen Elizabeth I; The Fortunes of Nigel (1822), placed in the Jacobean era; Peveril of the Peak (1823), which centers on a “popish plot” to overthrow King Charles II; and Woodstock (1826), about the English Civil War. It is among these non-Scottish novels that we must look for Scott’s best work after 1819. The Scottish ones of this period— The Monastery and The Abbot (both 1820), The Pirate (1821), St. Ronan’s Well (1823), Redgauntlet (1824), The Fair Maid of Perth (1828), and Castle Dangerous —do not take first rank, although Si. Ronan’s Well, as the only novel of contemporary manners, and Redgauntlet, because of its autobiographical interest, are both important in a study of Scott.

Scott’s Life of Napoleon was published in 9 volumes in 1827. This had entailed a vast amount of reading and a visit to France in 1826, ostensibly to collect material. He continued to write novels, but, encouraged to concentrate on works that required neither research nor invention, he also wrote Tales of a Grandfather (1828-1831), dealing with Scottish and French history for young readers, The History of Scotland (1829-1830), Letters on Demonology and Witchcraft (1830), and introductions and notes to new editions of the poems and novels that are valuable for his own account of his development as a poet and for the genesis of the novels.