Indigo Snake; one of the largest, blackest, and gentlest North American snakes. It is a favorite with showmen and snake keepers. The indigo snake seems to be distantly related to the racer snakes, but it differs from them in its slow movements and gentle disposition. 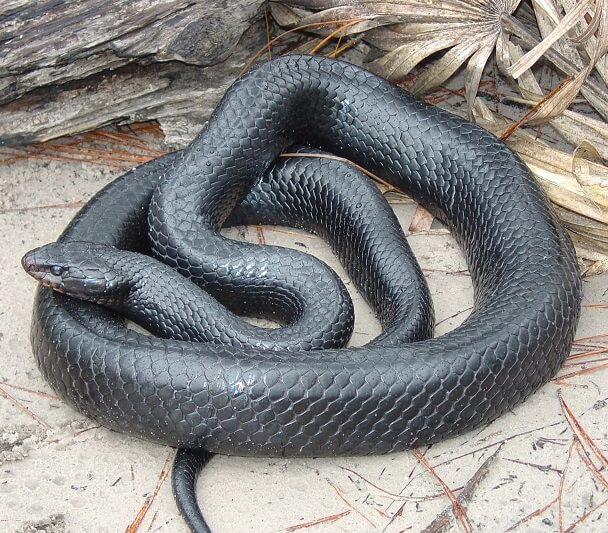 The true indigo snake is found in sandhills and pinewoods of the coastal plain from South Carolina to Florida and westward to eastern Louisiana. Close relatives occur from southeastern Texas to Brazil. The indigo snake is shiny bluish black above and below; a rust brown or reddish brown splash on the chin and sides of the head provides the only color. It may be over 8 feet (2.5 meters) long and may hiss and rattle its tail in a threatening manner when approached in the field, but it seldom attempts to bite humans, and it becomes tame immediately after capture.

Since it is neither a venomous snake nor a constrictor, the indigo snake usually feeds on relatively small animals, but it will eat any animal that comes along. It has been known to eat mice, birds, frogs, toads, snapping turtles, and other snakes.

The indigo snake, Drymarchon corais, is classified in the family Colubridae, a large family of harmless snakes. Other than its western and southern varieties, it has no close relatives.