What does a water lily look like? What are the caharacteristics and features of water lily? Information about water lily flower. 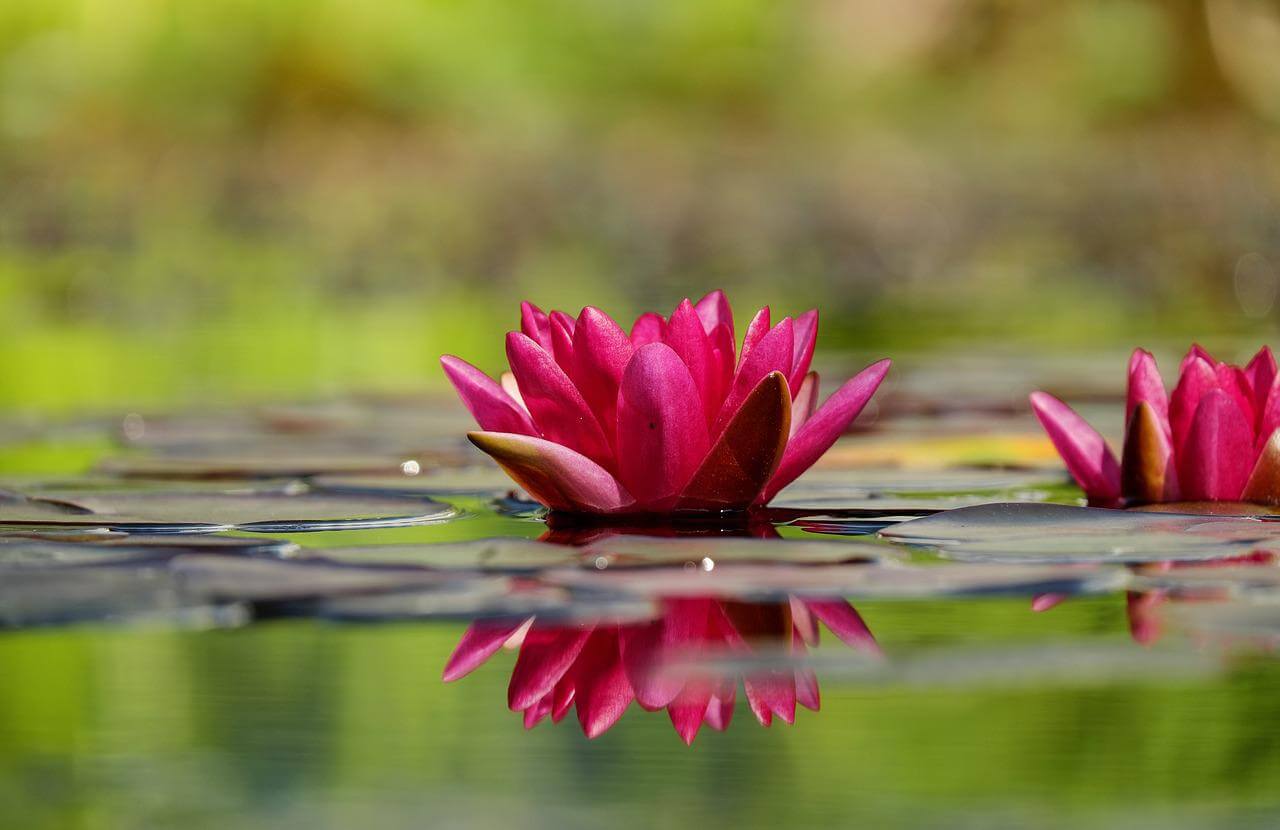 WATER LILY, a plant of the aquatic family Nymphaeaceae, and of the genus Nymphaea. These are found in fresh, still waters throughout the warm and temperate regions, and are often cultivated. Some can be raised easily from seed, and those which are hardy in the North will stand a very low temperature without damage, even to be encased in ice. They may be grown in tanks, or even in half-barrels, as well as in ponds. The tropical species must be raised nearly to blooming size in a greenhouse before being planted outside.

The water lilies are handsome plants, having more or less orbicular leaves, either floating, or more rarely immersed, and solitary flowers, of similar varying habit. The blossoms have four sepals and many petals, stamens, and carpels, the latter united and immersed in a thickened receptacle; in color they may be white, pink, yellow or blue, and are sometimes very fragrant. The flowers of some species open by day and close at night; others open at night and close by day. The duration of one flower is usually three days. If pollinated the flower is drawn to the bottom of the pond or tank by a bending or spiral coiling of the stalk.

The fruit is indehiscent, somewhat fleshy, and like a large berry filled with seeds. The seeds have small embryos and abundant starchy perisperm, and are enclosed in pulpy arils. When the seeds are ripe the pod breaks open irregularly. The seeds are borne to the surface of the water by the buoyant arils, where they repel each other and
float far and wide by changes in surface tension and by currents of water and wind. After one or two hours the aril contracts, breaks loose, and lets the seed drop to the bottom of the pond. Nearly all of the known 40 species have been brought into cultivation, and countless hybrids have been produced, both in the hardy and tropical groups. One of the finest is the Australian water lily (N. gigantea). Its flowers are sometimes a foot across, with hundreds of stamens, and the color is blue, pink, or white.

It does not close so completely at night as do other water lilies. The Egyptian lotus (N. caerulea) that was a favorite plant of the ancient Egyptians is often confounded with the Indian lotus (Nelumbo), but is really a blue-flowered water lily, with flowers borne on stiff stalks a foot above the water. It was a valuable plant to the decorators of Egypt, who copied it, and conventionalized its form in many of their architectural ornaments, and also introduced it constantly into their painted pictures of life and customs. Its rootstock and seeds served as food. The European water lily (N. alba) has white flowers that usually float upon the surface of the water. The flowers are not fragrant, as are those of the American water lily (N. odorata). The latter lovely water lily rides upon the water, with snow-white petals radiating in circles, the inner gradually narrowing, and passing by various stages into golden stamens in the center. They open in sunshine about 6 a.m., and close in the early afternoon. The fruit is ovate and baccate and ripens underwater.

The leaves, or lily pads, a favorite food of deer, are ovate-orbicular with a deep sinus, and have very long cylindrical stems of unvarying thickness, great flexibility, and toughness. The thick, fleshy creeping rootstock furnished a brown dye for the early settlers, and was also used as a styptic and tonic. A variety of this water lily is smaller and has rose-colored flowers. There are four other species of Nymphaea in the United States, including the golden-flowered water lily (N. mexicana) of Florida and Mexico.