What are the characteristics of rococo style? Information About Rococo Style

ROCOCO STYLE, an 18th century European artistic expression that was an outgrowth of the baroque. Rococo, a style primarily applied to decorative art, was marked by an exuberant playfulness that featured asymmetrical motifs, such as curves and countercurves and forms from nature—rocks, shells, flowers, vines, and leaves. Its most obvious manifestation was its use in interior architecture and design, although it represented a major period in French painting as well. Because of its decorative character, the rococo was also one of the pinnacles in furniture, porcelain, and landscape gardening design.

The rococo period coincided roughly with the reign (1715-1774) of Louis XV of France. It arose in France but spread rapidly throughout the Continent, notably to the south German states and Austria. It touched England only peripherally. 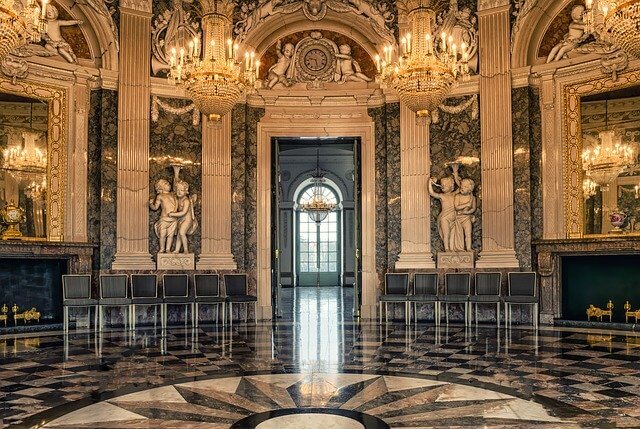 The rococo declined with the rise of neoclassicism in the late 18th century. Neoclassical critics denigrated the style as little more than a perversion of the baroque—bizarre, frivolous, and( ephemeral. Modern critics, however, take a more generous view, regarding the rococo as the artistic adornment of a refined, aristocratic age that revered beauty and openly sought gratification of the senses.

The origin of the word “rococo” is obscure. Most probably it derived from rocaille (rockwork), the term for rococo in France, analogous to barocco, the Italian word for baroque. French rococo is sometimes called the Louis XV style or the Pompadour style, after the king’s mistress.

In France, following the death of Louis XIV, there was a reaction to his monolithic, authoritarian regime. The Palace of Versailles, with its massive grandeur, was the architectural expression of that regime. In repudiation of the Versailles style, the nobility and the wealthy middle class built palaces and mansions ( hôtels) that were lighter in design and more intimate in feeling, with greatly refined decoration, such as the Hôtel de Soubise in Paris.

Rococo architecture reached its most elaborate form in the German-speaking countries. There, late baroque architects, such as J. B. Fischer von Erlach, had produced magnificent churches and palaces that tended toward the rococo. Inspired by these buildings, German rococo architects gave free rein to their imagination, achieving decorative effects that are overwhelming in their complexity, as in the Amalienburg (1734-1739), near Munich, by François Cuvilliés.

The best rococo painting was done in France. As German rococo architects had late baroque precedents, so French rococo painters had the example of Antoine Watteau, whose amorous fêtes galantes anticipated the spirit of the rococo. The greatest painters of the period were François Boucher and his student Jean Honoré Fragonard. Madame de Pompadour’s favorite artist, Boucher captured the pervasive sensuality of the rococo era in his Triumph of Venus (1740; National Museum, Stockholm).