Gog and Magog; a great power who, according to Biblical prophecy, will sweep down to destroy Israel “at the end of days.” Ezekiel 38-39 describes Gog “of the land of Magog, chief prince of Mesech and Tubal,” who will lead a mighty host of nations to attack Israel. God will intervene and shower hailstones, fire, and brimstone on Gog and his hordes. They will suffer utter defeat and be buried in Israel in the “Valley of the Multitude of Gog.” 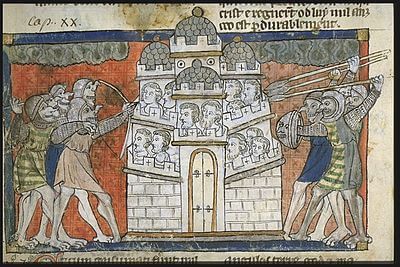 Many scholars have associated Gog with Gyges, king of Lydia (reigned about 685-652 B.C.). Magog is the name of both a land and its people. While no satisfactory identification has been found for it, it is generally thought to have corresponded to an area in Asia Minor.

In the New Testament (Revelations 20:8) it is Satan who summons Gog and Magog to battle. In later Jewish eschatology the war of Gog and Magog stood for the apocalyptic battle between the heathens and Israel: the prelude to the coming of the Messiah. In Arabic literature Gog and Magog (Yajuj and Majuj) were two mythical northern peoples whom Alexander the Great shut behind a great wall; they will reappear before the Day of Judgment and be destroyed by God.

In British legend Gog and Magog were two giants who were supposed to have been conquered and kept chained to the gates of a palace on the site of London’s Guildhall. Two effigies of the giants, 14 feet (4.2 meters) high, were put up in Guildhall as far back as the reign of Henry V. These were burned in the Great Fire of 1666, replaced in 1708, destroyed in an air raid in 1940, and again replaced by new figures in 1953.