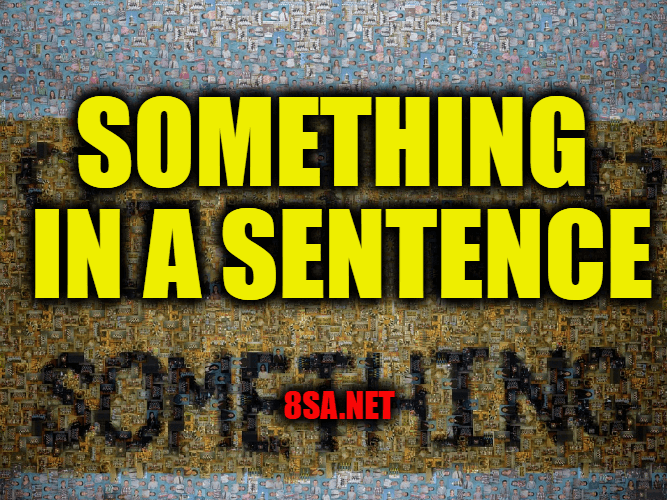 Examples of Something in a sentence

*** I had the feeling that something unpleasant was about to happen.

*** Before we got to the town, George has told us that we could get something to eat in a little backstreet.

*** I know it’s a boring journey, but the time will pass quite quickly if you read something.

*** Aging is something that a man has to accept.

*** She decided to accept the offer for lack of something better.

*** There must be something wrong with it because no one else has phoned.

*** I am fed up with my job. I am thinking of doing something else.

*** Can you smell something burning?

Something in a Sentence (Video)

*** I can feel something crawling up on my leg. It must be an insect.

*** The driver mumbled something, but was not particularly disturbed.

*** Although many writings have the sense of something like a political snub, also expresses a kind of sexed slave and appendix ideology.

*** We must believe, our talent is used to do something.

*** You can have them paint something especially for you.

*** That and the unwanted copies of Serpell’s report on the railways of Great Britain were something to stoke the fire.

*** Do you think the spider can entangle something?

*** They should look like something from a fair stand: a shrimp and a black giant tied up!

*** Anyone can arrange good vitualles, if they have something to cook.

*** These two paintings are almost nothing, but there is something about their calm presence, which is insistent and convincing.

*** He was handsome, no doubt, and something in him was strangely convincing, but by themselves they were not qualities that justified a featured article.

*** Every time you see something that seems convincing: a photo, a piece of cloth, a font, a word, return it to the board.