How do we use gravity in water supply systems? Importance of gravity for pumps, water systems and pressure.

Cities, towns, and many country homes have systems that supply water under pressure. This pressure makes the water flow out of faucets and hose nozzles. The easiest way of keeping up the pressure is to use gravity. A reservoir is built high up on a hill or in the mountains. Often the reservoir is made by building a dam across the valley of a stream. Water from the artificial lake behind the dam runs into pipes leading down to the city. Gravity pulls downward on the water. The place where the water runs into the pipes is much higher than the faucets in the city. So in all the lower parts of the water system there is great pressure. When you open a faucet, this pressure forces the water out. 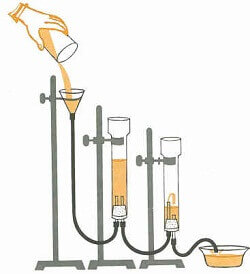 If little or no water is being used, each foot that the water stands higher than a faucet causes a pressure of .43 pound per square inch. Suppose the water in a reservoir is 100 feet above the faucet.

New York City and Los Angeles get most of their water by gravity from reservoirs many miles away. As these cities have grown, more and more water has been needed. So engineers had to go farther and farther to find places for reservoirs. Some of the water used in New York City is brought from the Catskill Mountains through pipes and tunnels 127 miles long. On its way down, the water passes through hills and under rivers. Water from a higher reservoir flows into another reservoir lower down, which is near the city. Then the water goes into tunnels and pipes that run under the streets to the buildings.

To avoid high pressure, the water is brought down to the city in sever al stages. From the back of a dam, water runs down through a big pipe to a powerhouse. Here the force of the moving water is used to turn water wheels, which drive generators that produce electric current. Then the water runs out into a reservoir lower down. From this reservoir the water flows on down to the next powerhouse. It passes through five powerhouses before it reaches Los Angeles. So gravity not only brings water to the city, but it also helps produce much electric current.

In many water-supply systems, pumps and gravity are used together to keep up the pressure. The pumps take water from wells or from streams and lakes and force it into the pipes that lead to the buildings. These pipes are also connected to some kind of water tower, or elevated reservoir. When little water is being used, the pumps force the extra water up into the tower. Then when much water is needed, gravity makes the stored water run down into the pipes. In this way, gravity helps the pumps keep up the pressure.

Gravity has an important effect in any water-supply system. Because gravity is pulling down on the water in the pipes, there is always more pressure at faucets on the lower floors of a build-ing than at faucets higher up. If all the faucets in a skyscraper were connected to one pipe, the pressure on the lower floors might be over 300 pounds per square inch when the pipe is full. Of course, this pressure would be too high for ordinary faucets and plumbing fixtures. To avoid such great pressure, the builders of skyscrapers often install a supply tank for each ten floors. All the tanks are filled by pumps in the basement. Then from each tank water runs down by gravity to the ten floors below. So there is enough water pressure on every floor but not too much anywhere.