What is Grafting? What is the purpose of Grafting? Grafting types and their expanations. Information about Grafting.

Grafting; If a twig with a bud from a pear tree is carefully placed in a slit made in the bark of a quince tree, a pear twig will grow, and at fruit time that twig will bear pears while quinces will grow on the rest of the tree. In the same way, an almond tree can be made to produce both peaches and almonds, or a crab apple tree can be made to bear a crop of cultivated apple. This art is called grafting.

The chief advantage of grafting is that it makes it possible for a gardener or a grower of trees and shrubs to make sure that the young trees will bear the same quality and variety of fruit as the parent tree. It is possible to grow trees or shrubs from seeds, but no one can tell for certain that they will be as good as the plants from which they came. However, when a twig is taken from a tree and grafted into another tree, it is sure to produce the same type of fruit that is produced by the parent tree.

Another advantage of grafting is that sturdy trees or shrubs can be grown by grafting many half-hardy and delicate plants on stocks which are hardy and can resist disease. Some stocks are used to grow dwarf apples, pears and other fruits. Flowering shrubs can also be grafted, the best example being roses.

There are many methods of inserting, or placing, the budded twigs, known as scions, in the full-grown plant, then known as the stock, but two rules must always be followed. The first is that only related trees or shrubs can usually be grafted. Thus apples can be grafted on pears and quinces, which are related to apples, and peaches can be grafted on apricots, almonds, plums or other stone fruits; but it is impossible to graft apples on elms or apricots on oaks. If this is done the scions will not grow.

The second rule of grafting is that the cambium layer (the layer under the bark which carries the necessary sap to the tree) of the scion must touch the cambium layer of the stock, otherwise the grafted twig cannot grow.

There are several different kinds of grafting, among the simpler kinds being budding, whip and tongue grafting, cleft grafting, side grafting and saddle grafting. 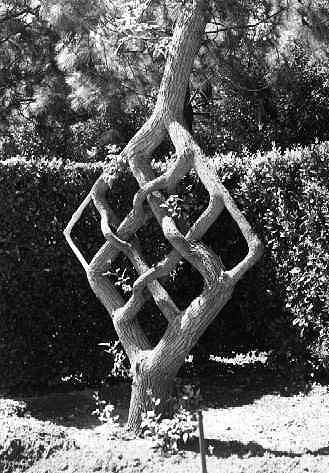 An example of approach grafting by Axel Erlandson. (Source : wikipedia.org)

Bud Grafting or Budding: A single bud is inserted under the bark and against the cambium layer of the stock. Budding should be done in the summer.

Whip or Tongue Grafting: This is generally done when the stock and scion are both about the same size. The end of the scion is cut so as to leave a tongue-shaped piece of wood, and another cut is made in it. Then the scion is fitted into the stock, which has been prepared in much the same way. Roots a year old are usually used as stocks. They are dug up and the scion is cut in the autumn after the sap has stopped running. The actual process of grafting is done in late winter, and the grafts are then packed in moist sand and planted out of doors in spring.

Cleft Grafting is not a very common method of grafting. The trunk or the main branches of the stock are split to form clefts, and wedge-shaped scions are inserted into these clefts.

Side Grafting is used when the gardener wants to insert the scions without cutting off the top of the stock. It is like budding except that instead of only one bud, a twig with two or three buds is used. A slit is made in the bark of the stock and the scion is inserted in it.

Saddle Grafting is generally used for rhododendrons. A V-shaped cut is made in the scion and the end of the stock is whittled to a point so that the scion will fit over it like a saddle. 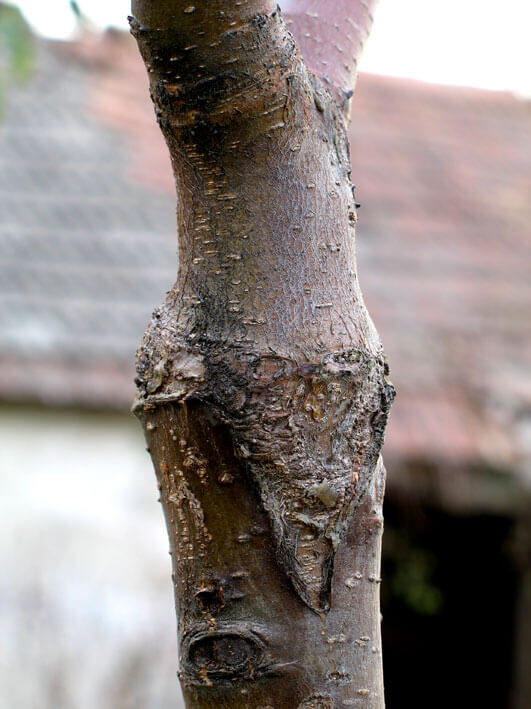 Whatever method of grafting is used, it is always necessary to seal the joint with grafting wax, in order to cover the cut edges. Sometimes it is also necessary to bind the graft firmly in place with soft, light string.

There are many specialized methods of grafting, but a person who is learning grafting should first try the simpler forms. When he can do these properly he may then learn the more unusual forms of grafting and budding used for special plants.