What are the characteristics of tuna fish? Information about the features, types, bahavior, facts and habitat of tuna fish. 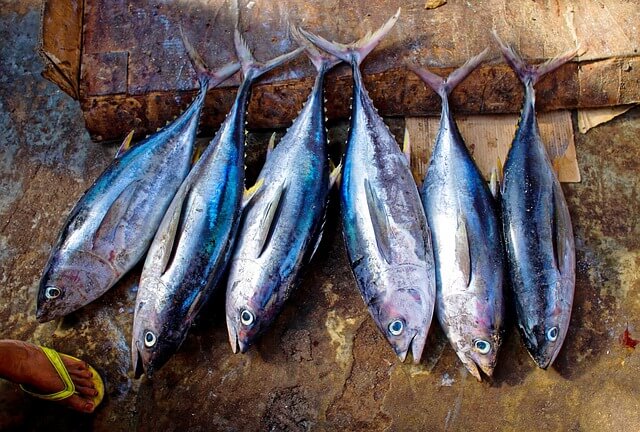 TUNA, also sometimes called tunny, any of a group of marine fishes inhabiting tropical, temperate, and even cool waters throughout the world. Most are highly prized for food and game.

Large tunas may weigh several hundred pounds, whereas small tunas reach only about 20 pounds (8 kg). All are streamlined and fast swimmers. They are unique among fishes since they may have a body temperature up to 20° F (14° C) higher than the water in which they are swimming. A tuna characteristically has a spindle-shaped or fusiform (cigarlike) body, a bluntly pointed head, a slender tail region, and a widely forked tail fin.

There are two dorsal fins—the first spiny and depressible into a groove and the second soft-rayed and followed by finlets. The pectoral fins, which are sometimes long, and the pelvics, which are always small, also fit into depressions. The different species of tuna can be identified by body color and fin length. Many are very important commercially. Albacore, yellow-fin, skipjack, and bonito produce white meat, while small bluefin yields light meat.

The bluefin tuna, the largest of the tunas, is an important commercial fish and is the species most often referred to as the tuna. Bluefin tunas are found throughout the world but are most often caught in the temperate and subtropical waters of the Atlantic Ocean from northern Newfoundland to the West Indies. Bluefin also occur off the southern coast of Iceland and from Norway to the Mediterranean. Separate populations inhabit waters around Australia, Japan, and from California to the Gulf of Alaska.

The bluefin tuna is reported to make transatlantic migrations from the western Atlantic to the Bay of Biscay. In winter and spring they remain in subtropical waters, moving northward during the summer. Inshore, bluefins eat herring, mackerel, silver hake, and other fishes, squid, and euphausids, while some offshore specimens have been found to eat deepsea fishes. Bluefins are preyed on by killer whales.

The Straits of Florida and the adjacent Gulf of Mexico are thought to be major spawning areas for the western populations of bluefin tuna. Spawning there occurs from March to October, reaching a peak in May and June. Spawning of the eastern population occurs in the Mediterranean from late April until mid-July. A single female may lay one million or more eggs.

The bluefin tuna is of great commercial importance. There are three major fishing concentrations—in the Atlantic off the coast of the United States, in the eastern Pacific from California to Peru, and off the northwestern coast of Africa. Japan leads the world in the amount of tuna caught.