Tiberius (Roman Emperor); (42 b.c.-37 a.d.), was the second Roman emperor. He was born in Rome on Nov. 16, 42 b. c., the son of Tiberius Claudius Nero and Livia. Livia divorced his father in 38 b. c. to marry the future Emperor Augustus. A few months later Livia had her second son, Drusus, by Tiberius Claudius Nero. 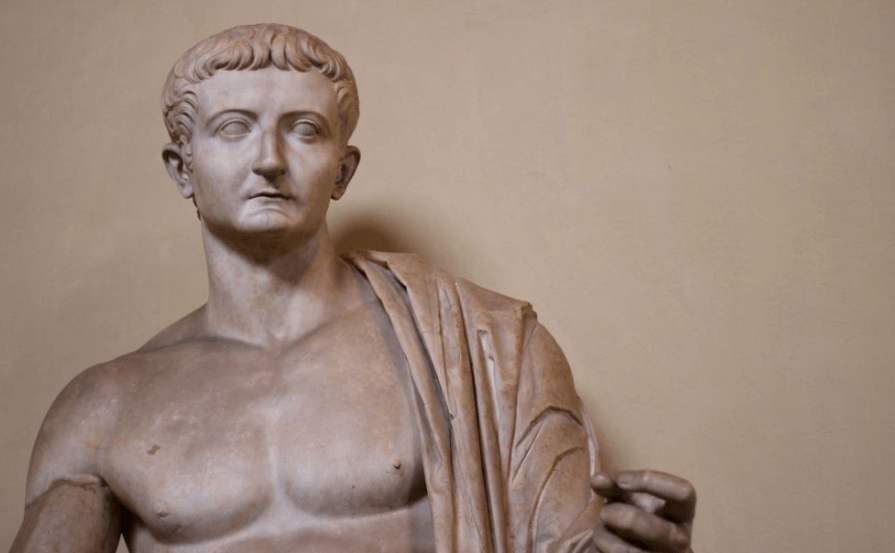 When he was nine, Tiberius delivered a public funeral oration for his father. From that time he and his brother Drusus were raised under the tutelage of Augustus. In 20 b. c., in his first significant public act, Tiberius received in the East the standards that Rome had lost to the Parthians. Afterwards Tiberius was groomed as a general. He served in Pannonia and, after Drusus’ death in 9 b. c., in Germany.

In 12 b. c., after the death of Augustus’ friend Agrippa, Tiberius was forced to divorce his wife Vipsania and to marry Julia, Agrippa’s widow and Augustus’ daughter. Many believed that Tiberius would be designated as Augustus’ successor. In 6 b. c., Tiberius was given a share of the tribuni-cian power, previously held only by the emperor and his heir-designate. But in the same year Tiberius discovered that Augustus secretly hoped that his grandsons, Gaius and Lucius Caesar, would be his heirs. Tiberius haughtily retired to Rhodes, where he remained until 2 a. d., the year Lucius died. In 4, after the death of Gaius, Augustus, who had no other heirs of age, adopted Tiberius and made him his heir. Tiberius was forced to adopt Germanicus, his brother Drusus’ son.

During the last 10 years of Augustus’ reign, Tiberius was virtually co-regent. He commanded armies in Germany, Pannonia, and Illyricum. When Augustus died in 14, Tiberius was firmly entrenched and encountered little opposition as emperor, except temporarily among the legions in Germany and Pannonia.

Ruins of one of Tiberius’ villas on Capri

Tiberius’ administrative policies were generally wise, and he tried to follow Augustus’ precedents. Tiberius adopted a defensive foreign policy and concentrated upon strengthening the imperial frontiers. For the most part his reign was peaceful, and the imperial provinces were governed well. A frugal emperor, he left a wealthy empire.

But Tiberius was a very unpopular emperor. His reign was marred by murderous family quarrels and by his own distrust of the senatorial aristocracy. In 26, Tiberius retired to the isle of Capri and governed from there for the rest of his reign. Until 31 he was under the evil influence of his adviser Sejanus, who encouraged Tiberius’ suspicious character. In that year, Sejanus conspired to overthrow Tiberius, but Tiberius detected the conspiracy and inaugurated a reign of terror by executing Sejanus.

His heir, Germanicus, had died in 19 and most members of Germanicus’ family died mysteriously or were executed. Tiberius’ son Drusus had been poisoned. Tiberius chose as his heir Germanicus’ son Caligula, who had been too young to become deeply involved in the political animosities of Tiberius’ reign. Romans rejoiced when Tiberius died on March 16, 37, in Campania, and the terror ended.