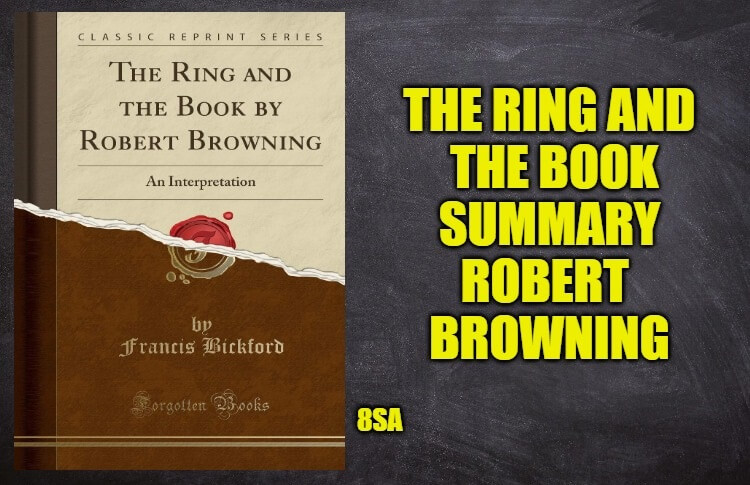 The Ring and The Book

“The Ring and the Book” is a long narrative poem by Robert Browning that tells the story of a legal case in medieval Italy. The poem is divided into 12 books, each of which is written from the perspective of a different character involved in the case. The case centers around Guido Franceschini, a wealthy nobleman who is accused of murdering his wife and children.

The poem begins with the narrator introducing the book that serves as the source material for the poem, a 17th-century manuscript that contains accounts of the trial. The poem then proceeds to tell the story of the case through the eyes of various characters, including Guido, the prosecutors, the defense attorneys, and the witnesses.

Throughout the poem, Browning explores themes of justice, guilt, and the nature of truth. He also delves into the psychology of the characters and their motivations for their actions. The poem ends with the narrator reflecting on the nature of the story and its relevance to the present.

“The Ring and the Book” is considered to be one of Browning’s masterpieces and is noted for its complex narrative structure, intricate characterization, and exploration of moral and ethical issues.

The Ring and The Book a poem by Robert Browning, written between 1864 and 1868 and published in four volumes, one each month in November and December 1868 and January and February 1869. The “Book” was the “Old Yellow Book,” the source of the poem, and the “Ring” was one which Browning wore on his watch chain, the gift of Mrs. Browning. The meaning of the title is this: the Book was like pure gold in that it was too soft to work; therefore the alloy, Browning’s imagination, must be added to make the Ring which is the final artistic product.

The Old Yellow Book, which Browning picked up for eight pence at a bookstall in Florence, Italy, in June 1860 was a collection of material dealing with the murder trial of Guido Franceschini and his four servants. Someone, possibly the Franceschini lawyers in Florence, collected the briefs submitted in the case, the pamphlets issued at that time for public consumption, and manuscript letters and documents, which constituted only one tenth of the whole. The lawyers’ briefs, in the legal Latin of 1698, are difficult reading because of the difference between that Latin and the classical Latin of Cicero’s time. It is doubtful, therefore, that Browning understood everything in them. The remainder of the material is in Italian. In 1862 he received from a Mrs. Baker an additional manuscript account of the trial which is usually referred to as the “Secondary Source.”

The facts upon which The Ring and the Book is based are these: Pietro Comparini and his wife, Violante, were middle-class citizens in Rome who were in comfortable circumstances largely because of a trust fund which they inherited. As they had no children, and Violante wanted to keep the money in the family, at the age of 48 she led Pietro to believe that she had given birth to a child, Pompilia, on July 17, 1680. However, the child was that of a woman of the streets with the father unknown. During the years of Pompilia’s childhood the sons of Count Tommaso and Donna Beatrice Franceschini of the hill city of Arezzo in Tuscany, a second-rate family, were trying to improve their fortune in Rome. Paolo, the eldest, entered the church, became secretary to a cardinal, and finally secretary of the Order of St. John of Malta. Guido, the youngest, born Jan. 24, 1658, did not enter the church but tried to advance himself as a layman in the service of churchmen. Because he was unsuccessful, he and his brother planned that he should marry for money, and their choice rested on Pompilia Comparini. Having nothing but his name to offer, Guido had some difficulty with Pietro who finally agreed to terms: a dowry of 520 pounds, of which Pietro paid down 140 pounds, and the transfer of all of his property to Guido. In return Guido was to keep the Comparini for the rest of their lives. In a public wedding Guido married Pompilia on Sept. 6, 1693, and in December they all went to the family home in Arezzo. By the following April (1694), the Comparini had had all they could stand in Arezzo, for Guido treated them badly, and they returned to their house in Via Vittoria in Rome. It was then that Violante revealed the fact that Pompilia was not their child.

On the basis of this fact Pietro at once brought suit to cancel Pompilia’s marriage settlements ; but, Guido, denying the truth of Violante’s statement, fought back. The court decided that the child was not that of the Comparini, but since Guido was innocent of the fraud, the marriage should stand. Both sides appealed the decision but none had been rendered by the end of their lives. Until April 29. 1697, Pompilia lived with Guido, but on that day at 1 a.m. she left the house and started for Rome in the company of Giuseppe Caponsacchi, canon and subdeacon, a young man 25 years old, who for this occasion wore lay dress. On the morning of April 30, Guido caught the pair at an inn at Castelnuovo where they had spent the night. They were arrested and at a trial in Rome were convicted. Caponsacchi was sentenced to three years relegation in Civita Vecchia and Pompilia to confinement in the nunnery at La Scalette.

Three weeks later, still under the custody of the court, Pompilia was transferred to the home of the Comparini in Via Vittoria. On December 18, Pompilia gave birth to a child, Gaetano, who appears to have been sent out to nurse. On December 24, Guido with four of his servants arrived in Rome from Arezzo; on the evening of January 2, he and his men entered the house in Via Vittoria, killed Pietro and Violante, and fatally wounded Pompilia. On January 3, Guido and his men were captured at Merluzza; on January 6, Pompilia died. The trial of Guido and his associates took place in January and February. Convicted of murder on February 18, Guido appealed to the pope, but on February 21 the appeal was denied. On Feb. 22, 1698, they were executed. Guido, because of his rank, was decapitated, the others were hanged.

Although Browning maintained that he told the story just as he found it in the Old Yellow Book, he made a number of significant changes, either purposely or because he misread the text. Most important is the change in Pompilia’s character. Probably under the influence of the memory of Mrs. Browning, he changed Pompilia to a fine spirited person of impeccable purity. The facts are that she was caught in a compromising situation at Castelnuovo and tried to lie out of it. There is also no evidence that Caponsacchi was a representative of the church rescuing a lady in distress. His assumption of layman’s clothes robbed him of any priestly powers (if he was a priest), and a night at Castelnuovo did not fit a holy mission. Browning also invented a secret wedding for Guido and Pompilia, engineered by Guido and Violante, while in reality it was a regular wedding in their parish church and so recorded in its register. He also gave the Comparini a villa in the Pauline district of Rome and placed the murder there; the Comparini had only the house in Via Vittoria and were killed there. All of this has come to light since the publication of the Old Yellow Book in 1908.

The Ring and the Book is the result of Browning’s creative genius working upon the material. Using the method he could handle best, the dramatic monologue, and an unusual narrative structure, he has recreated these men and women and presented their story. Books I and XII introduce and conclude the story, and are told directly by Browning; the other 10 books retell the story from the point of view of each speaker. Books II, III, and IV are narratives by persons who are wholly unconnected with the story, but with the usual certainty of neighborhood gossip there is nothing which they do not know. The speaker in Book II is pro-Guido; in Book III, pro-Pompilia; and, in Book IV, presents the evidence on both sides but draws no conclusions. Book V is Guido’s defense, a brilliant piece of special pleading.

Book VI is Caponsacchi’s apology for his life, showing how, through his knowledge of Pompilia, he had changed from a worldly life to a spiritual one. Book VII is Pompilia’s sweetly forgiving account of her life in which all had gone wrong. Books VIII and IX are spoken by the defending lawyer and by the prosecuting attorney, and cleverly portray the characters of these men as Browning conceived them. Book X is the Book of Pope Innocent XII who passed judgment on all persons involved, judgment which can be considered to be Browning’s own, for there is no record of the pope’s reply to the appeal. Book XI is Guido’s monologue on the night before his execution in which he reveals the essential baseness of his character. The story of the execution and the end of the matter constitutes Book XII. In these 21,000 lines, Browning has given us the brilliant creations of Guido, Caponsacchi, and Pompilia, not as historical persons but as studies in the human character. Because each speaker is involved in his own point of view, the retelling of the story 10 times does not bore the reader, but rather increases his desire to see how each person will treat the same incidents. The brilliance and creative power of Browning is nowhere more evident than in The Ring and the Book.