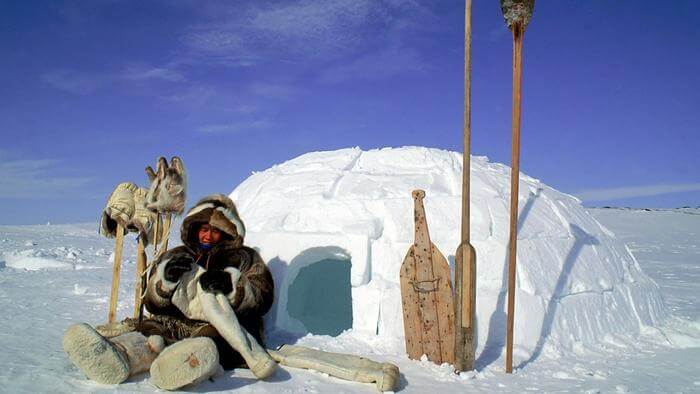 The Origin and History Of Eskimos;

The origins of the Eskimos have been difficult to ascertain. For many years it was presumed that the Eskimo way of life first arose among the Upper Paleolithic reindeer hunters of northern Europe, but this thesis is no longer acceptable. A second outmoded theory postulated that Eskimos were derived from northern Indians concentrated somewhere to the west of Hudson Bay.

The most likely region of Eskimo cultural coalescence is now thought to be in westem Alaska. Here Eskimos are geograjihically near both of their linguistic relatives, the Aleuts and the eastern Siberians. Furthermore, the greater linguistic diversity existing in the Yupik spoken in southwestern Alaska points to Alaska as a focal point from which they emerged. Conversely, the Inupik spoken from Nome, Alaska, to Greenland varies only slightly, suggesting that the speakers represent a population recently expanded from Alaska.

Eskimo origins are best associated with a time period archaeologists have termed the Arctic Small Tool tradition, which dates from around 4000 b. c. in the Bering Strait region. The flaked stone artifacts and the places in which they are found in Alaska suggest that their makers hunted seals along the coast and that they also ranged inland for caribou. One of the key adaptations made by Eskimos during their emergence was the development of a flexible subsistence base that permitted the exploitation of both marine and land mammals in a tundra zone. The Arctic Small Tool tradition offers the earliest and best evidence of this combination. The Old Whaling period in northwestern Alaska, dating from about 1800 b. c., may readily be identified with Eskimos. The economy was based on a well-developed sea-mammal-hunting complex, and the people lived in multiroom, semisubterranean winter dwellings made of driftwood logs. By 700 b. c., Alaskan Eskimos made crude pottery, and their stonework technology began to shift from the flaking of flint tools to the grinding and polishing of slate implements. By the early Christian era most Eskimo artifact styles had been developed, and they endured until after sustained contact with Europeans.

By 500 a. d., typical manufactures included large and small toggle-headed harpoons for killing whales, walrus, and seals. The woman’s knife, or ulu, with an ivory handle and crescentshaped polished slate blade was present. The kayak and the umiak were also in use. 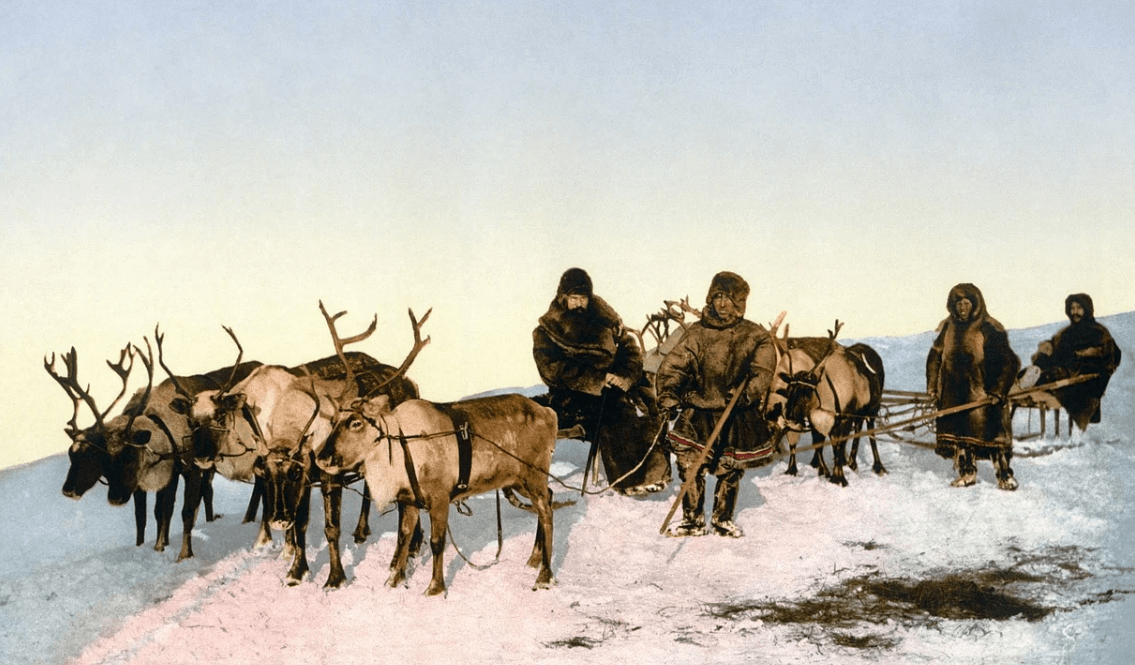 The emergence of Eskimo culture in Canada, Greenland, and Labrador resulted primarily from the spread of people and ideas from Alaska. The basic culture then assumed distinct local characteristics in diverse areas. Contacts between Indians and Eskimos occurred in prehistoric times, but since these people exploited different environmental zones, their borrowings from one another were minimal.

Initial contacts between diverse Eskimo groups and people of European background spanned nearly 10 centuries. The first such meetings took place between Norse settlers and Eskimos in western Greenland during the llth century a. d. After the Norse became extinct in this region during the 15th century, contact with Eskimos of this sector was not reestablished until 1721. The Eskimos in southeastern Greenland, on the other hand, were not located until 1884. Central Eskimos visited Martin Frobisher, the English explorer, when he was on Baffin Island in 1576, but the Central Eskimos living along Coronation Gulf in northern Canada were not contacted until 1914. The core of the Alaskan Eskimo area was not effectively penetrated by the Russians until after 1818.

Throughout the north, initial contacts with explorers were followed customarily by the arrival of traders anxious to obtain furs, and by missionaries intent on converting the people to Christianity. Throughout most of the early contact period it was primarily traders and missionaries who introduced European ways. Över much of the far north government administrators, teachers, and law enforcement agents did not arrive until about the beginning of the 20th century or even later. Intensive contacts between Eskimos and Euro-Americans have been a recent development. Eskimos readily accepted the iron tools, blankets, clothing, and certain foods offered by the traders in exchange for furs.