This is a very controversial number since there is not much agreement with a single event or destiny; but with much more than that.

In this investigation we will relate several points for the understanding and determination of this number that some people see often. When we are on the street and suddenly we watch our watch we get the surprise that it is 3:33 and we simply do not take importance, but when this happens very often. If you are one of those people do not be scared does not mean something catastrophic but you have to take it easy so you can understand well and draw your own conclusions. 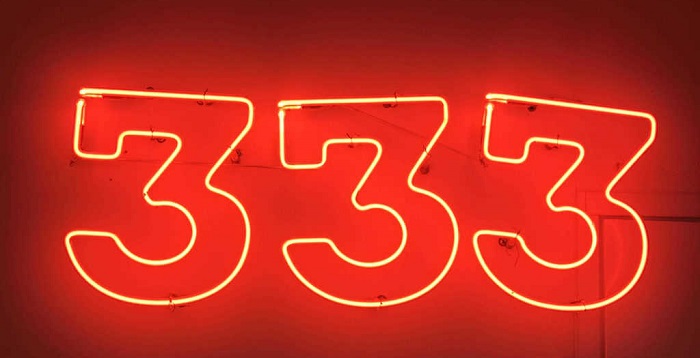 Let’s start with some beliefs:

Self-expressive in many aspects and with communicative capacity; It is the sign of artistic expression, sociability, sympathy, superficiality and wasteful spirit. Symbol of communication, interaction and neutrality. Tireless optimism, happiness and enjoyment of life. They can be fun lovers.

Sometimes it is associated with inspiration and imaginative intelligence with special abilities. They are also people with a sense of humor, and capable of identifying and generating the most important ideas that can become key in the spheres of thought, institutions or companies.

On the negative side they are prone to the dispersion of their efforts, exaggeration, unfinished projects, lack of direction …

The angels do the best they can to get our attention and communicate with us. In this way they help us to heal our own lives. However, we often ignore these signals they give us, discarding them as simple coincidences product of our imagination. The angels say: We can not write our messages for you in heaven. You have to pay attention and believe when you see some patterns forming in your life especially in response to some questions or prayers that you have made. When you listen to the same song repeatedly or see the same number sequence, who do you think is behind all this? Your angels, of course!

Your angels usually communicate their messages by showing you sequences of numbers. They do this in two ways. First, they whisper subtly to your ear so that you look just in time to notice the time on the clock or a phone number on a billboard. The angels expect you to realize that you are seeing the same number sequence repeatedly. For example, you may be watching sequence 111 frequently, and it seems that every time you look at the clock the time is 1:11 or 11:11.

The second way that angels show you numerical sequences is by physically arranging them so that, say, a car passing in front of you has the specific license plate number you want to see. Those who are aware of this phenomenon become adept at reading the meanings of various plate numbers. In this way, the angels will truly give you detailed messages. Next, the meaning of several numerical sequences is described. However, your own angels will tell you if your situation has a different meaning for you. Ask your angels, what are they trying to tell me? and they will gladly give you additional information to help you decode their numerical meanings.

With regard to Catholicism there is the biggest question about the number 3, 33 or 333 since the death of Jesus of Nazareth occurs:

Easter fell on Saturday or Friday. According to we believe that the crucifixion was the eve or the same day of the Passover. In the first case the candidates are the 30s and 33s, with all the other years being absolutely excluded. Using the second assumption, the year 30 has a low probability (it requires a sighting of the Moon at only 8 ° of the horizon) and for year 34 we would have to suppose that the priests delayed the beginning of the year by one month, possibly because the Full Moon on March 25 was too close to the equinox. For the months and years that could correspond to those of the death of Jesus.

Between the two possible years, 30 and 33, there are strong historical reasons in favor of the second. Otherwise it would compress the preaching of John the Baptist (who died before) and of Jesus himself a few months long. Between 33 and 34, we prefer to follow the majority tradition that places death on the eve of Easter.

Consequently, Jesus of Nazareth would have been crucified on Friday, the 14th of Nisan in the year 19 of Tiberius Caesar. According to Pontius Pilate, who was already using the new calendar established by Julius Caesar, the date was the third day before April, with consuls Lucio Livio Ocella and Lucio Cornelio Sila. For an astronomer of that time, the death occurred on 22 Pharmouthi of the year 780 of the Nabonassar era, according to the Egyptian calendar used until the times of Copernicus. An astronomer today would say that it happened on the Julian day 1,733,204, while for the common mortals, finally, the date of the crucifixion was on April 3 of year 33, at 3 o’clock in the afternoon, Jerusalem time .

In Freemasonry we find the relationship and the importance that they also put on numbers. As far as the Masons are concerned, they are divided into “feminine” (the pairs) and “masculine” (the odd ones). The number 1 presents the divinity; the 2, the darkness; 3, is the perfect number and indicates harmony; 4, is the divine number; 5 indicates light, marriage and nature, being defined as hermaphroditic number, being composed of 3 (masculine) and 2 (feminine); 6, indicates health and justice; 7 is the venerable number; 8, represents the friendship by indicating the first cube: 2 + 2 + 2 + 2 = 8; 9, is the number considered finite; 10, finally, indicates heaven because it preserves all harmonic relationships: 1 (masculine) + 2 (feminine) + 3 (harmony) + 4 (divine number).