The House of Bernarda Alba

La casa de Bernarda Alba is a play in three acts written in 1936 by Federico García Lorca. It could not be premiered or published until 1945, in Buenos Aires and thanks to the initiative of Margarita Xirgu. It exposes the story of Bernarda Alba, who after being widowed for the second time at the age of 60, she decides to live the next eight years in the most rigorous mourning for her. Lorca describes the deep Spain of the beginning of the 20th century,2 characterized by a very violent traditional society in which the role that women play is secondary. Other prominent features are religious fanaticism and fear of discovering intimacy. Her five daughters live with Bernarda (Angustias, Magdalena, Amelia, Martirio and Adela), her mother and her two maids. Among the latter is Poncia, a servant who has lived thirty years in the service of the old woman. 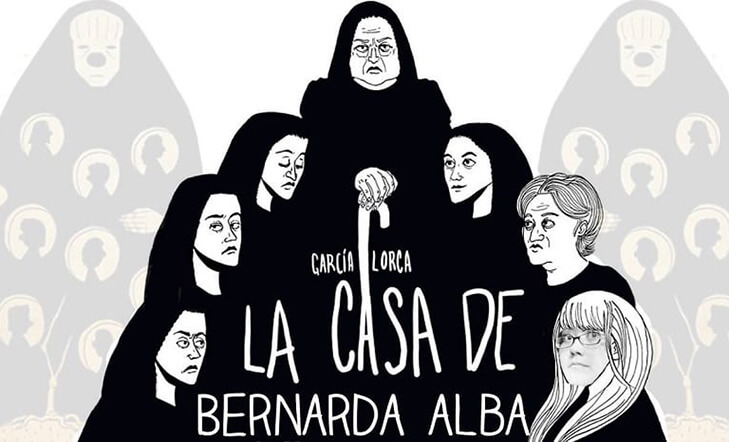 The story begins in Bernarda Alba’s house, where two maids clean the room while they talk about the lady. Bernarda is portrayed as a woman who arouses fear and repulsion in others, while she is described by two people who work for her and do not like her. It is these maids, moreover, who allow us to know the story of Bernarda: a woman with five daughters, highlighting Angustias, her eldest, who is 39 years old and is the daughter of her first husband. After this conversation, a beggar appears asking for money, which she takes advantage of to pronounce a monologue that shows the contrast between rich and poor.

Bernarda, the protagonist, appears with other women from the town who have attended the funeral of her husband. Bernarda is presented as an authoritarian woman with the maids, reflecting the inequality between rich and poor. They inform Bernarda that Pepe el Romano is also there, but she refuses to receive him.

Later, it is seen how Bernarda is related to her five daughters. She explains that they must all mourn for the death of her father for eight years, and during all that time they must dress in black and not interact with any man. One of her daughters, Magdalena, complains because she wanted to get married, but Bernarda’s authority is stronger. María Josefa is also introduced, the girls’ grandmother and Bernarda’s mother, who is locked in a room because her daughter does not want the women of the town to see her. Poncia, one of the maids, insinuates that Angustias spends her nights listening to the men talk from the window. Here we discover that Bernarda does not allow her to marry any man, even less if it is a peasant or someone from the lower class.

One of the main themes of the story comes into play: the clash between the women of yesteryear and the women of today. She shows up with Bernarda’s daughters, who are obsessed with men. Adela, the youngest, dresses up in a green dress while Angustias is nervous, making her sisters mock her because they think she is waiting for Pepe el Romano. Indeed, Pepe is outside waiting for Angustias, who comes out to see him, and the sisters look out the window to witness the scene.

We are also told the story of María Josefa, the antithesis of her daughter Bernarda de Ella. She appears with flowers on her head and on her chest, with a jovial and happy attitude that embarrasses Bernarda, who reprimands the maid for letting her mother leave her room. It is known that Bernarda hides her mother due to her madness, since she could cause a stir in the town and affect her reputation.

Poncia is with Bernarda’s daughters, sewing in silence to prepare for Pepe and Angustias’ wedding. She realizes that all her sisters envy her, which makes her behave aggressively towards them. However, she Poncia comments that Pepe was at Adela’s window until dawn, who fervently denies it.

Convinced that Adela is in love with Pepe, Poncia talks to her alone. She advises Adela to leave her older sister alone, but Adela threatens Poncia, hinting that the maid is indeed right. Adela is also upset because she listens to men on the street and yearns for the freedom they have in the society in which she lives.

Martirio and Amelia, also daughters of Bernarda, are left alone. Martirio confesses that he also suspects Adela and Pepe, because the last few nights he heard noises under her sister’s window. Then, Angustias appears very angry because her picture of her fiancé Pepe has disappeared. She accuses her sisters of having stolen it and Bernarda appears to calm the girls, ordering Poncia to check the rooms. They find him in Martirio’s bed, who defends himself by saying it was a joke. Adela, jealous, gets angry and Martirio, who feels attacked, confesses her suspicions about Adela and Pepe.

Poncia and Bernarda talk alone about the wedding. Bernarda believes that Angustias should get married as soon as possible to prevent her from having fights between her daughters, and Poncia insinuates that it is all because Adela and Pepe are having an affair behind Angustias’s back. Bernarda doesn’t believe her, thinking that she, being a servant, tends to lie. Angustias listens to the conversation between her mother and Poncia, and says that Pepe has been leaving at one in the morning for several days, but Poncia says that she listens to him until after three.

Meanwhile, Adela and Martirio have a heated argument, since the former believes that her sister is also in love with Pepe, but Martirio continues to insist that it was a joke. Adela pushes until Martirio can’t take it anymore and confesses that, indeed, she also has feelings for Pepe.

Bernarda and her daughters are in the patio with Prudencia, a family friend. Prudencia tells that her husband has disowned her daughter for an offense, and Bernarda defends the man to Prudencia’s surprise and sadness. After dinner, Angustias stays to talk to her mother. Angustias fears that her fiancé is cheating on her, and Bernarda advises her not to look for explanations and settle for the situation. On her part, Adela and Martirio argue again about Pepe, and Bernarda has to intervene.

Later, Poncia and Bernarda speak alone again about the situation in the house. Bernarda assures Poncia that she has her daughters under surveillance so that they continue to be sweet and polite, but Poncia insists that this is not working and that she continues to suspect love idylls behind Angustias and Bernarda’s backs. Later, Poncia and another maid listen to the dogs barking nervously. Immediately afterwards Adela appears with the excuse that she is thirsty, something that will make the maids even more suspicious.

María Josefa reappears, this time behaving with an enchanting freedom. On her part, Adela appears to get into the corral, followed by Martirio. Martirio approaches the door of the corral where her sister enters and calls out to her; Adela comes out with disheveled hair and Martirio, jealous, admits that she is in love with Pepe. Adela recognizes that she is Pepe’s lover and Martirio screams to wake up her mother and her sisters.

Bernarda rushes over and, seeing the situation and listening to Martirio’s explanations, she prepares to hit Adela with her cane. Adela takes it from him, so Bernarda, angry, leaves and returns with a shotgun. She enters the corral and a shot is heard, and it is said that Bernarda has killed Pepe, something that turns out to be false. Adela, who does believe that her mother has killed Pepe, runs to her room and locks herself in. When they manage to open the door, they discover that she has committed suicide.

Analysis of The House of Bernarda Alba

Bernarda Alba’s house is one of Lorca’s most applauded pieces, and rightly so. Despite having been written in 1936, it was not until 1945 that it was performed on stage due to the amount of social criticism contained in its lines.

The characters, through their different personalities, each understand in their own way the main theme of the play: honor. Bernarda, who gives her work its name, is a woman obsessed with the image that others have of her and her family, and she puts this reputation before her values ​​and her daughters. They, for their part, yearn for a funnier and freer world, where it doesn’t matter what they say, but being the masters of their own lives.

In addition, Lorca shows in La casa de Bernarda Alba how a cruel and authoritarian society with women can poison them to the point of murdering them out of hatred, envy and jealousy. While Pepe el Romano does everything he wants and plays with the hearts of the sisters, they fight for his love; some for rebellion, others for reputation. This also makes clear the power of money and of the upper classes over the lower classes, as represented by Poncia and Bernarda, separated by an impossible wall to cross.

La casa de Bernarda Alba is a work about what is said, but, above all, what is kept silent. How blindly following the rules of an unfair society, repressing desires and hiding truths, can end in tragedy even in the most reputable families.

Characters of The House of Bernarda Alba

Bernarda Alba: a strong and authoritarian 60-year-old woman. She is conservative, traditional and greedy. Her maxim is to keep up her good looks, as she fears ruining her reputation. She is feared by all her daughters except Adela. She uses her cane to show authority.

Adela: youngest daughter, 20 years old. She is the only one who dares to challenge the authority of her mother. She is rebellious, vital and beautiful, and she pursues her wishes to the last consequences, without caring about her reputation. She is in love with Pepe el Romano, her sister’s fiance Angustias de ella.

Martyrdom: 24-year-old daughter. She suffers from an illness from which she has no hope of being cured. In addition, she considers herself weak and ugly and feels a lot of hatred and envy for her sister Adela, which is why Poncia calls her a poison well. She is secretly in love with Pepe el Romano, and she knows that Adela has a secret relationship with him.

Amelia: daughter, 27 years old. She doesn’t know anything about what happens or doesn’t happen between Pepe and his sisters because she doesn’t like to meddle in other people’s affairs. She considers it a punishment to have been born a woman due to the social limitations that this entails.

Magdalena: daughter, 30 years old. She is the only one who cries at her father’s funeral. She is resigned to her single status, as well as despising her womanhood. She lives anchored in nostalgia, since she romanticizes past times believing that they were happier. She believes that the society in which she lives is doomed to decline out of concern for what they will say. She is outraged by the wedding between Pepe and his sister Angustias, since she knows that Pepe only marries for economic convenience.

Angustias: eldest daughter, 39 years old. She is the daughter of Bernarda’s first husband, unlike her sisters. In addition, after the death of Bernarda’s second husband, he kept a large part of her inheritance, which, according to her sisters, attracts Pepe el Romano’s interest in her, and not that she is beautiful or interesting. She does not believe that this is true, but she is not convinced by her commitment because she believes that Pepe is absent with her and hides things from her.