What is ant? How do ants look like? What is the anatomy, body structure, parts of ants? Information on ants.

Ants have been living on the earth for more than 100 million years. During this span many other kinds of animals came into existence and then lost out in the struggle for survival. Man became the world’s master, making vast changes in its natural state. But in spite of keen competition for survival and changing living conditions, ants have continued to thrive. Today they are found everywhere—from the Arctic to the tropics, from damp forests to deserts, from seashore to the timberline of mountains, from under city pavements to the pantries of suburban kitchens.

Ants have an elaborate social structure, and they enjoy a longevity far greater than that of most insects. Queen ants have lived in captivity for as long as 20 years; workers, for nearly 10 years. The thousands of ant species that have been described by scientists far exceed the total number of all other existing social insects combined, and the number of individual ants is greater than the total number of all other terrestrial animals. 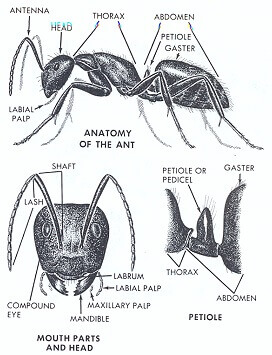 An ant’s small body does not suggest great durability. However, it is encased in chitin, a tough, rigid substance, forming an “outside skeleton.” Its body has three distinct parts: head, thorax, and abdomen.

The head contains a brain, which is sometimes no more than a fraction of a millimeter in size, and supports long, flexible antennae. The antennae are so efficient as sense organs that eyes are not of great importance. In certain species the workers either are blind or have only enough sight to distinguish light from darkness. Other species, however, have two well-developed compound eyes (each visual unit has its own lens), with three simple eyes (there is only one lens for all the sensory cells) between.

The mouth is composed of two sets of jaws, and each can open and close independently of the other. The outer jaws are the mandibles and are used for excavating soil or wood, for cutting up food, for carving, and for fighting. The inner jaws bear rows of bristles, which serve in cleaning legs and antennae. The tongue is a small pad covered with fine ridges. Three pairs of jointed legs are attached to the thorax, as are the wings of queens and males during the flight season.

Like other insects, ants do not have lungs but take in oxygen through small breathing tubes called tracheal tubes, which branch throughout the body. Colorless blood fills the body cavity, and in most species it is kept circulating by small hollow tubes that contract in waves from one end to the other. The ant has two stomachs, a true stomach and a “social” stomach, or crop. Food, in liquid form, goes into the social crop first. The food can be regurgitated from it to feed other ants. Connecting the crop and the true stomach is a “pumping” stomach. Its action helps to draw food into the crop and also makes some food pass from the crop into the true stomach, where digestion takes place. 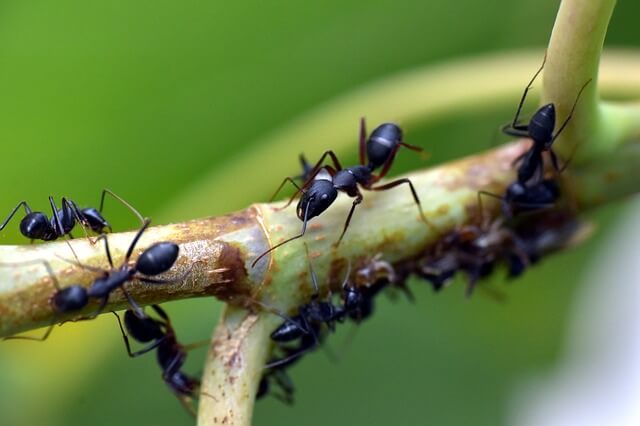 Not all ants have stings, but in the species that do, the weapon is the ovipositor (the egg-laying organ), which is located at the end of the abdomen, and through it poison is discharged from muscular sacs. Only females are able to sting. Some ants inflict severe bites with their jaws and inject poison into the bite. Others eject a spray of formic acid at their victims.