What are the rules, history, equipments, techniques of table tennis? Information about table tennis.

TABLE TENNIS is an indoor game for two or four players, who use a small wooden racket to hit a hollow celluloid ball over a net stretched across a table. When two persons play, the game is called singles. When four play, with two on each side, the version is known as doubles. Played throughout the world by persons of varying skills and ages, table tennis is also a highly competitive international sport. 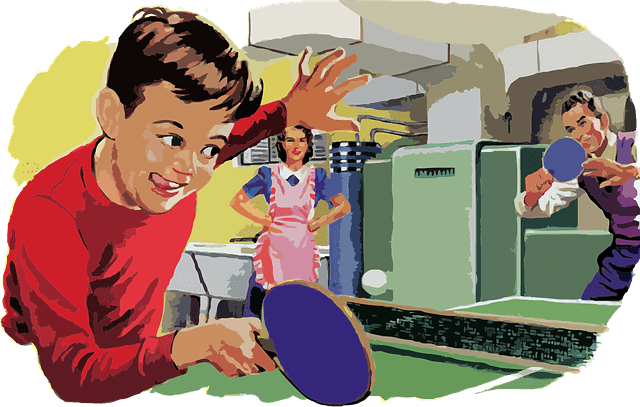 Under the trademark Ping-Pong the game became a parlor craze in Europe and the United States early in the 20th century. After World War I, with its name changed to table tennis and equipment standardized, the game became international. The Middle Europeans were dominant until 1952 when, at the Bombay World Championships, the Japanese took the lead. In 1959 at Dortmund, West Germany, China took the men’s singles title and remained dominant for eight years. In 1967, with internal turmoil disrupting China, Japanese players regained ascendancy.

The International Table Tennis Federation (ITTF) was founded in 1926 by seven European countries—Germany, Austria, Hungary, England, Wales, Sweden, and Czech Republic. From 1927 to 1957 the ITTF held annual championships in men’s and women’s singles and doubles, and in mixed doubles. Since 1957 championships have been held biennially. Emblematic of world team supremacy since 1927 is the Swaythling Cup for men and, since 1934, the Marcel Corbillon Cup for women. By the 1970’s the ITTF had a membership of nearly 100 nations, having become one of the largest sports federations in the world. The American affiliate is the U. S. Table Tennis Association, organized in 1933.

The playing area is a rectangular table 9 feet (2.74 meters) long and 5 feet (1.5 meters) wide. The playing surface is 2 feet 6 inches (76.2 cm) from the ground. The surface is edged with 3/4-inch (1.9 cm) white end and side lines. A white line the length of the tablet divides it into four sections, or courts. These are used only in doubles. A 6-foot long (2-meter) and 6-inch high (15.24 cm) net across the center, parallel to the end lines, divides the table in half.

The racket must be of wood and may be of any weight, size, or shape. Pimpled rubber or a layer of cellular rubber surfaced by pimpled rubber may cover the blade. The white ball is about 1 1/2 inches (37.2 mm) in diameter and weighs about 1/10 ounce (2.40 grams).

To begin, the server, determined by toss, stands behind the end of the table and hits the ball after projecting it upward from the open palm of the free hand. The ball must strike first the server’s court and then, passing over the net, strike the receiver’s court. The receiver returns the ball directly into the service court. Thereafter, server and receiver alternately endeavor to make a good return. When one fails to do so, the opponent scores a point. Volleying, that is, striking the ball before it bounces once, is not permitted. Service alternates after each 5 points. A serve that touches the net and drops on the receiver’s court is a “let” and does not count. 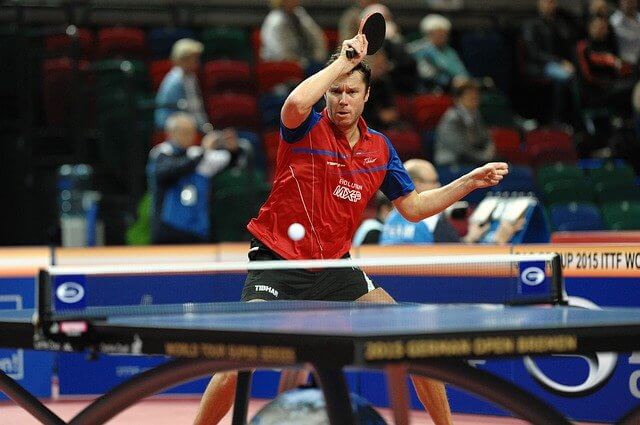 A game is won by the first player or team with 21 points. If both reach 20 points, play continues with service alternating after each point until one side gains a 2-point margin. A match is the best of three or of five games.

There are two basic grips: the “shakehands” and the Asian “penholder” grip. By far the greatest number of players use the shakehands grip. In this grip the player holds the racket so that the blade rests in the “Y” formed by the thumb and forefinger, the thumb resting on the front side of the blade and the forefinger along the back. Thus both sides of thl racket can be used. In the penholder grip, the racket is held between the thumb and forefinger like a pen, the blade downward and the remaining fingers spread against the back. Only one side of the racket can thus be used.

The basic strokes are the half volley, block, forehand and backhand drives, and forehand and backhand chops. Control of the ball at any speed is accomplished by imparting spin to the ball. With top spin, or overspin, the ball rotates toward the opponent and shoots forward on bounce. With underspin, or chop, the ball rotates away from the opponent and checks on bounce. As each shot is played, the player turns to face the ball, using short shuffling steps forward or backward to bring the ball within striking distance.

In the half volley, the player meets the ball at the height of its bounce with a forward and downward movement of the racket and, with underspin, literally pushes the ball across the net. He accomplishes a block shot by angling the face of the racket directly in the path of the ball just after its bounce. This counteracts the speed and spin of the opponent’s ball. 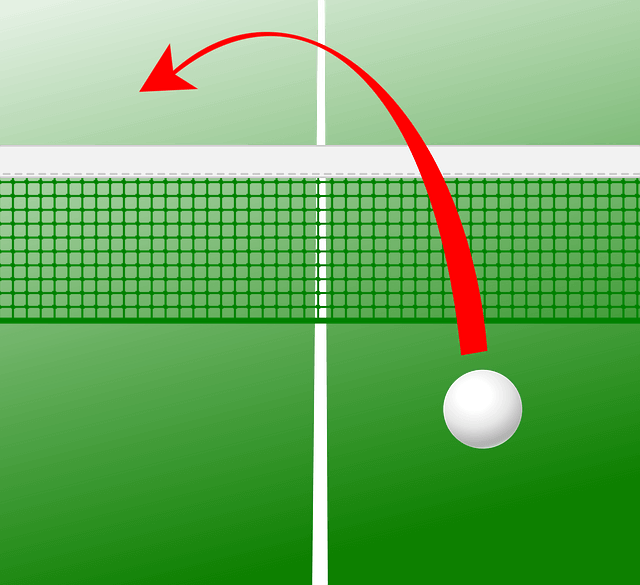 The forehand and backhand drives are fundamental attacking strokes. They are played with a forward and upward movement of the racket as top spin is imparted. The player moves his weight forward at impact. Chop shots are used in defense, the racket moving forward and downward, imparting underspin. The ball is played late, after it has lost much of its speed.