Streptomyces is a genus of filamentous bacteria found in many places. They are innocuous bacteria, which in very rare cases are related to pathologies.

One of the most distinctive characteristics of this type of bacteria is that they have a secondary metabolism, through which they can synthesize various substances that have been very beneficial in the field of medicine. Among these are numerous antibiotics, some antifungals and herbicides.

Within this genus, there are more than 500 species, many of them unknown. Due to this, numerous studies and investigations are carried out to determine their properties.

Its life cycle is a rather complex process, involving profound changes that culminate in the production of secondary metabolites and the formation of spores. These are found in the soil and when the suitable conditions are given they germinate, generating a germinative tube, from which the hyphae that penetrate the substrate to extract the nutrients are born.

In the field of biotechnology, studies have been carried out with streptomyces to generate human recombinant proteins. These investigations have shown that these bacteria have fewer drawbacks than Escherichia coli, which is what has traditionally been used for this purpose. 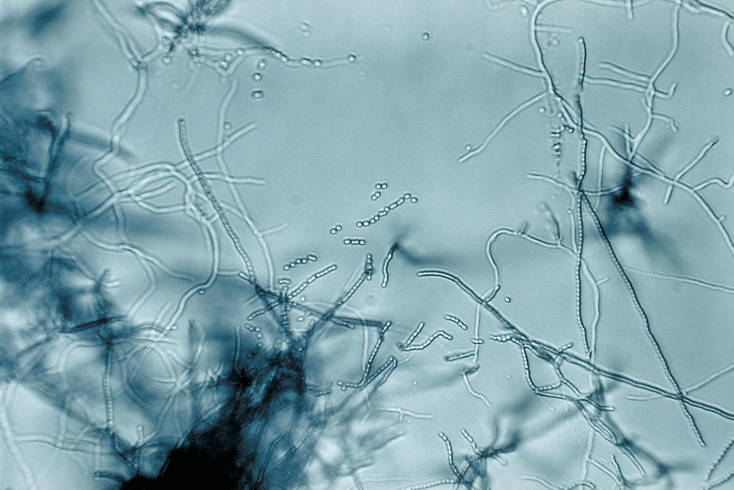 The taxonomic classification of the genus Streptomyces is as follows:

The bacteria of the genus Streptomyces are characterized by having an elongated and filamentous shape. They produce very well developed hyphae that have an approximate diameter of 0.5 – 2 microns. These hyphae form a framework mycelium substrate that contributes to eliminate organic compounds. These bacteria are characterized by producing spores. The surface of these is varied. They are hairy, smooth, rough, thorny or warty.

The genome of Streptomyces bacteria is quite peculiar. While all bacteria have a circular chromosome, they have a linear chromosome. Streptomyces coelicolor is the bacteria with the longest genome sequenced so far, with a total of 7,825 genes. Likewise, in its genome a large percentage of guanine and cytosine nucleotides is observed.

Likewise, they present linear or circular plasmids. There are even some that can be integrated into the bacterial chromosome. Its cell wall is type I. It does not contain mycolic acids or polysaccharides. In contrast to this, it has diaminopimelic acid and glycine.

In the cultures colonies with dusty aspect are appraised. Frequently they excrete color pigments, being able to appreciate grayish white, orange, black and brown, among others.

They are Gram positive
Bacteria belonging to the genus Streptomyces adopt a characteristic violet color when subjected to the Gram stain method. This is due to the presence of peptidoglycan in its cell wall, which retains the dye particles.

They are strict aerobics
These bacteria use oxygen as the main element to carry out the different metabolic processes from which they obtain energy. Because of this, the bacteria must develop in an environment with great availability of this element.

They are catalase positive
Bacteria of this genus synthesize the catalase enzyme. This enzyme is important because it allows the cleavage of hydrogen peroxide (H2O2) in oxygen and water.

When it occurs, one of the characteristic signs is the release of bubbles, which indicates that oxygen has been produced in the form of gas.

They are chemoorganotrophic
This means that your metabolism is based on oxidation reduction reactions, which are carried out in order that the cell can obtain the necessary energy.

They are slow growing
When a culture of Streptomyces is carried out, they grow slowly, in a period of approximately 2 to 10 days.

Growth conditions
The Streptomyces are mesophilic bacteria, with a suitable temperature of growth that is located in a range of between 25 and 35 ° C. The optimum growth temperature is 30 ° C.

With regard to pH conditions, these bacteria grow optimally at a pH ranging from 6.5 to 8. Despite this, species have been found that manage to grow at an acidic pH or at an alkaline pH of up to 9 or plus.

Habitat
They are widely distributed throughout the planet, in a multitude of environments. They are mainly in the soil, constituting 80% of the actinomycetes found in the soil.

Culture
The most suitable carbon source to establish a culture of Streptomyces is glucose. According to the characteristics of these bacteria and taking into account the published studies, the recommended culture media are: Glucosado Sabourad and Benett, among others.

Culture medium Glucose Sabouraud
It is the most used culture medium with fungi and with certain filamentous bacteria such as Streptomyces. As a carbon source, glucose is used and peptone is used as a nitrogen source.

It also contains agar, chloramphenicol and triptein. The pH should be maintained between 5.5 and 6.

Benett culture medium
This medium is also widely used to grow Streptomyces. The source of carbon is glucose, while the source of nitrogen is the extract of meat or yeast.

Its components also include casein and agar. The ideal pH for this culture medium is 7.3.

Among the antibiotics that produce the various Streptomyces species are:

Streptomyces bacteria are generally not pathogenic to humans. However, in certain conditions of depression of the immune system, they can cause pathologies such as mycetomas, peritonitis, chronic pericarditis, septicemia, panniculitis, cervical lymphadenitis and endocarditis, among others.

The bacteria can enter the body through injuries or skin wounds. From there it can pass into the bloodstream and move to various organs in which it can cause havoc. If it does not enter the bloodstream, it remains in the layers of the skin, generating lesions, of which, the most common are mycetomas.