Rules And History Of Golf

What is golf? What are the rules of golf sport? History of golf and information about golf sport.

A golf course usually consists of either 18 or 9 hole s, which vary in length from ıoo to 600 yards. An 18-hole course measures between 5 ooo and 7,000 yards. The player starts each hole from a small, flat mown surface (the tee), where he is allowed to place his ball on a small peg, also called a tee, in order to raise it an inch or so from the ground. Nowhere else on the course may the player move or touch his ball before striking it. From the tee the player tries to hit the ball on to a stretch of mown grass (the fairway) which leads towards a specially prepared smaller area of smooth turf (the green). In the middle of the green is a hole, 4 1/4 inches in diameter, which is marked by a flag on a stick.

Those parts of the course off the fairway may consist of thicker grass (rough), heather, gorse, trees, scrub or even water. Artificial hazards in the form of hollows filled with sand (bunkers) are also placed about the course to catch bad shots. At the seaside sandhills often make natural bunkers. The object of the game is to hit the ball from the tee into the hole in the smallest number of strokes. 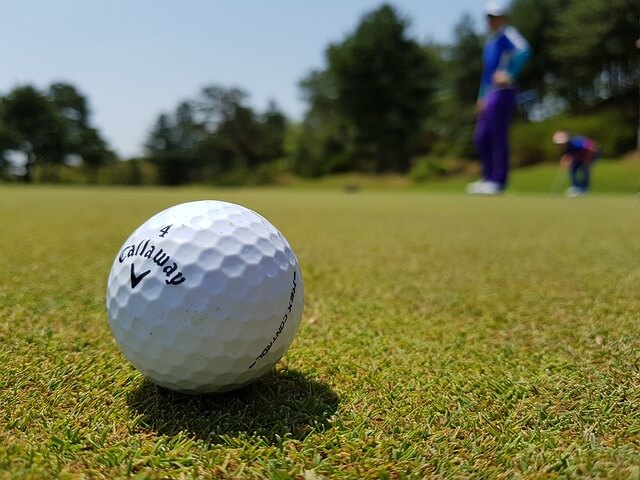 The player is allowed a maximum of 14 clubs, although 4 or 5 are enough for a beginner. In a full set there can be four clubs with wooden heads (woods) and these are used for the longest shots. They are driver (used from the tee), brassie. spoon and number 4 wood. A good drive will send the ball 230-250 yards. The irons are numbered 1 to 9 according to the slope of the blade. The number one iron has an up-right blade and is the most powerful; the nine-iron blade is set back the farthest. The high-numbered irons are used for gaining height rather than distance; that is, for playing out of bunkers, from rough or over obstacles, and for pitching on the green. The club used on the green is a putter and these strokes are putts. The ball is made of rubber and has a hard cover of gutta percha.

Every hole has a bogey (or Standard scratch score). According to the length of the hole, bogey may be 3, 4 or 5 and is the score a good golfer would take. A player who goes round in bogey is a scratch golf er, one who goes round in two over bogey is a two-handicap golfer, ten over, a ten-handicap and so on. The handicap limit for men is 24; for women 36. The handicap system makes it possible for players to be fairly matched. In singles the higher handicap player receives three-quarters of the difference. Thus if a 16-handicap plays a scratch man he will get 12 strokes. In foursomes the allowance is three-eighths of the difference.

Scoring may be done either by medal play, in which the player who takes fewest strokes for the round of 18 holes is the winner ; or by match play, in which the winner is the player who wins most holes during the round. In match play, if both players take the same number of strokes for a hole, that hole is halved. When a player has won two holes more than his opponent, he is said to be “two up” and his opponent “two down”. When a player leads his opponent by more holes than the number still to be played, he wins the game. For example, if he is five up with only four holes to go, he wins by that margin. If the players are “all square”, or even, at the end of 18 holes, the winner of the first extra hole wins the match.

Golf can be played in singles as a match between two people or in foursomes between two pairs, the members of each pair taking turns at hitting their ball. A four-ball match is also played between pairs, but each man plays his own ball and the best score by either partner is counted.

There are two kinds of golfers, professionals and amateurs. Professionals play in tournaments for prize money, teach the game and sell equipment, clubs and balls. Amateurs play golf for recreation and exercise. 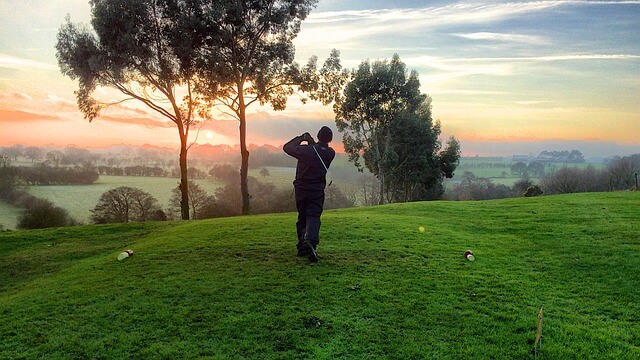 No one knows quite when or where golf started, though it may have begun in the Netherlands. It became popular in Scotland and many Scots look on it as their national game. In 1457 the Scottish parliament forbade it because they said it was interfering with practising with bows and arrows. It was taken to the United States at the end of the ı9th century and is now played there even more than in Great Britain. Most American courses, however, are inland ones, and the famous links, or seaside courses, of Britain with their short springy turf and natural bunkers are thought the finest in the world. The most famous is the Old Course at St. Andrews in Fife, Scotland. This is a public course where anyone may play, but behind the first tee stands the clubhouse—of the Royal and Ancient Club, the ruling body of golf in Great Britain. In many towns of England and nearly all Scottish towns there are public golf courses where people can play without the expense of belonging to a club.

Golf is popular because people can play it long after they have had to give up other games and because it can be played all the year round in most parts of the world. In 1597 the companions of the Dutch explorer William Barents played golf at Novaya Zemlya in the Arctic.

There are many great golf tournaments and matches. The most important events are the British and American Open Championships, in which professionals and amateurs from all countries may play, and the Amateur Chain, pionships in which only amateurs may take part. Matches between Great Britain and the United States are played for the Walker Cup by amateurs, the Ryder Cup by professionals and the Curtis Cup by women.