Robinson Jeffers; (1887-1962), American poet, who, at his best, produced a few hauntingly lovely poems by listening for the silence of a dead and meaningless cosmos. He was the only uncompromising philosophical materialist among the American poets of his generation. 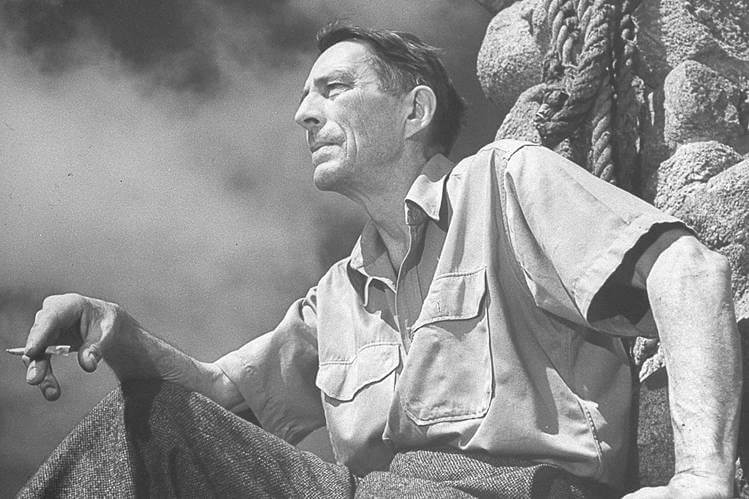 John Robinson Jeffers was bom on Jan. 10, 1887, in Pittsburgh, Pa. After graduating in 1905 from Occidental College in Los Angeles, he studied medicine for a time. In 1913 he married and settled in Carmel, Calif., then unspoiled open country, where he built, partly with his own hands, a stone house on a cliff overlooking the Pacific Ocean. Here he lived until his death, on Jan. 10, 1962, producing an occasional volume of poetry and brooding on the tragedy of existence.

The poems of Jeffers’ first two volumes, Flagons and Apples (1912) and Californians (1916), are traditional in both form and subject. Tamar and Other Poems (1924) first states his characteristic themes, the results of his pondering on the antihumanistic and antireligious implications of his postgraduate scientific studies.

Thereafter, Jeffers wrote only in free verse, using a long, somewhat Whitmanic line that generally lacked Whitman’s sonic effects and relied primarily on plain statement and rhetoric. He found beauty and reality only in the subhuman or the inanimate. Life seemed a “disease of matter” or a tragic “accident.” Dear Judas and Other Poems (1929) retells the Passion story with Judas as hero and Christ as traitor because he preached love, the “trap” that prevents man from welcoming annihilation.

The Double Axe and Other Poems (1948) offended many readers with its Spenglerian comments on World War II, and a shift in public sensibility made the poet’s naturalistic materialism, which he named “Inhumanism,” increasingly unappealing. Jeffers’ last major public success came with his adaptation of Euripides’ Medea (1946), which was widely read and was produced on Broadway in 1947.