Robert Clive; (1725-1774), British soldier, administrator, and pioneer of empire. Clive was born on Sept. 29, 1725, near Market Drayton, Shropshire. The son of a lawyer and small landholder, he was appointed a writer in the East India Company’s service at the age of 18 and was sent to Madras, India, arriving in 1744.

Clive saw in the outbreak of hostilities between the British and French in southern India during the War of the Austrian Succession a chance to demonstrate his abilities as a man of action. He was taken prisoner when Madras- fell to the French in 1746, but escaped to Fort St. David. He was promoted to the rank of ensign in 1747. The peace of Aix-la-Chapelle ended the war in Europe but not the rivalry between the British and French East India companies. Two phases of the contest were significant to the future balance of power in India, and Clive was active in both. The first phase was European involvement in the internal power struggles of India, and the second was European use of small numbers of well-trained troops to gain allies, influence, and power. 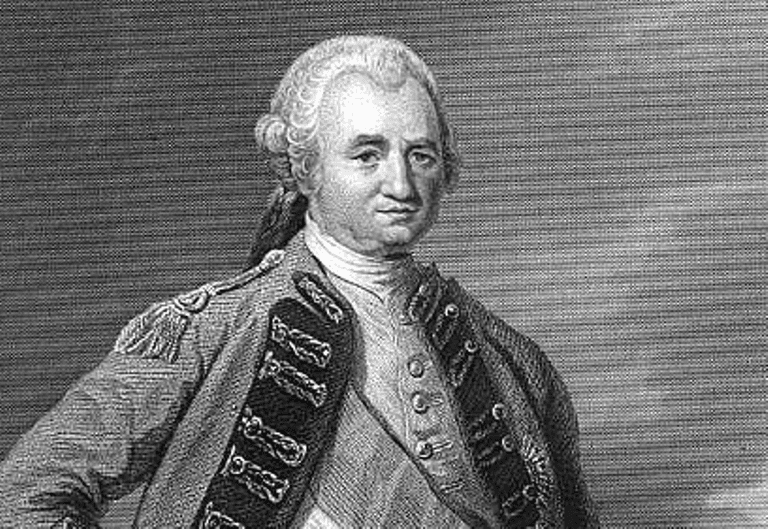 In 1751 when the French position was at its strongest in the south, Clive led a diversionary expedition against Arcot, capital of the Carnatic, in order to relieve the British in Trichinopoly. For 53 days Clive, with a force of 500, held Arcot. In June 1752 he relieved Trichinopoly, accepted the surrender of the French, and installed a British puppet as ruler of the Carnatic.

Following a 3-year interval in England, Clive came again to Madras, now as a Lieutenant Colonel in the Royal Army. He served briefly as deputy governor of Fort St. David and then in 1756 was called on to retrieve the British position in Bengal. There, Sirajud-daullah, the new nawab, had captured the British factory (trading station) at Kassimbazar and marched on Calcutta, which fell on June 16. Clive set out from the south on October 16 with 2,400 troops, five men-of-war, and five transports. The city was recovered on Jan. 2, 1757.

Sirajuddaullah restored and extended the company’s privileges, but Clive, seeing that the nawab was surrounded by disaffected officers and nobles, determined to take advantage of this dissension, and sponsored a new ruler to ensure the company’s position. An agreement was reached with the elderly general Mir’Jafar whereby vast compensations would be paid for the loss of Calcutta, including large considerations to the chief officers of the company. At Plassey, on June 23, 1757, Clive, with an army of 800 Europeans and 2,200 Indians, faced the nawab’s 80,000 disorganized and treasonous troops.

Mir Jafar withheld his men and cavalry and Sirajuddaullah quickly fled. The battle was no more than a skirmish and the outcome was scarcely in doubt. On June 28, 1757, the British puppet was placed on the throne, beginning an era of public and private corruption. Clive himself took £234,000 ($1,170,000) and an estate worth £30,000 ($150,000) a year. Vast personal fortunes were made in this period, and the injustice of this Clive recognized, although he had himself started this moral collapse.

The Greatest Nabob. After his first term as governor of Fort William (Calcutta), Clive left India in February 1760 and returned to England a man of wealth and fortune. He purchased a controlling interest in the company and a seat in Commons from Shrewsbury. In 1762 he was given an Irish peerage as Baron Clive of Plassey and in 1764 was made a Knight of the Bath.

The Second Governorship and Reform.

In 1764, Clive returned again to Bengal and on May 3, 1765, began his second governorship. He undertook the immense task of controlling chaos and corruption and did so with characteristic vigor. The Battle of Buxar (Baksar or Baxar) in 1764 had confirmed the British position in Bengal. In the settlement following Buxar the company was granted the diwani, or revenue collecting rights, for all of Bengal, while the nawab, in theory, remained in control of the enforcement of law and order. In fact, the administration of Bengal was in the control of the company and its Indian agents.

Clive’s most difficult task was his effort to control peculation. Immediately on his arrival, he struck out at corruption by demanding resignations, cutting swollen allowances, crushing the “White Mutiny” of discontented officers, limiting the size of gifts that could be accepted, and regulating private trade. Financial reform was far from complete; but it was Clive’s achievement to have initiated reform.

Clive retired from the governorship in February 1767 and left for England. In 1772 when the company was threatened with bankruptcy Clive was charged with corruption during his first governorship. Defending himself before Parliament, he declared, “I stand astonished at my moderation.” In 1773, Parliament passed a unanimous resolution which found Clive “to have rendered great and meritorious service to his country.” Both censure and recognition were perhaps warranted. Nevertheless, in the acquisition of Bengal, Clive’s leadership created the basis of a vast colonial empire.