Who is Pythagoras? Information about the studies and theorem of Pythagoras, the great mathematician of antiquity.

Greek mathematician and philosopher (Samos, Greece, 570? BC – Metaponto, Italy, 480? BC). Towards the year 532 a. He traveled to Magna Graecia, where he founded the “Pythagorean order” in Crotona, which had a great influence in southern Italy and in Greece. 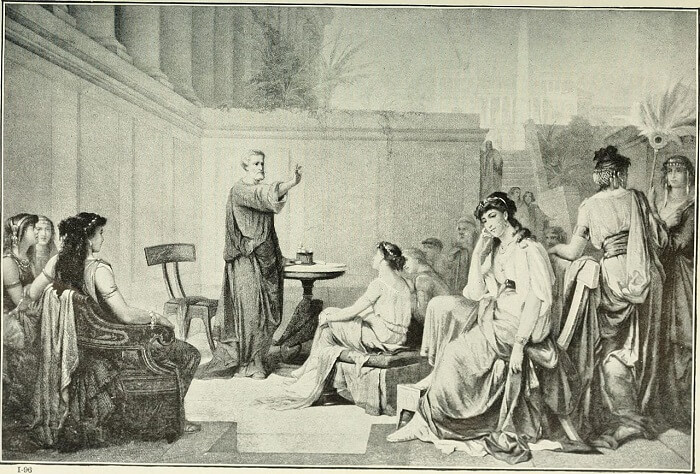 Illustration from 1913 showing Pythagoras teaching a class of women. Many prominent members of his school were women and some modern scholars think that he may have believed that women should be taught philosophy as well as men. (Source : wikipedia.org)

Later, around the year 496 a. C., he had to flee from the tyranny of Polycrates and went into exile in Metaponto.

The members of the Pythagorean school formed a scientific, philosophical, political and religious group and were interested in the study of various subjects such as mathematics, philosophy, music, astronomy and medicine. The Pythagoreans distinguished perfectly between logistics, or the study of calculus, and arithmetic, which was what interested them most from the beginning, and which dealt with the abstract properties of numbers. They were based mainly on the study of whole numbers, represented with sets of points and identifying them with discrete sets of units. Said numbers, according to the corresponding geometric shape, were classified into triangular, square, pentagonal, hexagonal, etc., that is, the shape of the numbers reported their properties.

The Pythagorean school was also interested in studying other types of more concrete numbers, such as friendly numbers (two natural numbers are friendly if each of them is the sum of the strict divisors of the other), perfect numbers (a number is perfect when the sum of their strict divisors is equal to the same number), abundant and deficient numbers, and they also studied the difference between prime and composite numbers, and the theory of proportion, and introduced ten means between two numbers. 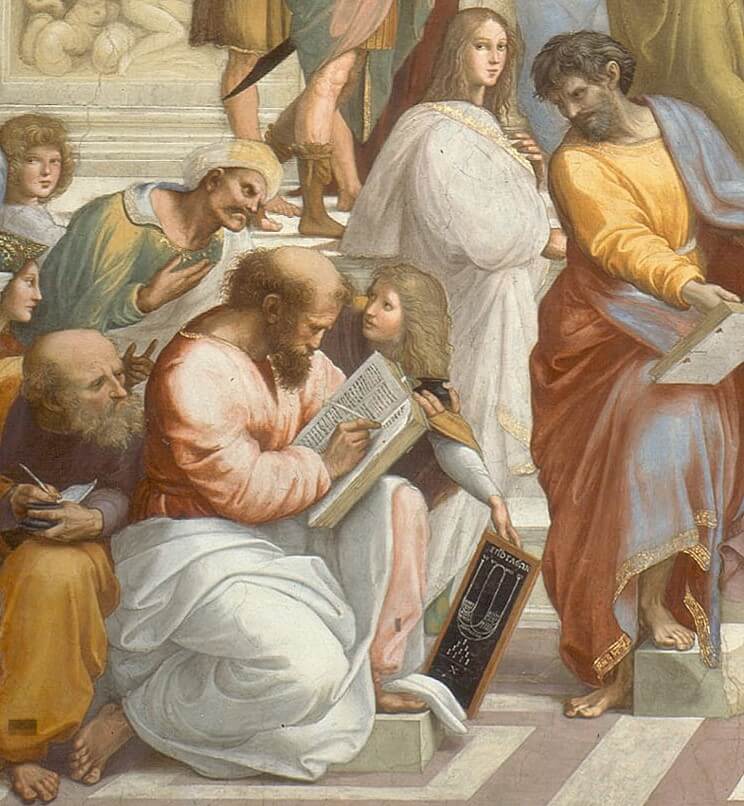 In Raphael’s fresco The School of Athens, Pythagoras is shown writing in a book as a young man presents him with a tablet showing a diagrammatic representation of a lyre above a drawing of the sacred tetractys. (Source : wikipedia.org)

They are credited with the discovery of irrational numbers and also that of the incommensurability of the diagonal and the side of a square.

In geometry they studied above all concrete figures and particularly polygons and polyhedra, among which they are attributed the cube, the tetrahedron and the dodecahedron. In the first two books of Euclid’s Elements are included the most important ideas and discoveries of the Pythagoreans about the remarkable results of triangles, parallels, polygons and circles, and in particular the demonstration that the sum of the three Angles of any triangle is equal to two right angles, that is, 180 degrees.

Proclus attributed to Pythagoras the formula that allows the Pythagorean triplets to be formed. This formula was known to the Babylonians who applied it to their numerical calculations.

Of all the discoveries made by the Pythagorean school, the one that stands out the most is the Pythagorean Theorem. This theorem shows that the square of the hypotenuse of a right triangle is equal to the sum of the squares of the other two legs.