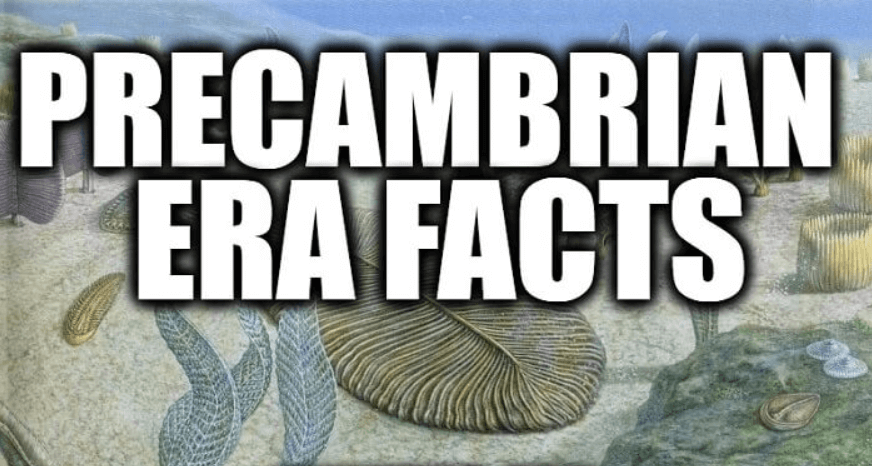 PreCambrian Era; The oldest rocks that contain fossils of distinct animals are known as the Cambrian rocks (from Cambria, the Latin word for Wales), and the fossils in them prove that such animals existed during the period that these rocks were being formed.

In many parts of the world, however, these Cambrian rocks rest on thick beds of rock that do not contain such fossils, which proves that they must be even older. They are therefore called the Pre-Cambrian rocks (“pre” means “before”). Traces of life from these earlier rocks are known and the oldest evidence of plant life may be as much as 2,000,000,000 years old.

Actually there are many different types of Pre-Cambrian rock, one above the other. The older and deeper, known as the Archaean rocks, have layers that are very twisted. They became twisted because one mass of rock pressed on another and forced it into a smaller space (thus, also, making it fold into mountains). Some younger rocks, known as Algonkian, are much less twisted and were formed from the worn-down mountain tops of the older Archaean. They show that the climate of 1,000,000,000 years ago must have been very like that of today, for there is evidence both of ice and of deserts. In parts of Shropshire (England) and round Lake Superior, in Canada, there is much volcanic material mixed with this type of rock, which proves that volcanoes were active in these areas.

The Pre-Cambrian rocks contain the greater part of the minerals that we use today. To give only a few examples, the gold of the Transvaal (South Africa), the copper, nickel and iron of the Sudbury area in eastern Canada and the silver, lead and zinc of New South Wales (Austraiia) are all found in Pre-Cambrian rocks.