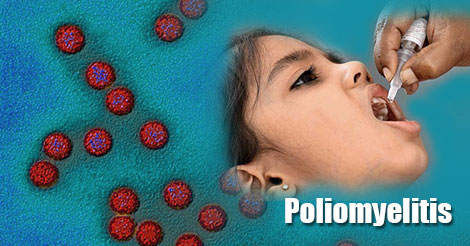 Poliomyelitis; In the summer and early fall, when most epidemics of Poliomyelitis occur. It begins, like many other infections, with a general sick feeling, fever, and headache. There may be vomiting, constipation, or a little diarrhea. But even if your child has all these symptoms and pains in his legs in addition it’s a mistake to jump to conclusions. The chances are still great that it’s just grippe or a throat infection. Of course, you will be getting a doctor, anyway. If it is a long time before he comes, you can reassure yourself this way: if the child can put his head between his knees or bend his neck, forward so that his chin touches his chest, he probably hasn’t got it. (Even if he can’t do these tests, it doesn’t prove that he has the disease.)

Doctors suspect that chilling and exhaustion make a person more susceptible to the disease, but it’s sensible to avoid these at any time. Of course, the commonest cause of chilling in summer is staying in the water too long. A child should be called out when he begins to lose color-before his teeth chatter.

The Salk vaccine, which is made from the polio virus, is of great value in building a child’ s resistance to the paralytic form of the disease. It stimulates his body to develop its own protection, but this takes a number of weeks to accomplish. The vaccine can’t help in a hurry if he has already been esposed. On the other hand, gamma globulin (which is made from the blood of adults who have some protection) can provide a partial protection for a few weeks. It doesn’t last because the child didn’t build it himself.

There is no cure for polio. The focus of modern treatment has been on providing relief of symptoms, speeding recovery and preventing complications. Supportive measures include antibiotics to prevent infections in weakened muscles, analgesics for pain, moderate exercise and a nutritious diet. Treatment of polio often requires long-term rehabilitation, including occupational therapy, physical therapy, braces, corrective shoes and, in some cases, orthopedic surgery.