Daunou opposed the execution of Louis XVI and advocated his deportation. He was imprisoned for his opposition to the proscription of the moderate Girondists and escaped the guillotine only when Robespierre was deposed in 1794. A member of the Council of Five Hundred, Daunou was the chief author of the constitution of 1795. His independent spirit clashed with Napoleon’s authoritarianism, and Daunou left the government in 1802. He twice returned to die Chamber of Deputies after Napoleon’s downfall. 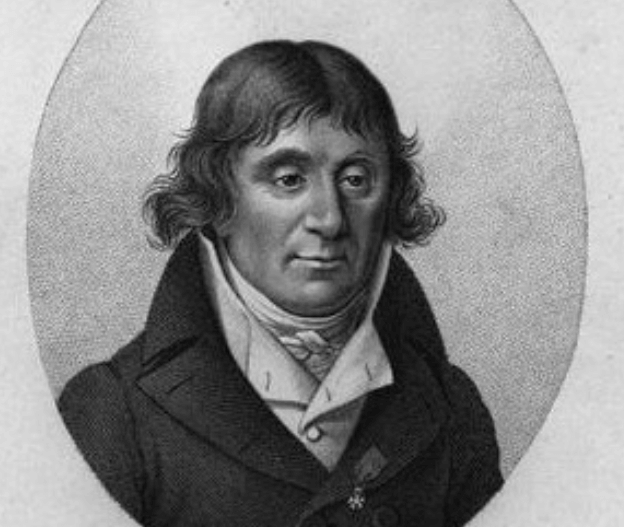 During the French Revolution , he embraced the new ideas, and having taken the side of the Civil Constitution of the Clergy, he became Vicar General of the Constitutional Bishop of the Pas-de-Calais (1791). On September 9, 1792, the department invited him to participate in the Convention, where he distinguished himself by his moderation. Opposed to the appearance of Louis XVI, he published Considerations on the trial of Louis XVI, and by his own moderation, he voted, on January 20, 1793, for imprisonment until peace returned, followed by the deportation of the king. He outlined an extensive program of public education and introduced a point of order at the work of drafting the constitution (April 1793). His protest against the arrest of the Girondins led to his imprisonment-with 72 other conventionalists-on October 3, 1793. He was released from prison on October 24, 1794, after Thermid 9 (revolutionary calendar). Once free, he took his place in the Thermidorian convention, where he was one of the eleven deputies responsible for drafting the Constitution of the year III (1795). He presented a report “on ways to give more intensity to the government”, defended the report on the electoral law, in public education and the organization of the Institute of France.

The law of 3 Brumaire of year IV of public education is called the Daunou law. Secretary of the Convention the first Nivose of the year III (December 21, 1794), president of the Assembly on November 18 of the year III (August 5, 1795), was appointed a member of the Institute on February 29 of the year IV ( November 20, 1795) and entered the Council of Five Hundred on the 23rd of Grape Harvest (October 14, 1796), of which he was appointed secretary on the 1 Germinal Year V (March 21, 1797) and president on the 3rd of Fructidor Year VI (August 20, 1798) after being re-elected for the department of Pas-de-Calais, on July 23 year VI (April 12, 1798). He was in charge of the questions of public education, of the organization of the Supreme Court, of the repression of press crimes, of the electoral law, etc. He was sent on a mission to Rome in 1798 after the assassination of General Duphot where he drafted the Constitution of the Roman Republic. At the same time, he was appointed director of the Sainte-Geneviève Library.

Under consulate and empire

He entered France at the time of the coup d’état on February 18, collaborated and was part of the provisional committee of the legislature on February 19 of the year VIII (November 10, 1799) and contributed to the drafting of the Constitution of the year VIII . He published, at Bonaparte’s request, a historical essay on the temporal power of the Popes (1799).

Called to the Council of State on April 3, Year VIII (December 24, 1799), he refused this entry and the next day went to court, of which he became president. His attitude was judged to be too pro-independence, his speeches against the excessive authority of the prefects and the organization of special courts, is understood as the “ideology” in the first phase from 1802.

He refused again to the Council of State, and the direction of public instruction, and only accepted the functions of archivist of the legislative body on March 24 XIII (December 15, 1804) to replace Camus and Knight Cross of the Legion of honor (1810).

Too independent-minded to care about politics any longer, he devoted himself to organizing libraries and archives, and in 1804 became Keeper General of the Empire Archives and Imperial Censor in 1810.

Under the July monarchy

After the Three Glorious Ones, the July monarchy in 1830 gave him his duties as the General Archive of the Guard which he held until his death in 1840 and where he left a mark in such a way that today he speaks of “Daunou’s chair” to refer to the Archives Director position.

Following his appointment to the Archives, Daunou had obtained confirmation from his electors of his term as deputy on October 21, 1830, and obtained renewal on July 5, 1831. He served until the 1834 elections and presented himself to the Chamber of Deputies several reports, among others on primary education (December 1831).

A member of the Academy of Moral and Political Sciences at its reorganization in 1832, he became perpetual secretary of the Academy of Inscriptions and Fine Letters (1838) and was raised to the dignity of France (November 7, 1839) long before his death.