Definition of muscle. What are the types and functions of muscles? Information about the physiology and anatomy of muscles.

Physiology and Anatomy Of Muscles

MUSCLES, the components of the muscular system, in vertebrates, that are primarily concerned with locomotion. There are three basic types of muscles in man: (1) smooth or non-striated muscle, which deals largely with involuntary action in internal organs; (2) striated or skeletal muscle, which governs willful motion in the extremities, head, and trunk; and (3) cardiac or heart muscle, which is adapted to the continuous, rhythmic beat of the heart. Smooth muscle is found in the walls of the blood vessels, particularly the arteries, and in the lining walls of the respiratory, intestinal, and genitourinary tracts.

Striated muscles are the red muscles which arise and insert at various strategic portions of the bony anatomy to assist in required locomotion. They are connected to bone by tendons or sinews together with fibrous sheets called ligaments. Heart muscle is endowed with its own system of continuous contraction, which is a sustained, involuntary motion. In 1939, C. L. (later Sir Charles) Evans estimated that the average human heart muscle contracts 2,600 million times in a lifetime and delivers 150,000 tons of blood from each of the two heart ventricles. 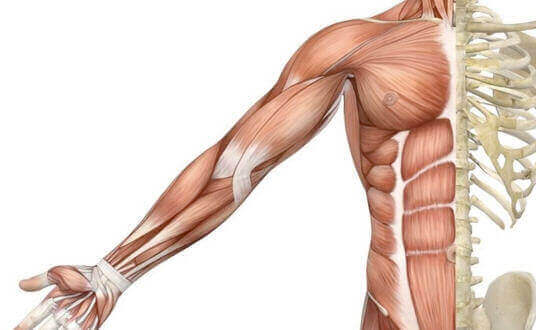 Enormous study has been devoted to the physiology of muscles. Myosin, the chief muscle protein, has been shown to have the ability to contract on proper stimulation even after being ground up in a tissue preparation. The origination of activity in the neuromuscular system requires a series of steps: excitation, conduction of this impulse, and response of the muscle.

This can be demonstrated simply by the reflex arc of the spinal cord.

If, for example, an area of the skin in the hand is burned, the stimulation is carried by the sensory system to the cord, which in turn sends a message to a motor nerve cell in the anterior horn. This cell promptly activates the proper muscle group in the area to remove the hand from the harmful stimulus. Among other physiological aspects of muscle is muscle metabolism, the ability of muscle to combine glycogen, its chief energy source, with the oxygen of hemoglobin and perform work. At times muscles also perform work anaerobically (without oxygen).

Muscles are endowed with a rich blood and nerve supply to accomplish their mission. The object is to induce a whole group of muscles or a bundle of muscle fibrils to contract synchronously and simultaneously. Striated muscle has been made to contract by electrical stimulation, the degree of contraction varying directly with the strength of the current. This is not true of smooth muscle and cardiac muscle, both of which contract maximally when a certain threshold stimulus is reached.

According to the so-called all-or-nothing law, the application of greater stimulation will not produce greater reaction in these groups. Once any muscle group or fiber contracts, there follows a lag period, known as the refractory period of muscle, in which no amount of stimulation will produce activity. A smoothly coordinated muscle performance is produced by the graded discharge of the motor neurons in the spinal cord ; otherwise, there would be a tremor or a jerk or complete tetany in muscle action. In England in 1930, J. C. Ercles and Sir Charles Scott Sherrington found, for example, that 430 motor nerve fibers leave the spinal cord to carry directions to the gastrocnemius (calf muscle) of a cat.

Microscopic study shows the unit of all muscles to be a single elongated or spindle-shaped cell with thin tapering ends and a thickened middle where the nucleus is located. Smooth muscle, the most primitive type, is found in the body in sheets of myofibrils that vary in size from 0.5 millimeter in the pregnant uterus to 15 or 20 microns in the smaller blood vessels. Microscopic strands of smooth muscle occur in the connective tissue of skin. Their action, either singly or in groups, is the reason for hair’s “standing on end” and for the appearance of goose flesh from cold. Histologic study of the wall of the intestinal tract shows that the smooth muscle there is functionally arranged to assist in peristalsis, with an outer longitudinal layer and an inner circular layer.

Skeletal muscle presents quite a different picture in teased preparations under the microscope. The units appear as long muscle fibrils with cross striations and vary in length from 10 to 100 microns or more, depending on the animal. Covering the individual units is the sarcolemma, a thin, transparent membrane that also encompasses the flat individual muscle nuclei. Surrounding the myofibrils of muscle is a cytoplasmic structure called sarcoplasm. Striated muscle is gathered together in primary, secondary, and tertiary bundles surrounded by fibrous connective tissue. Microdissection has demonstrated that a collagenous structure, called the perimysium, connects the muscle bundles with the tendon, which then usually attaches itself to the periosteum of bone.

Cardiac muscle deserves special mention because of its unusual properties.

The plan seems to be a network of striated muscle in which very few free endings may be discovered. This system is coordinated by a continuous sarcoplasmic network, called Purkinje fibers, which lies just below the endocardium. These fibers in turn communicate via Purkinje cells, which form the bundle of His, and the latter carries the impulse for the cardiac muscle beat. Any interference with this system may lead to heart block. In the atrioventricular conduction system, which is made up of the Purkinje fibers and the bundle of His, nature has devised a system in which all cardiac muscle fibers contract on signal in a rhythmic and automatic manner for the lifetime of the individual.

The gross anatomy of muscle shows that it connects itself to cartilage, ligaments, and skin as well as to bone. When all the muscle fibers lie on one side of a tendon like the plumes of a quill pen, the muscle is termed unipennate; when they converge on both sides of a tendon, it is bipennate. Muscles arranged in a circular manner at body orifices, such as the anus, are known as sphincters. The fixed point of muscle is commonly called the origin, while the structure point where it acts is named the insertion. The biceps muscle, for example, originates in the shoulder bones and inserts on the radius bone of the forearm, where it does its work of flexing the forearm on the upper arm. This is a lever-type muscle. Other muscles terminate in rather long tendons and have a pulleylike action.

Among them is the flexor digitorum profundus, which flexes the fingers of the hand. Another type of muscle is one which ends in a broad, flat, tendonlike structure called the aponeurosis. Such a muscle is the external oblique muscle (obliquus abdominis externus), which arises in the lateral aspect of the abdominal wall and inserts in the mid-line of the aponeurosis, known as the inscription tendon. The diaphragm, the great muscle which separates the abdominal from the chest contents and assists in respiration, has a structure peculiar to itself. Its aponeurosis is a central tendon divided into right, left, and middle leaflets. The muscular parts of the diaphragm are in the periphery.

Certain basic muscle groups in the human body are worthy of mention.

In the head the temporal muscle, the masseter, and the internal and external pterygoids make up the muscles of mastication. Together with many smaller muscle groups, the sternocleidomastoid muscle in front and the trapezius muscle (the diamond-shaped muscle between the neck and the shoulders) in back help to rotate the head on the trunk. Important muscles in the chest wall are the major and minor pectoral group, the serratus anterior and serratus posterior in the flanks, and the intercostals connecting the ribs. The anterior abdominal wall has three muscle layers lying laterally to the double-bellied rectus muscle in front: the external oblique, the transverse (transversus abdominis), and the internal oblique (obliquus abdominis internus).

The principal muscles of the back below the trapezius are the rhomboids (rhomboideus major and rhom-boideus minor) between the shoulder blades and the latissimus dorsi in the lateral aspects of the mid-back. The quadratus lumborum is the chief muscle of the lower back. The muscles of the extremities are generally divided into opposing muscle groups. The action of the biceps in flexing the forearm on the upper arm is opposed by the triceps, which extends the forearm. In a similar way, the largest muscle of the body, the quadriceps femoris, acts as the extensor of the upper leg, working against the biceps femoris in the back. In the lower leg the gastrocnemius extends the foot, and the anterior tibial muscle (tibialis anterior) flexes it.