Who was Peter Abelard? Information on Peter Abelard Biography, life story, Contributions to Philosophy and theology.

Peter Abelard; (1079-1142), French philosopher and theologian, who was a brilliant teacher and dialectician and a leading figure in Medieval Scholasticism. The French form of his name is Pierre Abélard or Abailard; the Latin form, Petrus Abaelardus. 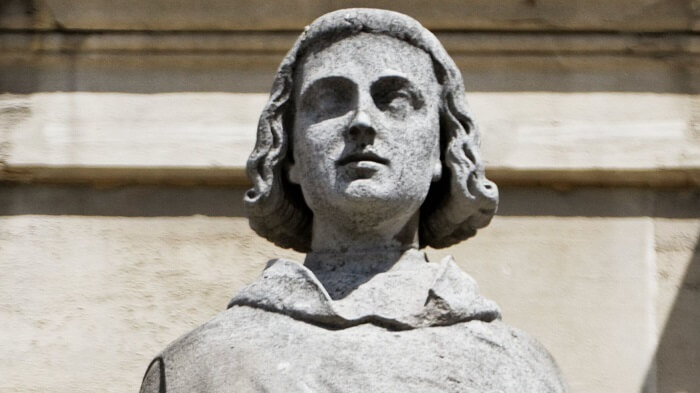 Abelard was born at Le Pallet, near Nantes, in northwestern France, the eldest son of the village lord. He studied logic at Loches, under Roscellinus, and at the Cathedral School in Paris under William of Champux. Dissatisfied with William’s teaching, Abelard established his own school, first in 1102 at Melun, next at Corbeil, and later at Paris, where lie engaged in a dispute with William, forcing the latter to change his views on the nature of universal ideas. Abelard then turned his attention to theology, attending the lectures of Anselm of Laon. However, his criticism of the renowned theologian led to his expulsion from Laon and his return to Paris.

Because of his growing reputation as a rhetorician and theologian, Abelard was granted an honorary canonship and offered the chair of philosophy and theology at Notre Dame Cathedral School in Paris. While this appointment marked the climax of his career, it | was also the beginning of his serious troubles— difficulties he describes in his autobiographical , notes Historia calamitatum mearum. Students bom many lands, including future bishops, cardinals, and even a pope ( Celestine II ) were attracted by the brilliance of his mind and the warmth of his personality. At this time he became involved in the much romanticized episode with Héloïse, niece of Canon Fulbert. This affair resulted in the birth of a child and their I subsequent secret marriage. Héloïse’s uncle took I revenge on Abelard by having him emasculated. After this cruel punishment, Abelard retired to the Abbey of St. Denis. Héloïse meanwhile had I joined the Benedictine nuns at Argenteuil.

Abelard resumed his teaching at St. Denis, hut his efforts to reform the monastic discipline there brought him into disfavor. The stituation was further complicated by publication of his treatise De unitate et trinitate divina, which was condemned in 1121 by the Council of Soissons. There followed a period of enforced retirement at the Monastery of St. Médard, after which he returned to St. Denis. Further difficulties with his superiors at St. Denis led to Abelard’s flight from the abbey and his establishment of an oratory of the Paraclete near Nogent-sur-Seine. Here he lectured to a large student following until 1125, when he was elected abbot of St. Gildas de Rhuys in Brittany. After several years of unsuccessful effort to impose a stricter rule, Abelard left the abbey and returned to the Paraclete, where Héloïse had become superior of the convent he had founded. It is thought that the famous letters between Abelard and Héloïse were exchanged at this time.

In 1136, Abelard was again in Paris, teaching at Ste. Geneviève. Here new charges of heresy were leveled against him by Bernard of Clairvaux, causing Abelard to be condemned by the Council of Sens in 1141. He set out for Rome to plead his case before Pope Innocent II but learned that the pope had confirmed his condemnation and enjoined him from teaching.

Abelard was befriended by the abbot of Cluny, Peter the Venerable, and through Peter’s good offices Abelard regained Bernard’s friendship and retracted his theological errors. Abelard died at the Priory of St. Marcel, near Chalonsur-Saône, on April 21, 1142. His body was taken to the Paraclete and later transferred to the cemetery of Père Lachaise in Paris.

Contributions to Philosophy and Theology:

Abelard wrote a number of philosophical and theological works. They include several commentaries on the lógica vetus (the logic known to him from Boethius’ interpretation of Aristotle); Dialéctica, his own elaboration of the logical doctrines; Theologia Christiana, an enlargement of his De unitate; Theologia—a. further expansion of the De unitate—of which the only extant section is Introductio ad theologiam; Sic et non, a collection of conflicting patristic texts; S cito teipsum, a moral treatise; and Dialogas inter philosophum, iudaeum et christianum, a defense of Christian doctrine.

Abelard was a leading figure in early Scholasticism, known principally for his part in the controversy on universals. In this dispute he took a position between Roscellinus’ nominalism and William of Champeaux’s realism. Accepting Aristotle’s definition of a universal as something that can be predicated of many things—”man ‘ is predicated of all human beings—Abelard asked himself whether universals exist in reality or only in thought. His answer was that universals are not real things, since each real thing is individual. On the other hand, universals are not mere words since ,they express a common reality that exists in things and serves as a basis for logical predication. Universals are concepts formed by abstraction in such a way that the nature of a thing is freed, as it were, from all individuality, with no special relation to any particular individual of the species. Thus Abelard avoided attributing to a universal a reality of its own or downgrading it to a verbal entity with no conceptual import. His position was close to the later concept of moderate realism.

Abelard also applied his dialectic to theology. He argued that faith and reason are as distinct and different as the theology and philosophy on which they rest, respectively. Yet theology needs philosophy, and especially dialectic, to establish its status as a science. As proof he tried to show in his Sic et non that the proper solution of a theological issue can be obtained only by an objective study of all divergent texts on the subject. In his Introductio ad theologiam he also made the attempt—first of its kind in the history of Scholasticism—to coordinate and treat systematically all current theological issues. He seems, however, to have carried his dialectic too far by exaggerating the power of human reason in matters of faith and rationalizing even the mysteries of Christian doctrine.