What are the characteristics of paramecium? Information about the features, facts, habitat and structure of paramecium.

PARAMECIUM, a genus of protozoans, including eight generally accepted species. The size varies among the species from about 0.003 inch (0.07 mm) to 0.012 inch (0.30 mm). Most live in fresh water in lakes, ponds, and flowing or stagnant water. The best-known species appear to be worldwide in distribution.

The Paramecium’s body is covered with several thousand short hairlike cilia that perform efficient, coordinated beating to produce locomotion in a spiral path. Although paramecia are flexible, the lady’s slipper shape is maintained by a thin, relatively stiff covering called the pellicle. From the front of the body a conspicuous spiral groove (oral groove) curves backward to about the midpoint of the body. 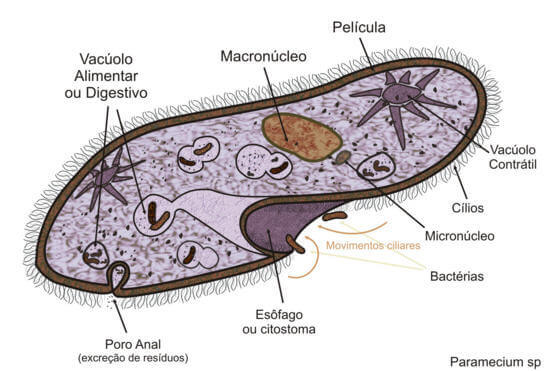 Their food consists of bacteria and other minute organisms and particles of organic debris. It appears that paramecia can exert some select tion for digestible as against nondigestible materials. Food particles, propelled by the cilia in the oral groove, reach an opening, the cell mouth (cytostome), which leads into a short gullet. Specialized cilia in the gullet pack food particles into its inner end, which swells and finally breaks free as a food vacuole. Another then begins to form in its place. After circulating once around the body in about two hours, the food vacuoles discharge the indigestible remains at a special pore, the cytopyge.

The chemistry of digestion in paramecia is not greatly different from that in higher animals, in that both possess similar starch- and protein-splitting enzymes. Paramecia probably obtain the oxygen necessary for respiration both through the general cell surface and from water taken with food into the food vacuoles. Water probably also seeps in through the pellicle, and, together with the food-vacuole, water must somehow be voided so that the body will not swell and burst. This is accomplished by small contractile vacuoles, usually one near each end of the body, which open by a small port at the body surface. Vacuole dilation and contraction empties the body of excess water and helps rid it of excretory wastes.

Special stains demonstrate a system of fibrils that lies under the pellicle and interconnects granules at the bases of the cilia. Some students have suggested that it is analogous in function to the nervous system of higher animals.

Paramecia respond to touch, water currents, gravity, certain chemicals, temperature, light, and electric currents, usually in such a way as to ensure survival. Groups of paramecia tend to congregate in favorable areas because each individual performs a so-called avoiding reaction to unfavorable stimuli, backing away from such stimuli and darting off in an altered direction.

Large numbers of minute bodies called trichocysts lie just under the pellicle. As a reaction to injury, apparently, they discharge an extremely fine thread. It has been suggested trichocysts are defensive, a means of attachment, or both.

The body of a Paramecium contains a larger macronucleus and (according to species) one or more smaller micronuclei. The macronucleus is essential to life, for without it the Paramecium soon dies. But the micronucleus, although important in reproduction and thus to the species, is not so essential to the life of the individual.

In the nonsexual method, reproduction is by binary fission, the Paramecium dividing nearly equally into front and rear portions, the micro-nucleus dividing by mitosis. Considerable evidence indicates the occurrence of a process of macronuclear reorganization called autogamy.

In a sexual process known as conjugation, two individuals come together and exchange micronuclear components, followed by a series of nuclear and body divisions. Inheritance in paramecia is similar to that in higher animals.