Originally Ahura; ‘the lord’, may have been connected with Mithra, the ruler of the day, before he was elevated to the position of the supreme being in Persian religion by the prophet Zoroaster, and he acquired the epithet Mazdah, ‘wise’. Although the Irido-European pastoralists settled on the Iranian plateau derived their gods from the same pantheon as the Aryan conquerors of India, the eourse of their religious development was entirely different. While the Indian mind sought a unifying principle within a multiplicity of gods, in Persia this monistic tendeney moved in the direction of a universal monotheism under the inspiration of Zoroaster. 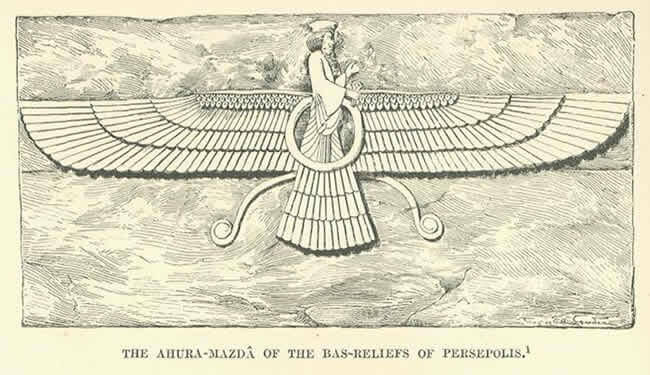 Fire was conceived of as the symbol of truth which Ahura Mazdah bestowed on his followers. Light was opposed to darkness and associated with truth and righteousness, asha. In the myth of Atar, the fire of the sky and Ahura Mazdah’s son, there is a struggle with Azhi Dahaka, the three-headed dragon, who had usurped the earthly throne. His rule brought ‘need and misery, hunger and thirst, old age and death, mourning and lamentation, excessive heat and cold, and the intermingling of demons and men. Atar overcame the dragon, who was either consigned to the bottom of the deep ocean or chained on a high mountain. But Azhi Dahaka was destined to escape at the end of the world and destroy a third of mankind, before he was slain. The divine fire, the spark indwelling in mankind, was the symbol of Ahura Mazdah, and in fire-temples the flame burning perpetually indicated his presence.

Ahura Mazdah is the god of prophetic revelation, the sole deity revealing himself to a traditionally polytheistic society not yer ready to receive the totality of his message. The Zoroastrianism of the Persian kings aceommodated existing religious practices, not least because it was contralled by a priestly caste, the magi, with which it previously had nothing to do. Onee the followers of the prophet realized that the establishment on earth of a righteous kingdom was not possible in the present cyde of world ages, the way was open for Persian mythology to evolve a thorough dualism, with the source of evil increasingly personified. At last two absolute rivals emerged: Ahriman, the master of deceit, challenged Ohrmuzd, a contraction of Ahura Mazdah, and in the ranks of their hostile hosts room was made for the ancient gods whom Zoroaster attempted to abolish.