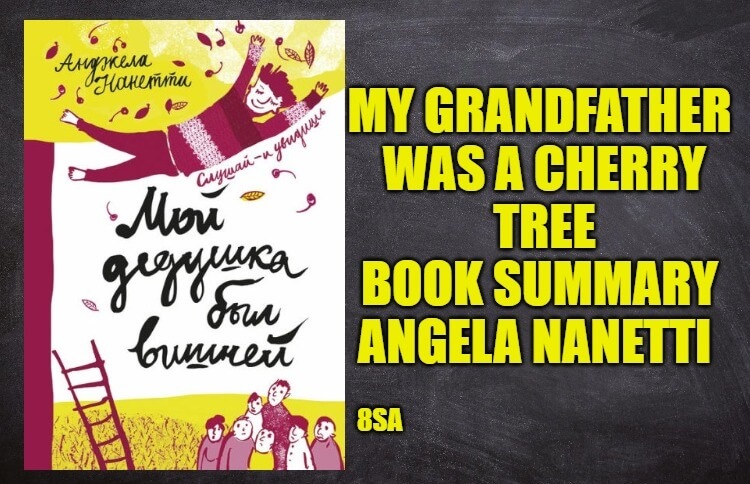 My Grandfather was a Cherry Tree

One of the strongest writers of Italian literature, Hans Christian Andersen Award winner Angela Nanetti’s most loved novel all over the world.

The book is about this, about a “crazy” and extraordinary grandfather and his cherry tree, about grandmother Teodolinda who has two big soft things in front of her that Tonino finds comfortable when she hugs him, about the goose Alfonsina and about Tonino who will never forget the grandfather who climbed trees.

The story focuses on the life of Tonino and his grandfather Ottaviano after the death of their grandmother Teodolinda. The grandfather, in fact, categorically refuses to go and live in the city, near his daughter. He would get bored and become like the others, while his life is there in the countryside, where he built everything together with his wife. He therefore remains alone in a house that is too big, with too many things to do.

One summer, however, Tonino’s father (already in crisis with his wife, in fact he will also face the divorce issue) breaks his leg and his mother has to take care of everything. So she decides to send the child to spend the holidays with his grandfather, so as to keep him company. Tonino will always remember that summer, in which he experiences incredible adventures. His grandfather teaches him everything he knows, they buy a husband for Alfonsina the goose (which, according to the child, hosts her grandmother’s spirit!), they climb the Felice cherry tree, catch fish by swimming in their underwear in the river… Every morning, the grandfather prepares the eggnog for his grandson, waking him up singing.

Even good things come to an end…

Everything falls apart when summer ends; the grandfather is left alone and enters into a sort of depression, Tonino does not feel good at school, because the teacher thinks that he is making up everything she says about his grandfather and his classmates laugh at him; Tonino’s parents separate… Wonderful holidays seem like a distant dream.

During the winter, after a fun carnival spent with mum and grandpa making pancakes and singing, there is a terrible frost. The grandfather, in order not to freeze the cherry tree which would otherwise die, stays all night under the tree with the fire lit. He saves the cherry tree, but he falls very seriously ill, an illness from which he will never recover.

Tonino will suffer greatly for the loss of his grandfather (whose spirit dwells in the Felice cherry tree, he is sure of it) and also his mother, who until then had tried to make his grandfather responsible, shows his father’s character: he moves with his son to the country house , where they keep the two geese with their offspring, sends Tonino to the village school where he is much better off and fights against a construction company that wants to cut down the cherry tree to make a road pass through there.

A secret language links the child to his grandfather who finds a correspondence in the tree that is incomprehensible to others. That’s why Tonino is determined to save Felice, to save the memory of his grandparents and his mother’s childhood beyond death: “you don’t die until someone loves you, remember that”. Those who leave us cannot be seen, they turn into something else: grandfather Ottaviano in a cherry tree.