What is Mumps? What are the symptoms, causes and treatments of Mumps disease in children.

Mumps; Mumps is principally a disease of the saliva glands, most commonly the parotid glands, which lie in the hollow just under the lobe of the ear. First the gland fills in the hollow, then it swells the whole side of the face. It pushes the lobe of the ear upward. If you run your fingers up and down the back part of the jawbone, you can feel that the hard swelling runs forward, covering part of the jawbone. 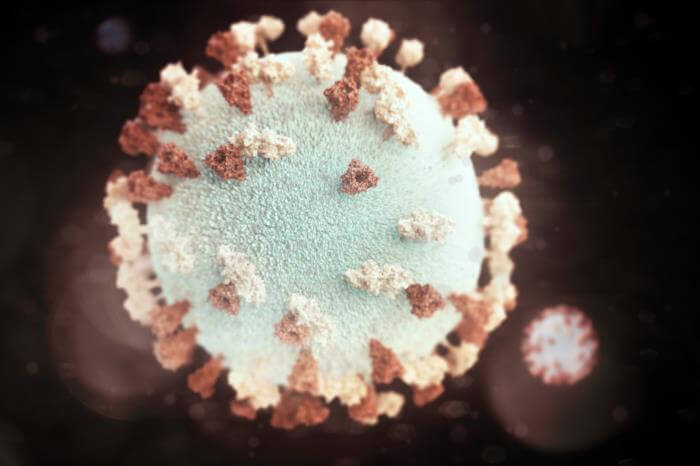 This illustration provided a 3D graphic representation of a spherical-shaped mumps virus particle, that was studded with glycoprotein tubercles. The studs, colorized reddish-brown, are known as F-proteins (fusion), and those colorized beige, are referred to as HN-proteins (hemagglutinin-neuraminidase). (Source : CDC/ Allison M. Maiuri, MPH, CHES / Illustrator: Alissa Eckert)

When a child has a swelling in the side of the neck, the question always comes up, Is it mumps (a specific infection of the parotid saliva gland), or is it one of the other, rarer diseases of the parotid gland (which may recur repeatedly), or is it an ordinary swollen gland (one of the lymph glands in the side of the neck)? The ordinary lymph glands that sometimes swell after a sore throat are lower down on the neck, not tucked up under the ear lobe. The hard swelling does not cross the jawbone.

When a small child develops mumps, the swelling under the ear is usually the first thing noticed. An older child may complain of pain around his ear or in the side of his throat, especially on swallowing or chewing, for aday before the swelling begins. He may feel generally sick. There is often little fever in the beginning, but it may go higher on the second or third day. Most commonly the swelling begins on one side first, but spreads to the other side in a day or two. Sometimes it takes a week or more to spread to the other side, and of course, in some cases the second side never swells.

There are other saliva glands besides the parotids, and mumps sometimes spreads to these, too. There are the submaxillary glands tucked up under the lower part of the jawbone. The sublinguals are just behind the point of the chin. Occasionally a person gets one of the complications of mumps without having had a swelling in any of the saliva glands. A very mild mumps swelling may go away in 3 or 4 days. The average swelling lasts a week to 10 days.

Mumps can spread to the testicles in men and boys who have reached the age of puberty. This usually involves only one testicle. But even when both are inflamed, it is rare for this to cause sterility (inability to have children). However, it is preferable for boys to have mumps before puberty, and some doctors recommend deliberate exposure. Adolescent boys and men should avoid exposure. Mumps sometimes causes a special kind of mumps meningitis. The child has high fever, a stiff neek, and is demious. This is seldom dangerous. Infection of the pancreas gland in the abdomen may cause severe abdominal pain and vomiting.

Mumps is one contagious disease that some doctors, think you can catch a second time, so don’t do any unnecessary exposing. The fact that a person has had it on both sides doesn’t make any difference; he can still get it again. 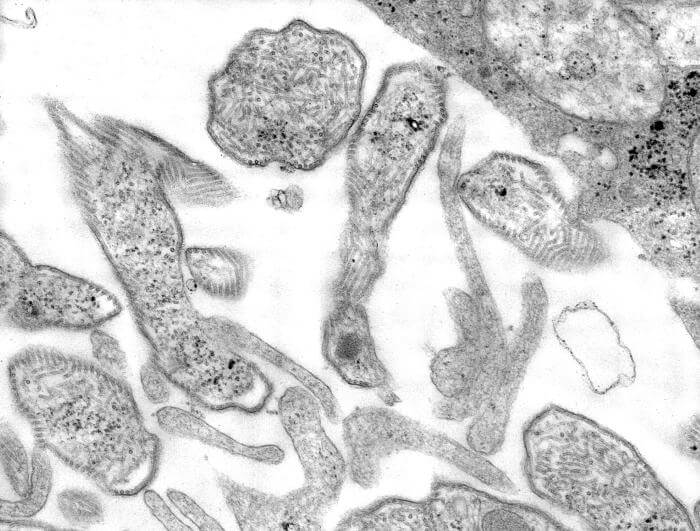 This 1977 thin-section transmission electron microscopic (TEM) image depicted the ultrastructural details exhibited by mumps virus particles that had been grown in a Vero cell culture. (Source : CDC/ Courtesy of A. Harrison and F. A. Murphy)

You should call the doctor for a suspected case of mumps. It is important to be eertain of the diagnosis. if it turns out to be a swollen lymph gland, the treatment is quite different. The child is usually kept in bed until the swelling is gone.

Some people can’t take tart-tasting foods like lemon juice during mumps (it hurts the inflamed glands), but others continue to enjoy them. So a lemon or pickle is no test of mumps. Mumps takes 2 to 3 weeks to develop after exposure.