Information on Marie Curie and Pierre Curie biographies, works on radioactivity and discoveries.

Pierre Curie (1859-1906) and Marie Curie (1867-1934), French scientists, whose isolation of polonium and radium marked the beginning of a new era in the study of atomic structure.

Pierre Curie was born in Paris on May 15, 1859, the son of a physician. Until the age of 14 he was trained in science by his father, receiving only a minimum of the classical education that was standard in his time. He went to the Sorbonne at 16 and majored in physics. When he was only 19, he was appointed a teaching assistant and director of laboratory instruction at the Paris Faculty of Sciences. 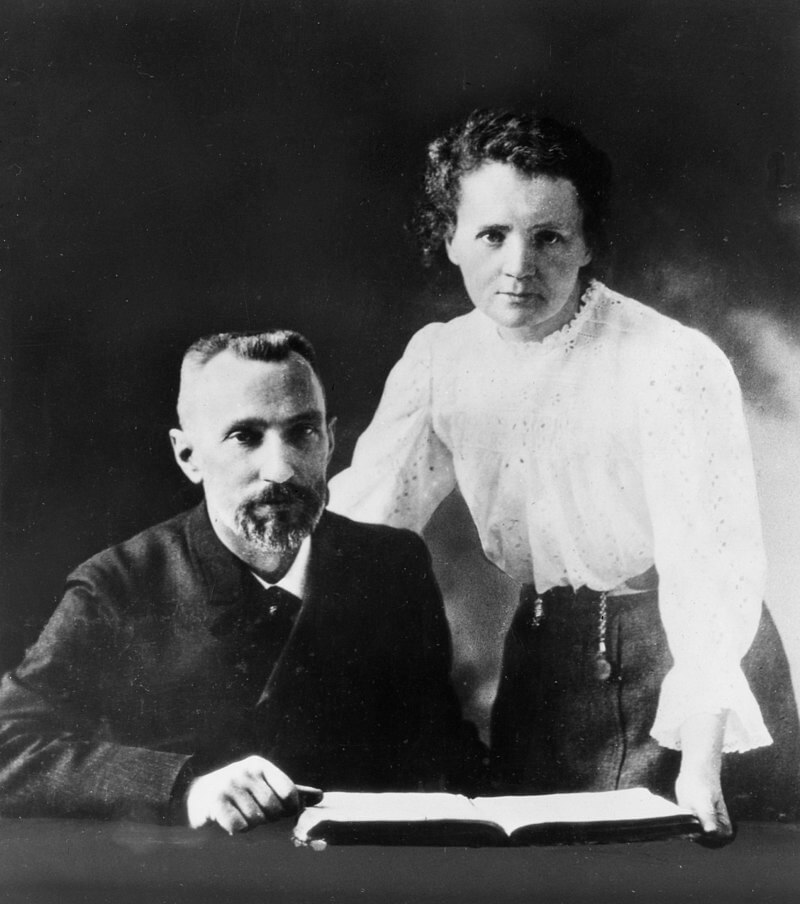 Early Careers. In 1880, Pierre Curie and his brother Jacques discovered piezoelectricity, the appearance of electrical charges on the surface of certain insulating crystals when subjected to mechanical stresses. About 1891, Pierre began an intense investigation of magnetism at elevated temperatures. This led to the discovery of the Curie point—the temperature at which ferromagnetic substances lose their magnetism. Further research led to the formulation of Curie’s law, which states that the magnetic susceptibility of ferromagnetic substances above the Curie point is inversely proportional to the absolute temperature. This law is not strictly true and was modified by Pierre Weiss in 1907.

In 1895, Pierre married Marie Sklodowska, a young student from Poland, who had begun her scientific career with an investigation of the magnetic properties of different kinds of steel. In fact, it was their mutual interest in magnetism that drew them together. Marie Sklodowska was born in Warsaw on Nov. 7, 1867. She made a brilliant record as a student but found no outlet for her talents in her native country. She became a private tutor and might have remained in that position had it not been for her sister Bronislawa, who lived in Paris. Marie joined her sister in 1891 and studied mathematics, physics, and chemistry at the Sorbonne. Her marriage to Pierre Curie thrust her into the mainstream of French science. Their scientific careers were to remain intertwined until Pierre’s tragic death.

In 1896, Henri Becquerel discovered that uranium salts emitted rays that strongly resembled X-rays in their penetrating power. He was soon able to show that this radiation was not, like phosphorescence, dependent on an outside source of energy but appeared to arise spontaneously from uranium itself.

The Curies set out to discover if there were other substances that emitted this curious radiation. They tested a number of elements and soon found that thorium, like uranium, was radioactive. Marie Curie then began a systematic study of the ores of uranium and thorium and found that the mineral pitchblende was highly radioactive. Indeed, the ore appeared to be far more radioactive than pure uranium; and Mme. Curie immediately suspected that it must contain an unknown element of greater radioactivity than either uranium or thorium. Thus began the research that culminated in the discovery of both polonium and radium. 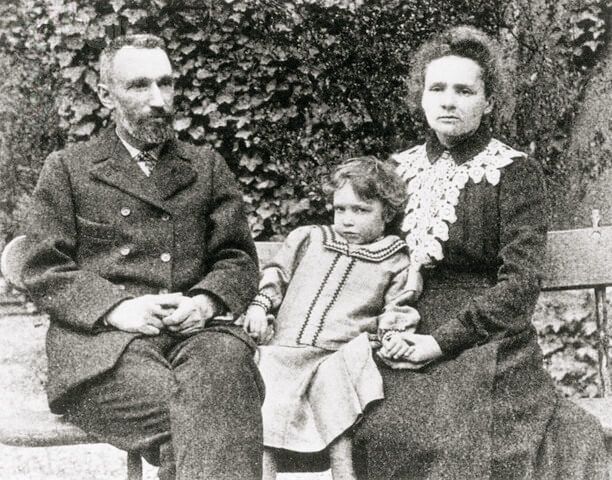 Pitchblende is a complex mineral, and the chemical separation of its constituents was an arduous task. The discovery of polonium, named after Mme. Curie’s homeland, was relatively easy. It resembles bismuth in its chemistry and was the only bismuthlike substance in the ore. Radium, however, was more elusive. It is closely related chemically to barium, and pitchblende contains both elements. By 1898, traces of radium had been obtained, but workable quantities, free from contamination with barium, were still beyond reach. The Curies undertook the arduous task of separation by differential crystallization. From a ton of pitchblende, one tenth of a gram of radium chloride was separated in 1902. By 1910, Mme. Curie had isolated the pure radium metal.

The result of the Curies’ work was epoch-making. Badium’s radioactivity was so great that it could not be ignored. It seemed to contradict the principle of the conservation of energy and thereby forced a reconsideration of the foundations of physics. On the experimental level the discovery of radium provided men like Ernest Rutherford with sources of radioactivity with which they could probe the structure of the atom. As a result of Rutherford’s experiments with alpha radiation, the nuclear atom was first postulated. In medicine, the radioactivity of radium appeared to offer a means by which cancer could be successfully attacked.

In 1903 the Curies shared the Nobel Prize in physics with Henri Becquerel. They had achieved success both professionally and in their personal lives. Their first daughter, Irène, who later won the Nobel Prize in chemistry, was born in 1897. A second daughter, Eve, who became a well-known writer, was bom in 1904. In the same year Pierre was named to the chair in physics at the Sorbonne, and on July 3, 1905, he was elected to the Academy of Sciences.

On April 19, 1906, their lives together came to an end when Pierre was run over and instantly killed on the Rue Dauphine in Paris. Marie continued her life in science. In 1909 she was named to her husband’s chair in physics at the Sorbonne; in 1911 she was awarded the Nobel Prize in chemistry for her isolation of radium and her studies of its chemistry. She was the only person ever to have been awarded the Nobel Prize in both physics and chemistry. In spite of this, the Academy of Sciences refused to abandon its prejudice against women, and she failed by one vote to be elected to membership. 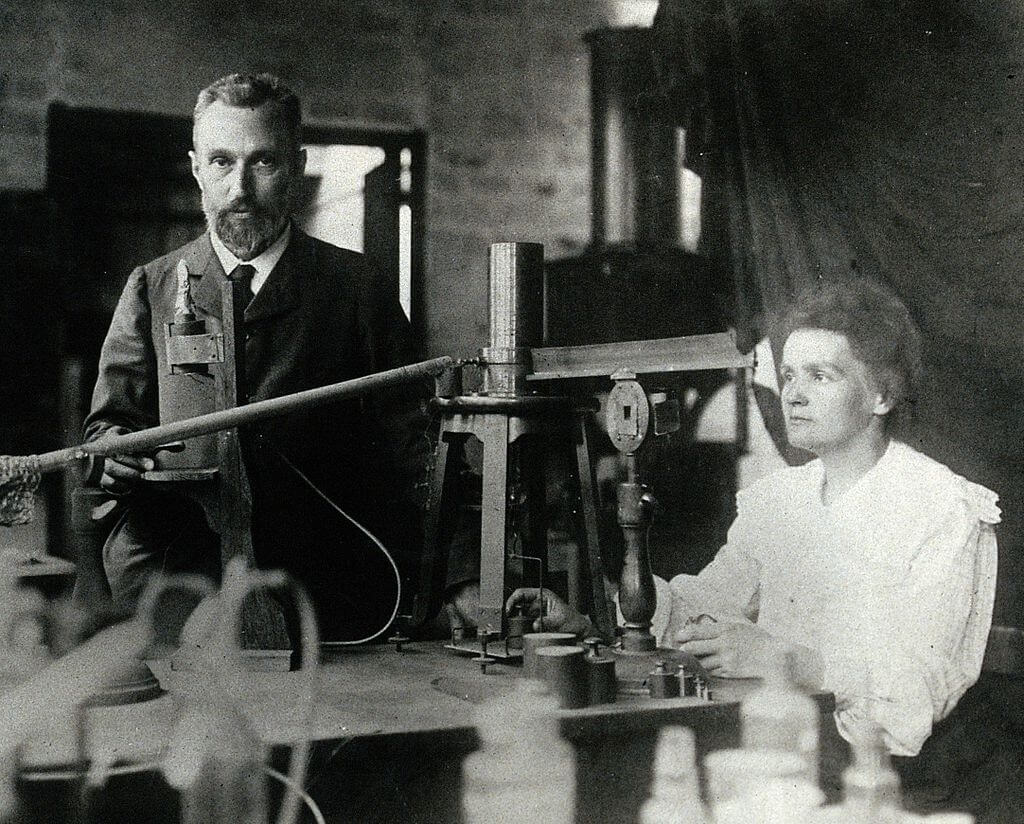 The remainder of Marie’s life was devoted to the further exploration of the properties of radioactive substances. She headed the Pasteur Institute and a laboratory of radioactivity, created for her by the University of Paris, until her death, in Savoy, on July 4, 1934.