How to use magnetism and electricity on machines. How an electric bell, telegraphy, telephone and electric motor work.

MAGNETISM AND ELECTRICITY AT WORK

Every time we use a car we need magnetism and electricity to get us going and keep us moving. When we listen to music on a radio electromagnetism has been used in various ways “before the sound reaches our ears. Many machines such as washing machines, hairdryers, mixers and power tools would not be much use without their electric motors. Generally, life is made more interesting and enjoyable due to the ways in which magnetism and electricity have been put to work for us.

Electrical machines which use the magnetic effect of an electric current usually have a coil which acts as an electromagnet. 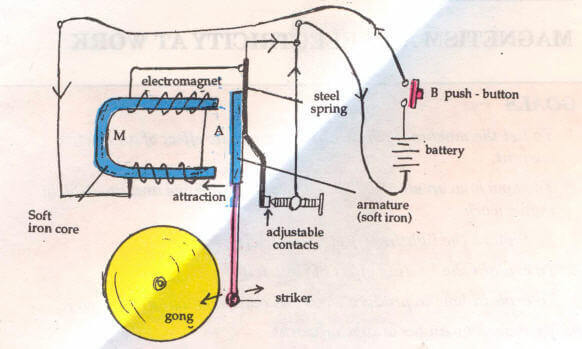 One of the most useful and practical devices for communication is the telegraph. The first telegraph and code were invented by Samuel Morse in 1837. The code, called the Morse Code, was named after him. 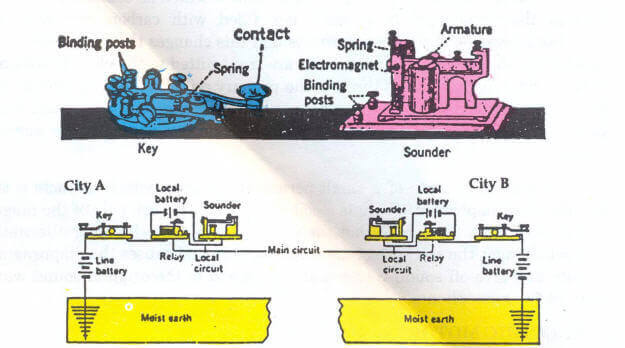 Alexander Graham Bell invented the first telephone in 1876. A telephone consists of three parts, microphone, an electric circuit and earpiece.

The microphone has a thin diaphragm that vibrates as sound waves hit it. Behind the diaphragm is a small box filled with carbon granules. The vibrations press on the carbon granules and this changes the resistance to the strength of the current. The vibrations are transmitted to the electric wire as a current. The current passes through the primary coil of a step- up transformer to a secondary coil where an alternating current represents the sound waves produced. This alternating current passes along the wires to the earpiece receiver.

The earpiece consists of a small permanent magnet which attracts a thin flexible steel diaphragm. There is a coil of wire around each pole of the magnet and it is through these coils that the current flows. The changing alternating current changes the strength of the magnetic field and causes the diaphragm to vibrate and give off sound waves that correspond to the original sound waves that hit the microphone.