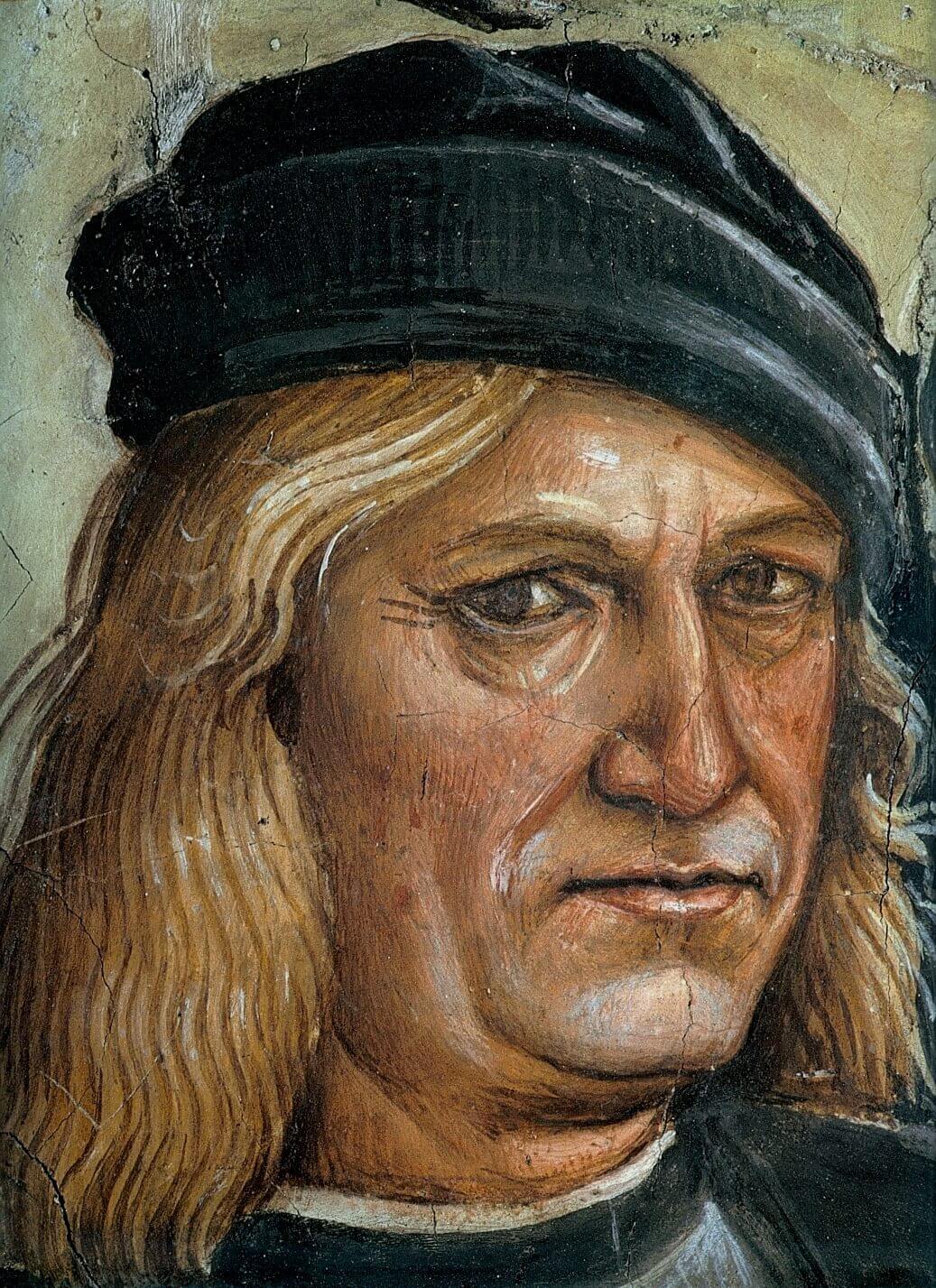 Luca Signorelli; (1441-1523), Italian painter, who was one of the great masters of the early Renaissance in Italy. As a predecessor of Michelangelo, he is significant particularly for his interest in the anatomy and action of the human figure and for pioneering its use as the dominant feature of monumental mural decoration.

Luca d’Egido di Ventura de’ Signorelli was born in Cortona. He was probably trained at Arezzo by Piero della Francesca. His early works are listed by Ciorgio Vasari as having been painted in Arezzo churches, but they are lost. In 1475, Signorelli was working in Florence, probably under the influence of Andrea del Verrocchio and the brothers Antonio and Piero Pollaiuolo. By 1479 he was back in Cortona and held a number of political offices there. Outside commissions took him to Loreto (frescoes in the Sagrestia della Cura, about 1480); Rome (frescoes in the Sistine Chapel, 1482-1483); Florence ( 1491 ), as counsel for the projected facade of the cathedral and to paint several panels for Lorenzo the Magnificent; and Orvieto (1499-1506), to work on the frescoes of the Chapel of San Brizio in the cathedral. 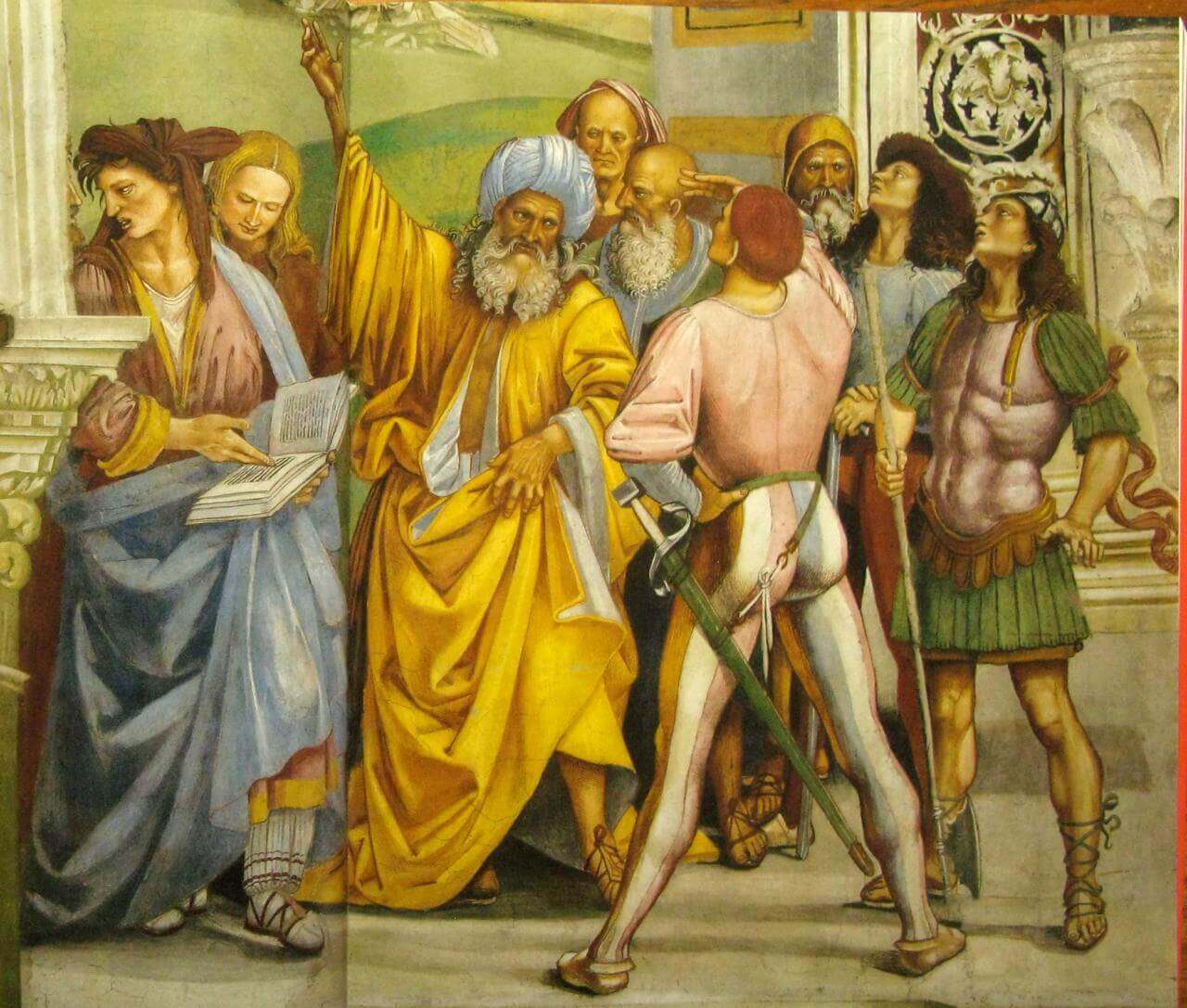 In 1506, Signorelli went to Siena, where he made cartoons (never carried out) for floor mosaies in the cathedral and where he participated in fresco decorations of the Pandolfo Petrucci Palace, which were executed largely by Cirolamo Cenga. In 1508-1509 and in 1513, Pope Julius II called him to Rome, where he failed to receive a commission but had some contact with Michelangelo. In 1512 he was sent to Florence as ambassador of Cortona to celebrate the Medicis’ return. From 1513 he lived mostly in Cortona, where he died on Oct. 16, 1523.

Signorelli’s work shows a consistent respect for the monumental tradition begun with Masaccio’s revolutionary Payment of the Tribute Money (Brancacci Chapel, Florence) -a tradition developed through the future compositions of Paolo Uccello, Piero della Francesca, Antonio Pollaiuolo, and Melozzo da Forli. His early frescoes in Loreto, compared to the relatively crude yet forceful figures of his predecessors, show a tendeney to subordinate the figure com positian to the architectural framework. The same feature appears in the frescoes of the Sistine Chapel, which may have been due in part to his close collaboration with the more restrained II Perugino and the Florentines, Chirlandaio and Sandro Botticelli, and in part to the panel-like character of this wall series. 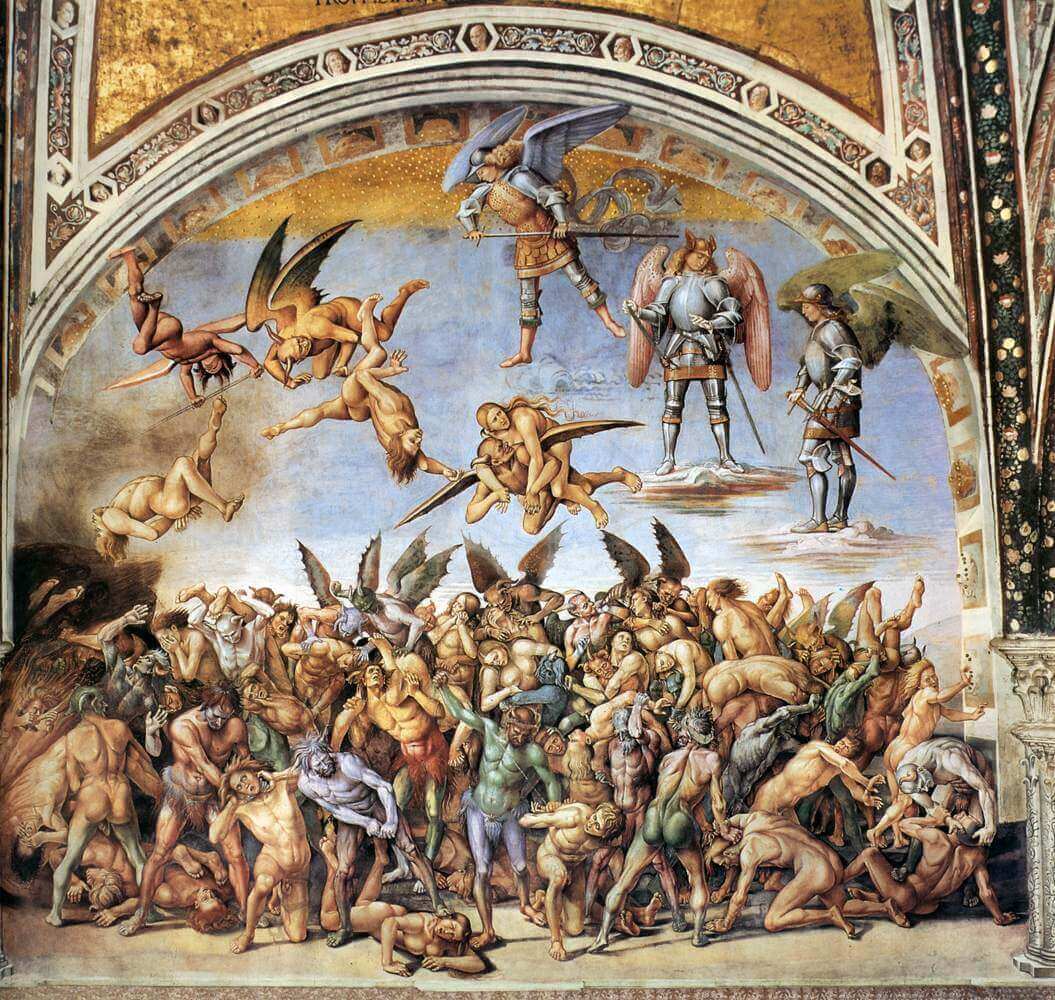 Signorelli’ s most important works are the frescoes of the Brizio Chapel in the cathedral of Orvieto. Begun by Fra Angelico in 1447 and continued by Benozzo Gozzoli on the vaults of the chapel, the scheme involves a Christ Enthroned, surrounded by the celestial hosts of a Last Judgment. The frescoes extend to the walls of the two bays in free interpretations of such themes as the Fall of the Damned and Crowning of the Elect, and the Fall of the Antiehrist and Resurrection.

There are also decorative portraits of famous men of antiquity and seenes from Dante, Vergi I, and Ovid. The striking combination of powerful, anatomically constructed figures, dynamically composed into an extended space and its architectural framework, is matched by an equally striking originality of content. Signorelli brilliantly combined the traditional Last Judgment theme with motives from Dantes Divine Comedy and from such didactic works as Cirolamo Savonarola’s sermons.

Signorelli’s altar and easel paintings olfer a more intimate and direct understanding of his development as a painter. The early Flagellation panel (Brera Museum, Milan) reveals an interest in light as a means of modeling forms, in luminosity of color, and in strong figures, as well as a tendeney toward exaggerated movement. 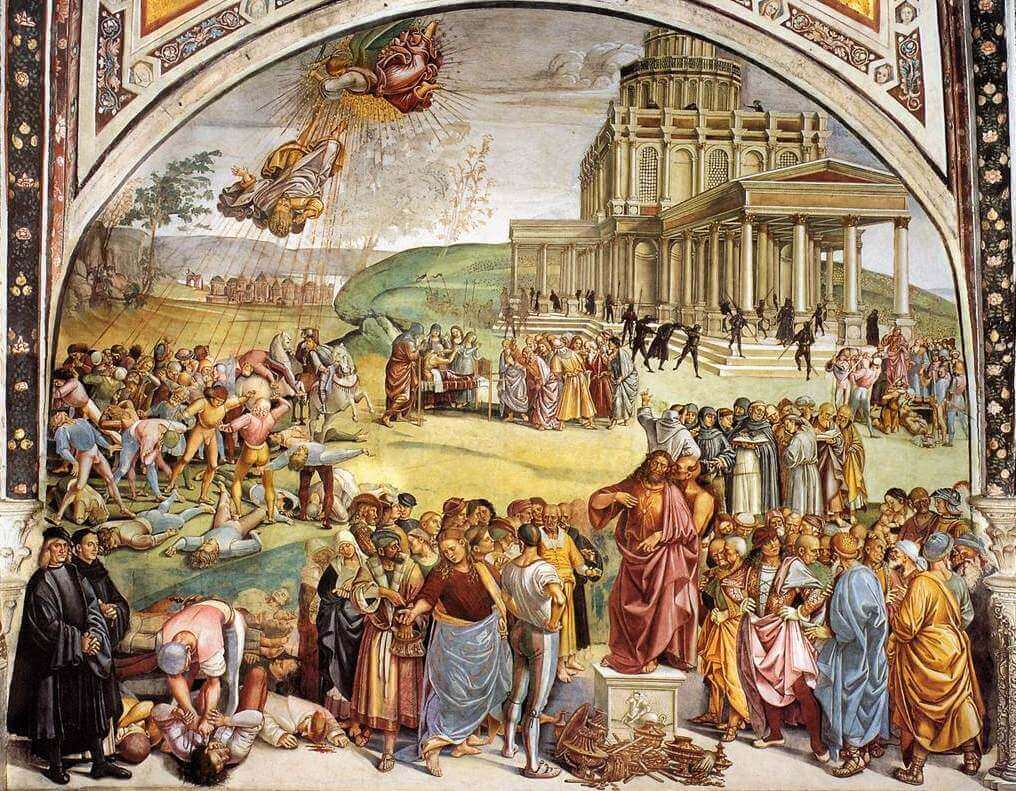 His development can be followed in the Virgin Enthroned altar (1484), painted for the Chapel of St. Onofrio in the cathedral of Perugia, the Circumcision altar (1492; National Gallery, London); and the famous tondo (Uffizi Gallery, Florence ), with its scene of Madonna and Child enlivened by classical nude figures in the background. This latter panel, together with Pan as God of Natural Life and Music (destroyed in the Berlin Museum during World War II), done for Lorenzo the Magnificent just before his death in 1492, reflects Lorenzo’ s classieal interests and those of his period.