Stephen Decatur; (1779-1820), American commodore, who stopped the depredations of Barbary pirates on American snipping. He was born, on Jan. 5, 1779, at Sinepuxent, near Berlin, Md., where his mother had fled from their Philadelphia home during the British occupation. His father, Stephen Decatur (1752-1808), was a Bevolutionary War privateersman, a merchant ship master and owner, and a Navy captain during the war with France. 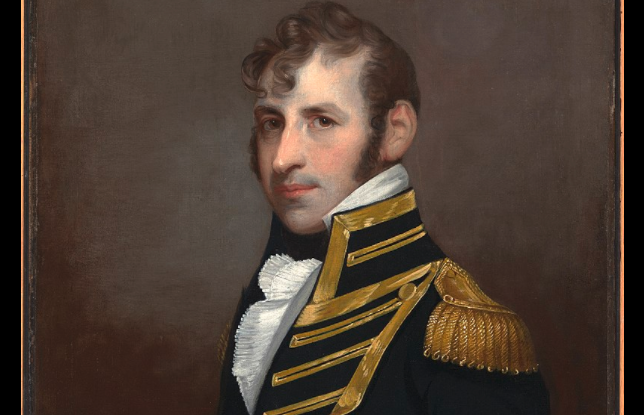 Decatur was appointed midshipman on April 30, 1798, and served in the Mediterranean from 1801 to 1805 during the Tripolitan War. Commanding the schooner Enterprise, he captured the Tripolitan ketch Mastico on Dec. 23, 1803, and renamed her Intrepid. Decatur was selected by Commodore Edward Preble to take the Intrepid and destroy the frigate Philadelphia—his father’s flagship a few years earlier—which had grounded and been captured by the Tripolitans on Oct. 31, 1803. During the night of Feb. 16, 1804, Decatur sailed the disguised Intrepid into Tripoli harbor and alongside the frigate. His men swarmed aboard, drove the surprised crew overboard, set the ship afire, and were off in 20 minutes. Decatur boldly withdrew under heavy fire, suffering no losses. This exploit earned him a captain’s commission and a sword from Congress.

During a bombardment of Tripoli in August 1804, Decatur led his gunboats against the enemy’s, capturing two of the enemy’s boats in a hand-to-hand fight in which his brother James was killed. Decatur himself was saved only by the prompt action of Seaman Daniel Frazier (not Reuben James, as has been claimed). Decatur, then 25, commanded a frigate until peace was signed in 1805. In 1808 he was a member of the court-martial that found Capt. James Barron guilty after the Chesapeake and Leopard incident.

War of 1812. At the outbreak of the War of 1812, Decatur was in command of the United States (44 guns), the first ship on which he had served. Encountering the British frigate Macedonian (38 guns) on Oct. 25, 1812, he defeated and captured her by outstanding seamanship and she was taken into the U. S. Navy. In May 1813 the two ships sailed from New York, trying to get to sea via Long Island Sound, but they were driven into New London by a superior British force and remained blockaded.

Trying to run the blockade again 20 months later in the faster President, Decatur sailed from New York on the night of Jan. 14, 1815, in a gale, and on the next day fell in with five British ships. Eluding all but the Endymion (40 guns), he fought and silenced her in two hours, but his ship was so badly damaged that he had to surrender to the other British ships.

During the War of 1812, Algiers breaking a treaty signed in 1795, demanded additional tribute from the United States and refused to accept ransom for some American prisoners. After the war Decatur was sent to the Mediterranean with a large squadron and captured the Algerian flagship Mashuda off Cape de Gat, Spain. Between June and August 1815 through his reputation and energy and a show of naval force, he exacted peace terms from Algeria and indemnities for unneutral acts from Tunis and Tripoli.

From November 1815 until his death he served on the new Board of Navy Commissioners. He opposed reinstatement of Capt. James Baron, who challenged him to a duel and mortal wounded him at Bladensburg, Md. Decatur died in Washington on March 22, 1820.