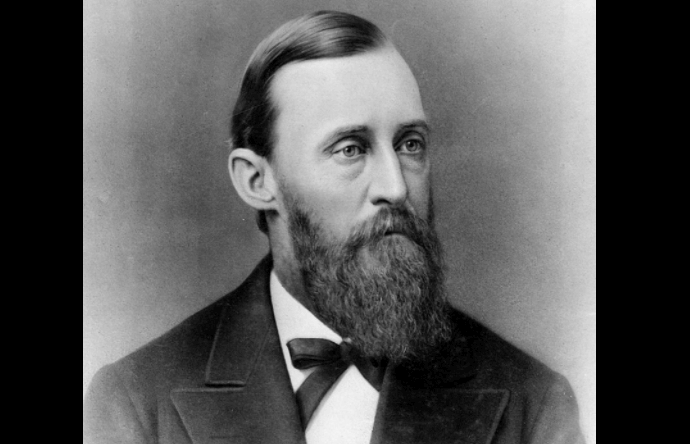 Ferdinand Vandeveer Hayden; (1829-1887), American geologist. He was born at Westfield, Mass., on Sept. 7, 1829. In 1853 he was sent by James Hall to collect fossils from the Dakota Badlands. This began a series of expeditions in the next 30 years (broken only by service as a surgeon in the Civil War), during which Hayden explored large areas of the Great Plains and eastern Rockies. Hayden’s surveys, which owed much to the enthusiasm of their leader (called by the Sioux Indians “The-man-who-picks-up-rocks-running”), produced maps and some 50 volumes of reports treating the geology, botany, zoology, and history of the region; they laid the basis for the U. S. Geological Survey (1879). Hayden collected fossils, established geological sequences of rocks, recognized overturning of strata in Colorado, and studied updoming, folding, and fracturing in the Rockies.

Hayden also played a major role in the creation of Yellowstone National Park (1872). He was professor of geology at the University of Pennsylvania from 1865 to 1872 and later served on the U. S. Geological Survey, retiring in 1886. Hayden died in Philadelphia on Dec. 22, 1887.

Hayden Valley in Yellowstone is named after him. In 2018, Native American leaders called for his name to be changed, because he “advocated for the extermination of tribal peoples who refused to comply with federal dictates.” The city of Hayden, Colorado, located in the Yampa River Valley, is named after him. Many mountain peaks are also named after him. The Carex haydenian sedge was named for him by Stephen Thayer Olney, in 1871. A subspecies of snake, Thamnophis radix haydenii, was named for him by Robert Kennicott in 1860. A land snail, Oreohelix haydeni, was named for him by William Gabb in 1869. Hayden Hall at the University of Pennsylvania, which formerly housed the dental school, now houses the departments of bioengineering and earth sciences.