Karl Jaspers; (1883-1969), German philosopher, a leading figure in existentialism. He describes the human situation as one of simultaneously gaining rational knowledge of the physical world, experiencing existence in terms of freedom, limitation, and communication, and grasping for a transcendent reality. 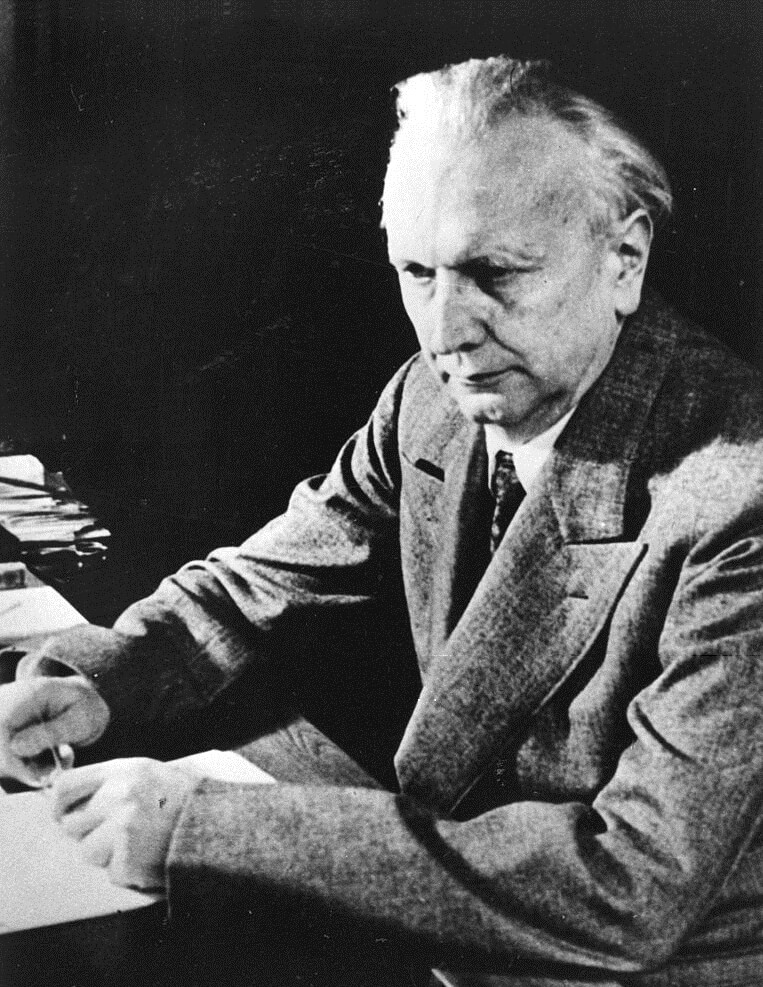 Jaspers was born in Oldenburg on Feb. 23, 1883. After studying medicine, he taught psychiatry and then philosophy at the University of Heidelberg. He was removed from his post by the Nazis because of his political views and his Jewish wife but was reinstated in 1945. He went to the University of Basel in 1948 to teach philosophy. He died in Basel on Feb. 26, 1969.

In his masterpiece, Philosophie (1932), Jaspers distinguishes three levels on which the existentialist should interpret his situation. On the first level—”philosophical orientation in the world”—man unifies material from physical, psychological, and social sciences to form a general concept of the world within which he remains bound. Jaspers’ respect for the sciences, resulting from his medical training and pioneer work in psychiatry, makes him unique among existentialists. He insists that man is responsible not only as a social agent but also as a student of science. Jaspers therefore permits no subjective flight from the world but requires an objective, scientific study of nature and man. Yet, in reaction to logical positivism, he stresses the pluralism of scientific methods and man’s need to grasp reality nonobjectively;

Such a reality is to be found on Jaspers’ second level of interpretation, “the illumination of existence” (Existenz, or human reality). The existential level is characterized by man’s distinctively human circumstances—his freedom to make choices and struggle against “bad will”; his historicity, which makes him see things from a certain perspective instead of objectively; his experience of such tragic “limit-situations” as conflict, suffering, and death; and his effort to communicate with others. This view of man, stressing will, reflects the influence of Kierkegaard and Nietzsche, which Jaspers recognizes in Reason and Existenz.

Man, however, is content neither with exploring the natural world nor with dwelling on his own freedom. He is constantly seeking a share in the transcendent reality of “the encompassing,” or the divine. The attempt at transcendence is the concern of Jaspers’ third level of interpretation, “metaphysics.” Man’s freedom must incorporate the endeavor to achieve transcendence, even though all efforts at literal comprehension of the encompassing are destined for “shipwreck,” and man remains bound by his presence in the world and by the limit-situations.

Jaspers developed the implications of his philosophy for cultural history, theological criticism, and social analysis. In The Great Philosophers he shows that of all the existentialists he is the most sympathetic toward past thinkers as contributors to man’s understanding of life and to his hope for the future. In Philosophical Faith and Revelation, however, Jaspers severely limits theology to a reading of ambiguous ciphers symbolizing the divine and upholds a “philosophical faith ‘ in reason, freedom, and the transcendent. In Man in the Modern Age, against the prevailing mass rule, Jaspers appeals to man’s ever-fresh capacity for reasonable communication and the free redirection of his existence.