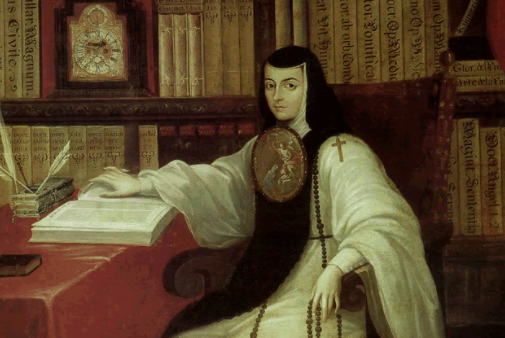 Juana Inés de la Cruz; (1651-1695), Mexican poet, scholar, and nun, who is considered the greatest lyric poet of the colonial period in Mexico. Born Juana de Asbaje y Ramírez, in San Miguel de Nepantla, on Nov. 12, 1651, she learned to read when she was 3 years old. She became a lady-in-waiting at the viceroy’s court in Mexico City, where she was popular because of her charm, beauty, and poetic talents. She longed to attend the university, but while the professors were astonished at her knowledge, she had to continue her studies privately.

In 1669, Juana entered a convent, where she assembled a large library and devoted herself to writing and to further study. The bishop of Puebla, using “Sor Filotea” as a pseudonym for its author, published a letter Juana had written about a sermon that had been a subject of controversy since 1650, and he criticized her for neglecting her religious duties. Sor (Sister) Juana deftly defended her search for knowledge in an autobiographical essay, Respuesta a Sor Filotea de la Cruz (1691), addressed to the bishop. However, she sold her library, gave the money to the poor, and devoted her last years to a spiritual life. While nursing her sister nuns during an epidemic in Mexico City, she was stricken and died there on April 17, 1695.

Sor Juana’s sonnets and love lyrics are among the finest in the Spanish language. Three volumes of her poetry, prose, and plays were published by her admirers in Spain.