John Lyly; (1554-1606), English author, whose romances created a literary fashion-euphuism—that lasted a decade, and whose comedies formed an important phase in the development of English drama.

The son of a minor ecclesiastical official in Canterbury, Lyly was educated at Oxford (B. A., 1573; M.A., 1575), where he gained a reputation for wit. Failing to secure an academic post, he went to London and won the temporary patronage of the Earl of Oxford. His first work, the prose romance Euphues: The Anatomy of Wit (1578), was a great success. It was followed by a sequel, Euphues and his England (1580), and then by eight elegant comedies, written to be acted at the court of Queen Elizabeth I by the boys of the royal choir.

By impressing the Queen with his talent, Lyly hoped to obtain the important and influential court post of master of the revels. This ambition went unfulfilled. Although several times a member of Parliament, he passed his last years in relative poverty, writing in vain several famous letters to the Queen begging her remembrance of his earlier services. 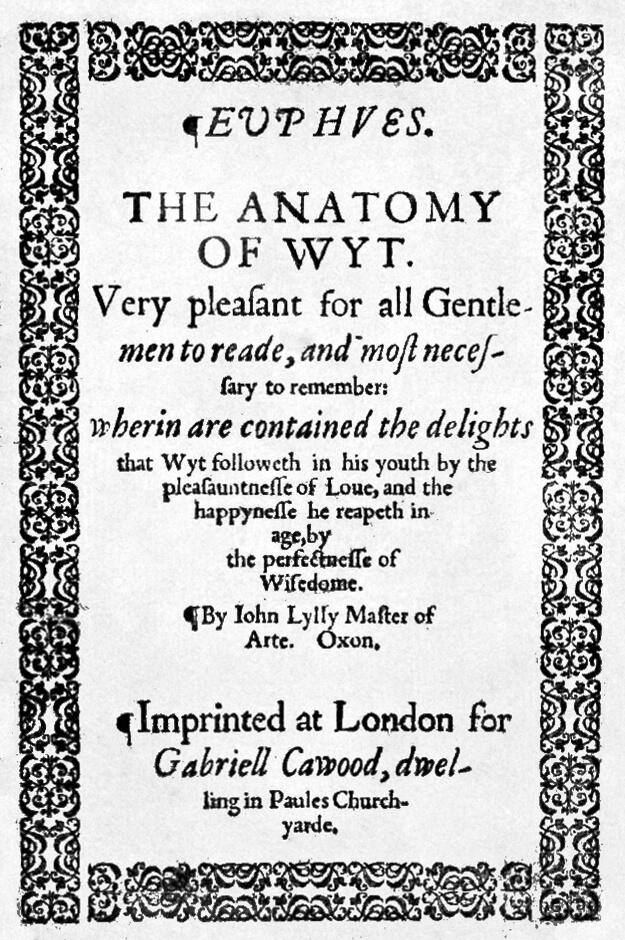 The Euphues romances, both stories of disappointed love, are simple in plot. The events are pegs for lengthy speeches delivered in a highly elaborate prose that came to be called euphuism—a style that was a literary rage for 10 years.

For modern readers, Lyly’s comedies hold much more appeal. The long euphuistic speeches are here broken up into effective stage dialogue and varied by charming songs. The characters include a series of witty lovers and pages that make Lyly the first English writer of high comedy—the founder of a tradition that includes the plays of William Congreve and Oscar Wilde as well as the romantic comedies of Shakespeare.

The plots of the comedies are drawn mostly from classical legend—Alexander and Campaspe —and mythology—Sapho and Phao, Midas, Love’s Metamorphosis, and The Woman in the Moon. Though slight, they are gracefully shaped and deepened by delicate allegorical suggestion. Topical allegory appears in Endimion, where Queen Elizabeth is complimented in the character of Cynthia. Moral and metaphysical allegory is more frequent. Gallathea, for example, pursues a plot of mistaken identity until it brings about reconciliation between the quarreling powers of love (Venus) and chastity (Diana). Here Lyly pursues themes that ally his work with the great allegorical epic, Spenser’s Faerie Queene.