Who is John Dalton? What did John Dalton discover? John Dalton biography, life story, discoveries, works and contributions to science.

John Dalton; (1766-1844), English chemist and physicist, who is best known for developing an atomic theory in which the elements are characterized by different sizes and weights.

Dalton was born at Eaglefield, near Cockermouth, in Cumberland, England, about Sept. 6, 1766. His parents were Quakers, who, although poor, gave their three children something more than the bare rudiments of an education. Dalton was largely self-taught in science.

At the age of 12, Dalton began teaching but was unable to live on the five shillings a week that he earned, and after two years he went into farm work. In 1781 he returned to teaching, joining his brother Jonathan in a school in Kendal run by their cousin George Bewley. When Bewley retired in 1785, Dalton became head of the school and remained in Kendal until 1793. 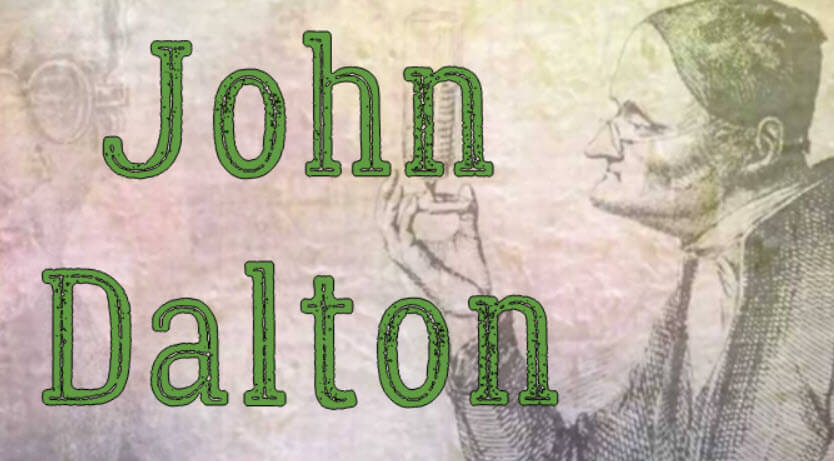 In the spring of 1793, Dalton moved to Manchester where John Gough, a blind natural philosopher, brought Dalton’s scientific knowledge up to date. Largely through Gough’s help, Dalton was offered the position of mathematics and natural philosophy teacher at the New College in Manchester. He remained there until 1799, when the college moved to York. Dalton then tutored in mathematics and chemistry. In 1837 he suffered the first of many strokes. He died in Manchester on July 27, 1844.

Dalton’s earliest essays in science date back to his stay in Kendal. The Gentleman’s Diary and the Ladies’ Diary were two journals in which queries were directed at the readers. In 1783 Dalton submitted a correct solution to a problem in geometry to the former and became a regular contributor on diverse subjects.

In 1794, Dalton was elected a member of the Manchester Literary and Philosophical Society. Many of his important papers appeared in its Memoirs. One Sunday some of his friends remarked on the impropriety of his wearing a scarlet coat to a meeting of the society. Dalton was astounded, for to him the coat was a modest brown. He discovered that he simply could not see red and that he could recognize only blue, purple, and yellow. His first paper in the Memoirs (1798) was the initial scientific account of color blindness. The red-green color blindness that affected Dalton became known as Daltonism.

The atomic theory with which Dalton’s name is associated originated in his meteorological interests. By the 1790’s it was well known that air was not a simple substance, but a mixture of oxygen and nitrogen. The problem this created was described by Dalton in 1801: “Having been long accustomed to make meteorological observations, and to speculate upon the nature and constitution of the atmosphere, it often struck me with wonder how a compound atmosphere, or a mixture of two or more elastic fluids, should constitute apparently a homogeneous mass. …” By the rules of Newtonian physics, the oxygen and nitrogen of the air ought to separate, with the heavier gas, oxygen, settling to the bottom of the atmosphere. Dalton, in 1801, simply assumed that the particles (or atoms) of oxygen and nitrogen were of different weight. The assumption of differing weights was commonplace among the chemists of the day. 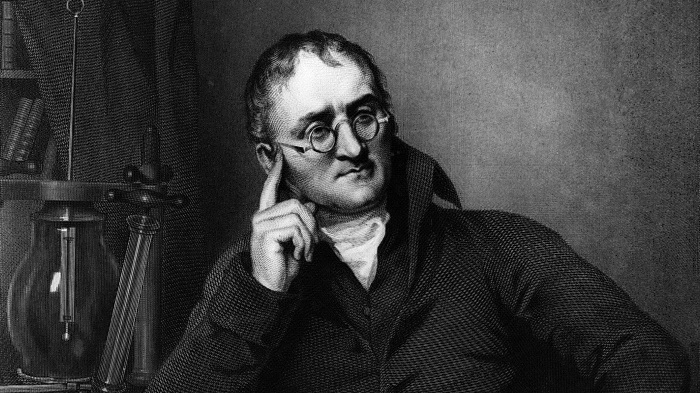 Dalton’s first solution of the problem of homogeneous mixtures of gases was his law of partial pressures. Dalton suggested that particles of a gas repel only their own kind and have no effect on particles of other gases. In a closed container each gas will exert the pressure that it would exert if it alone filled the container. The total pressure will then be the sum of the partial pressures of the constituent gases of the mixture.

In Dalton’s law of partial pressures the differences in the sizes and weights of the particles could be ignored. They could not, however, be ignored for long. In 1801 and 1802, Dalton’s friend William Henry discovered that the volume of a gas that will dissolve in water is independent of the pressure, but the weight of the gas that will dissolve is directly proportional to the pressure. Furthermore, the weights of the various gases in solution differ from one another. It was this fact, known today as Henry’s law, that drew Dalton’s attention back to the atomic weights of gases.

The laws of definite and multiple proportions were just emerging, and Dalton seized upon them for the essential part of his “chemical calculus.” According to the law of definite proportions, elements combine with one another in exactly the same ratio of weights for any given compound. For example, 18 pounds of water always contains 16 pounds of oxygen and 2 pounds of hydrogen. The law of multiple proportions states that when elements combine to form more than one compound, for any given weight of one element the ratio of the weights of the other elements will always be small whole numbers such as 2 to 1 or 3 to 2. For example, 12 pounds of carbon will combine with 16 pounds of oxygen (CO) or with 32 pounds of oxygen (CO2). The ratio of the weight of oxygen in CO to that in CO2 is 1 to 2. 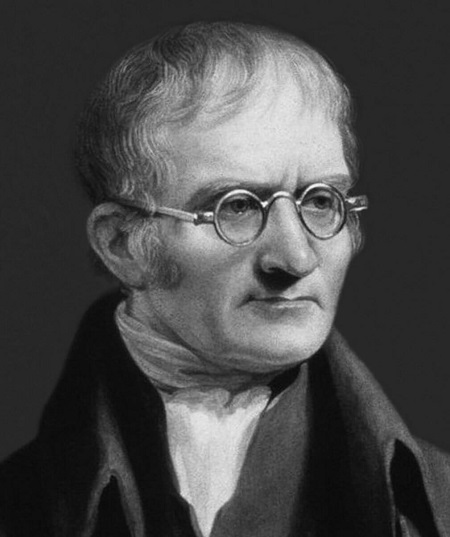 Dalton was convinced that nature works in simple ways. He believed that when only one compound composed of two elements was known, it could be assumed to consist of one atom of each element. When there were two compounds, then one compound was binary (a ratio of 1:1) and the other was ternary (a ratio of 1:2), and so on. From this assumption, relative weights could be computed rather easily. In 1803, Dalton drew up his first table of atomic weights, assigning hydrogen a value of unity. He remarked at the time, “an inquiry into the relative weights of the ultimate particles of bodies is a subject, as far as I know, entirely new.” What was new was the determination of relative weights.

Dalton’s own account of his atomic investigations appeared in A New System of Chemical Philosophy, which appeared in separate parts in 1808, 1810, and 1827. After publication of the first part, Dalton returned to his first principal interest, meteorology, while continuing to defend his atomic theory. He made a few minor chemical discoveries.

Dalton was elected a fellow of the Royal Society in 1822. In 1830 he became one of the eight foreign associates of the French Academy of Sciences.