What is the significance and sumary of Jay’s Treaty? Jay’s Treaty history, terms and background. 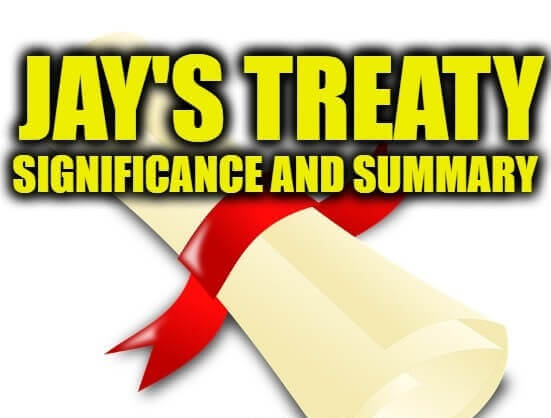 Jay’s Treaty; was a convention between the United States and Britain, concluded on Nov. 19, 1794, by U. S. Chief Justice John Jay and British Foreign Minister Lord Grenville, which settled numerous issues remaining from the treaty of peace ending the American Revolution in 1783. Jay’s Treaty adjusted matters of commerce, frontier posts and boundaries, Indian relations, prewar debts to British creditors, and treatment of returning British Loyalists—all potential sources of conflict. Unpopular in the United States, where anti-Federalists charged “surrender,” the treaty nevertheless preserved Anglo-American amity and confirmed U. S. neutrality in the European wars resulting from the French Revolution.

Long-standing anti-British grievances reached a crisis in the United States in 1794, and there was real danger that the country would become embroiled in a European war. American neutral ships bound for French belligerent ports were being seized according to dictates of arbitrary British orders-in-council, and Britain continued to hold forts in U. S. territory. The British governor-general of Canada made a hostile speech to a delegation of Western Indians from U. S. territory to the effect that they would soon join the king’s warriors against the United States. At the behest of Alexander Hamilton and other Federalist leaders, President George Washington sent Jay, an able and experienced diplomat, to London, where he negotiated the treaty bearing his name. 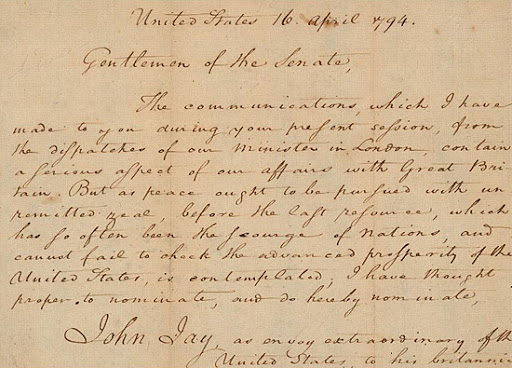 In return for a British promise to evacuate the northern posts by June 1, 1796, the United States acquiesced in the substance, but not the principle, of British naval measures for the duration of the war. Britain agreed to arbitrate U. S. claims for naval spoliations, and the United States agreed to arbitrate claims of British prewar debtors. Provision was made for mixed commissions to settle disputed stretches of the uncertain Canadian-American boundary in the north. (These commissions had no success, except for establishing the identity of the boundary river, the St.-Croix, on the northeastern frontier.) Both parties to the treaty asserted the right of their citizens and subjects to the free navigation of the entire Mississippi River (without mention of Spain, which figured prominently in this territory). Finally, the treaty regulated commerce between Britain proper and the United States without discrimination between British subjects and U. S. citizens.

John Jay conducted these negotiations nominally under instructions from Secretary of State Edmund Randolph, but actually under private injunctions from Secretary of the Treasury Alexander Hamilton; the treaty was really more Hamilton’s treaty than Jay’s. After heated discussion throughout the United States, the Senate, by a bare two-thirds majority of senators present, consented to the treaty on June 24, 1795, and the President, after some hesitation, signed it on August 14. Ratifications were exchanged in London on October 28. The House of Representatives voted the necessary appropriations by a majority of only three votes.

There is little doubt but that Jay’s Treaty saved the peace between Britain and the United States at a juncture vital to the life of the new nation and enabled it to thrive while the European antagonists fell against each other.