Who was Jan Žižka? Information on Bohemian general and Hussite leader Jan Žižka biography, life story. What did Jan Žižka do? 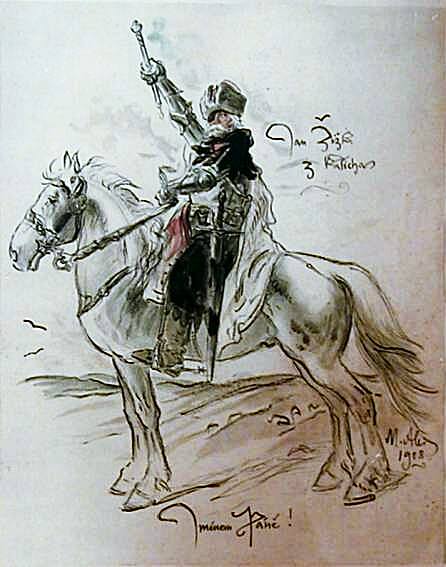 Jan Žižka; Bohemian general and Hussite leader: b. Trocnov, Bohemia, c. 1358/ 1360; d. Pribyslav, Oct. 11, 1424. The name Zizka (One-Eyed) probably was given to him when he lost an eye in childhood. After serving in the feudal bands of various lords, he went to Poland with the army sent by King Wenceslas IV of Bohemia to fight the Teutonic Knights, and distinguished himself in the victory of Tannenberg (1410). On his return he remained at court as one of Wenceslas’ favorites and became an adherent of the church reform advocated, among others, by Jan Hus.

After Wenceslas’ death (1419), the Czechs repudiated Sigismund, the Holy Roman emperor, as heir to the Bohemian throne; but the atmosphere in Prague was conciliatory, and Zizka and his friends left for the more uncompromising city of Plzen (Pilsen). Within a year, he and some 400 fighting men and their families had established themselves on the fortified hill that they called Tabor, and Zizka became the revolutionary military commander of the armed brotherhood of Taborites, who held that the “law of God” must be defended by the sword against its enemies and accordingly assumed the name of “warriors of God”. Zizka proved a resourceful and imaginative military leader. He used wagons with guns mounted on them as mobile defensive strong points and on at least one occasion employed them as tactical offensive vehicles.

In 1420, when Sigismund besieged Prague with a large army, Zizka, with a much smaller force, occupied the heights called Vitkov and defended them so successfully that Sigismund withdrew without attempting to take the city; since then, the heights have been known as Zizkov. Zizka continued to campaign, although he was nearly or totally blind after being wounded in his remaining eye at the siege of the castle of Rabi in 1421. He defeated Sigismund at Plzen and early in January 1422 at Kutna Hora and Nemecky Brod.

In 1423 there occurred a break between Zizka and the Taborites for reasons still variously explained, and he took command of another center of radical Hussitism in eastern Bohemia around Hradec Kralove, but known from its mountain fortification as Horeb. In the civil wars that followed, Zizka won several victories, notably at Malesov (June 7, 1424), over the Prague party. He died of the bubonic plague at the castle of Pribyslav and was buried at Hradec Kralove, but when his forces, which assumed the name of Orphans, lost control of that city, his relics were transferred to Caslav.