James Cook; (1728-1779), British naval officer, who more than any other navigator added to man’s knowledge of the southern Pacific Ocean and the coasts of North America. He was born on Oct. 27, 1728 at Marton-in-Cleveland near Whitby, Yorkshire, England. After a limited education he was apprenticed to a storekeeper at Staithes. In July 1746 he took up an apprenticeship with Walker Brothers, shipowners at Whitby. Cook joined the British Navy as an able-bodied seaman in June 1755 and rose rapidly in rank during the Seven Years’ War with France. As a navigator for the British fleet he surveyed the St. Lawrence River and played an important role in the capture of Quebec. 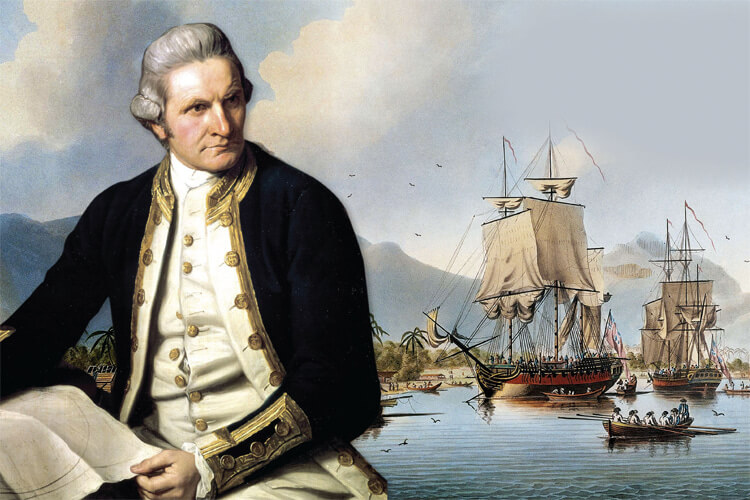 After the fall of Quebec in 1759, Cook became master of the flagship Northumberland and spent the summers from 1763 to 1767 surveying the coast of Newfoundland. His observations of a solar eclipse in 1766 were the basis of an accurate calculation of the longitude of Newfoundland and attracted the attention of the Royal Society.

In 1768 Cook was made a first lieutenant and appointed commander of an expedition to Tahiti, on behalf of the Royal Society, to observe the transit of Venus between the earth and the sun. Secret orders from the British Admiralty directed him to seek new lands in the southern Pacific Ocean between New Zealand and Chile. He sailed from Plymouth in the Endeavour on Aug. 26, 1768. Among the 94 persons on board were 11 members of a scientific party, including the botanist Joseph Banks.

The Endeavour rounded Cape Horn to Tahiti, where observations of the passage of Venus across the solar disk were made in June 1769. Cook then sailed south to about latitude 40° S and westward to New Zealand, where he went ashore at Poverty Bay in October 1769. For the next six months he surveyed the coasts of New Zealand. On April 20,1770, Cook reached the unexplored east coast of Australia, which he named New South Wales.

He anchored in Botany Bay, where Banks studied the unusual plant life. Sailing northward along the coast, the Endeavour passed inside the Great Barrier Reef and nearly met disaster when dashed onto the coral. After makeshift repairs, Cook moved along the east coast of Queensland, He claimed possession of the east coast of Australia in the name of King George III on Aug. 23, 1770. Discovering a passage between Australia and New Guinea, Cook reached Batavia, in Java, in October. The Endeavour was repaired with the assistance of the Dutch, but malaria and dysentery, contracted during the 3-month stay, killed 30 men before the ship returned to England in July 1771.

Almost immediately, Cook began to prepare for a second expedition to explore the southern oceans as near to the South Pole as possible in search of a continental land-mass. On July 13, 1772, he sailed as captain of the Resolution in company with the Adventure under Tobias Furneaux. The ships made for the Cape of Good Hope and traversed the southern Indian Ocean, crossing the Antarctic Circle in January 1773. After a rendezvous in Queen Charlotte Sound, New Zealand, in May 1773, the expedition moved eastward and then north to Tahiti for relief from cold and replenishment of supplies. Turning again to New Zealand, Cook lost contact with the Adventure at the end of October and missed it at the intended rendezvous in Queen Charlotte Sound. Furneaux subsequently sailed the Adventure to England, becoming the first to circumnavigate the world from west to east.

Cook continued his search for a southern continent. He sailed eastward from New Zealand, again crossed the Antarctic Circle, and called at Easter Island, Tahiti, and Tonga on his way to the New Hebrides. In October 1774, he was back in Queen Charlotte Sound, having discovered New Caledonia and Norfolk Island. He again sailed the South Pacific at high latitudes, and finished his voyage by skirting the southern limits of the Atlantic to the Cape of Good Hope. He returned to England in July 1775. 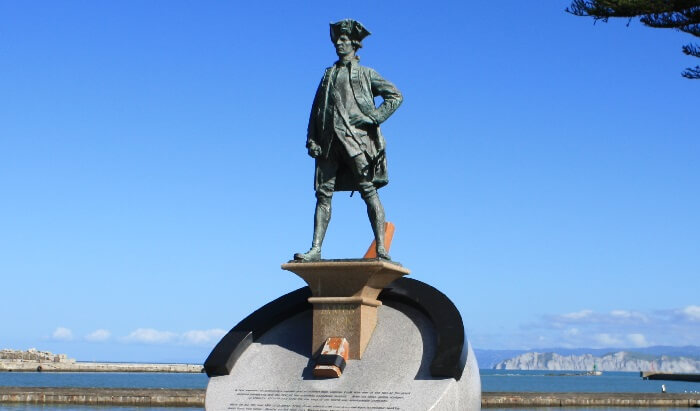 In July 1776 he set out in the Resolution on his third and final Pacific voyage. A second ship, the Discovery, commanded by Charles Clerke, joined the Resolution at the Cape of Good Hope. By December 1777 the ships had revisited New Zealand, Tonga, and Tahiti. In January 1778, Cook discovered and named the Sandwich (Hawaiian) Islands. From Hawaii he sailed to the coast of North America, which he followed through Bering Strait and into the Arctic.

Late in 1778 the ships returned to the Hawaiian Islands, where Cook was slain by natives at Kealakekua Bay on ‘Feb. 14, 1779, during a dispute over the theft of a boat from the Discovery. His officers recovered his mutilated remains and buried them at sea. After another unsuccessful attempt to find a northwest passage north of Bering Strait, the Resolution and Discovery returned to England, first under the command of Clerke and then when he died of tuberculosis, under James Gore. Cook’s journal of the third voyage was completed by one of his officers, James King.

Minor indictments against Cook’s character and unfounded charges that he was incompetent in dealing with natives have failed to diminish his standing as the greatest British explorer. He was the first navigator to apply scientific method to exploration. On his first voyage he charted the coast of New Zealand and discovered the east coast of Australia, thus laying the foundations for settlement of two great British colonies at a time when the American colonies were in revolt.

His second voyage revised the cartography of the mythical southern continent, shrinking it to within the Antarctic Circle. In two broad sweeps of the Pacific Ocean he made important island discoveries and reported at length on the native peoples. Of great significance to the sciences of geography and navigation was his successful use of the chronometer designed by John Harrison for rapid determination of longitude. By persistent use of antiscorbutic foods, such as sauerkraut, he demonstrated their value in the prevention of scurvy on long voyages. In recognition of his work in nautical medicine the Royal Society awarded him its highest distinction, the Copley gold medal.

On his last expedition Cook discovered the strategically important Hawaiian Islands, charted parts of the North American Pacific coast, and showed that a northwest passage to the Atlantic did not exist south of the Arctic. Cook’s character and contributions to scientific exploration are aptly summarized in the names of his ships: Endeavour, Resolution, Adventure, and Discovery.