Jacopo Tintoretto; (1518-1594), Italian painter of the Venetian school, whose dramatically lit, motion-filled canvases make him one of the leading figures of the late Renaissance.

Tintoretto was born Jacopo Robusti in Venice. Recause his father was a dyer he was nicknamed Tintoretto, Italian for “little dyer.” There is no proof for the traditional view that he was a pupil of Titian. Ry 1539, Tintoretto was inscribed in the lists of the Venetian painters’ guild, and his earliest extant work is dated 1540. He established his reputation in 1548 with his exciting composition of St. Mark Rescuing the Slave (Accademia, Venice).

From then on Tintoretto remained, after Titian, the leading artist in Venice, competing with the master himself and eventually succeeding him as official painter to the republic. He headed an extremely active workshop, in which, as customary, his chief assistants were members of his own family—his sons Domenico and Marco and his daughter Marietta. He died in Venice on May 31, 1594. 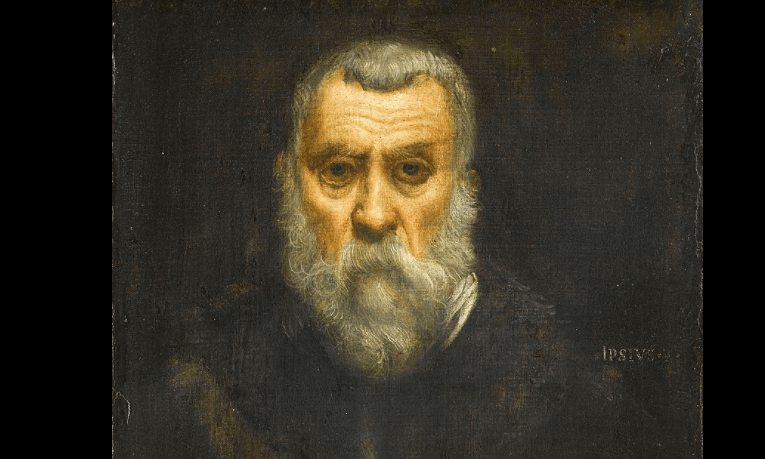 Most of Tintoretto’s work was done for Venetian patrons, and the best of it is still in his native city. For the state he created the decorative cycles in the Ducal Palace, which depict historical events or votive subjects. Since fresco suffered in the humid climate of Venice, Tintoretto worked usually in oil on canvas. The Coronation of the Virgin, or Paradise (c. 1588), is one of the largest paintings ever executed on canvas.

The Scuola di San Rocco, an extremely rich Venetian confraternity, houses more than 50 monumental canvases by Tintoretto. Ranging in date from 1564 to 1588 and decorating three major rooms, they comprise a continuous pictorial cycle, devoted mainly to scenes of the Virgin and of Christ, as well as of Old Testament prototypes. In 1564, by somewhat devious means, Tintoretto captured the original commission, a ceiling painting of the Apotheosis of St. Roch. In a competition for the work he entered a finished picture rather than the requested sketch and then presented it to the confraternity as a gift. Consequently, he was awarded the task of decorating the rest of the building and given membership in the confraternity. He succeeded in transforming the building into a monument to himself and his art.

Tintoretto is the first artist credited with synthesizing the design of Michelangelo and the coloring of Titian, a critical formula for success calculated to resolve the obvious distinctions between the two artistic giants of the 16th century. His art was infused with an unusual physical excitement, a constant movement and tension. Figures are set into motion at angles to the plane of the canvas, moving in and out of the picture in counterpoint to one another, as in St. Mark Rescuing the Slave. A major source of inspiration for this figural dialectic was the work of Michelangelo. Tintoretto frequently drew from small copies of that master’s sculpture. Ry significantly selecting unusual views, however, he violated, in effect, Michelangelo’s aesthetic principles.

In adapting the free handling of the brush in applying color, which had become part of Venetian tradition, Tintoretto also assumed a radical stance. To Titian’s style, in which solid forms were suggested by loosely juxtaposed patches of paint, Tintoretto added an element of deliberate speed and action—his long brushstrokes are rarely broad patches of color but have a direction and velocity. The very processes of paint application, the gestures themselves, often seem to be recorded on the surface of his pictures. For this technique his non-Venetian contemporaries harshly criticized his work as sloppily executed and an insult to art.

Tintoretto’s mature style depends for its overall compositional unity on this quality of brush-work, as well as on an apparently arbitrary and highly imaginative distribution of tonal values. Only parts of his solid forms are actually illuminated, and these fragmented members, so to speak, are related to one another as parts of the overall design of the composition. This active surface pattern of lights and darks operates in tension with the spatial thrusts of the pictorial illusion. Such powerful dramatic effects, accented by long highlights, are among Tintoretto’s most influential contributions to later styles in painting.