J. Robert Oppenheimer; (1904—1967), American physicist, who made major contributions both in theoretical physics and in the education of physicists and nonphysicists. His eloquent popular lectures, published under the titles Science and the Common Understanding, The Open Mind, and The Flying Trapeze: Three Crises for Physicists, give a sense of the dignity and joy of science and of its relevance to philosophy and ethics.

His career can be divided into three parts: a pre-World War II career as a pure scientist, a wartime career as the director of the Los Alamos Laboratory, and a postwar career, which was clouded by his loss of security clearance in 1954. During the last period he divided his time between heading the Institute for Advanced Study in Princeton (he became director in 1947) and, until losing his security clearance in 1954, acting as an influential governmental adviser. 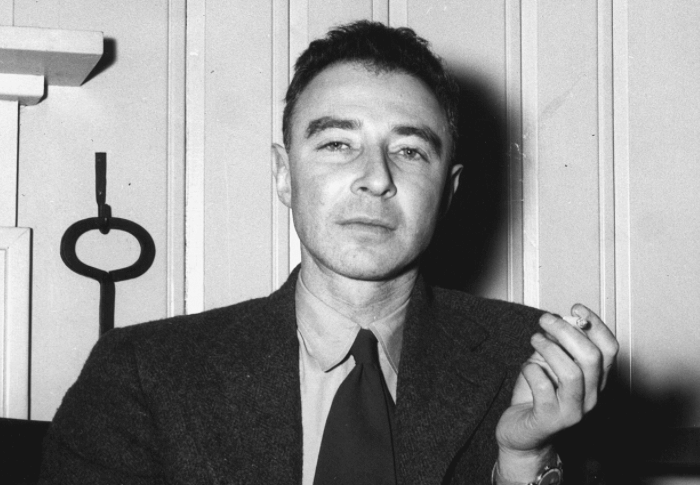 Oppenheimer was born in New York City on April 22, 1904. His scientific career began when he was a student at Harvard, which he entered in 1925 and from which he graduated three years later. He was an extraordinary student in both physics and the humanities. He went to Europe to do his graduate work, since there was no American school of theoretical physics of any consequence.

In 1927, Oppenheimer took his doctorate at Göttingen, in Germany, under the direction of the celebrated German theoretical physicist Max Born. At this time Born and Oppenheimer wrote a basic paper on the quantum theory of molecules. During this period Oppenheimer came to know well all of the inventors of the quantum theory, which, along with the theory of relativity, ranks as the major discovery in physics in the 20th century. In 1928 and 1929 in Zürich he worked with Wolfgang Pauli, one of the architects of the quantum theory, and his interests shifted from molecular physics to more basic problems in the structure of matter. In 1930, Oppenheimer made one of his most significant scientific contributions by clarifying the concept of “antiparticle,” which had been introduced into quantum theory by the English physicist P. A. M. Dirac shortly before. Oppenheimer proved that particles and antiparticles must have the same mass; soon after, an anti-electron (the positron) with the same mass as the electron was discovered.

By this time, Oppenheimer had returned to the United States. As a professor of physics at both the University of California, Berkeley, and the California Institute of Technology, he founded the first major prewar school of theoretical physics in the country.

Los Alamos and “The Oppenheimer Case.”

Because of both his remarkable personality and his work in nuclear physics, Oppenheimer was the natural choice to direct the atomic bomb project at Los Alamos, and he became its director in 1943. For many physicists and for Oppenheimer as well, World War II meant a sudden political coming of age. Before the war Oppenheimer did not have much interest in politics, and such interest as he had was aroused by the effect of the Depression on his students. While he never became involved in any organized movements, many of his friends and colleagues of this period belonged to the sort of liberal, left-wing, groups that were popular in the 1930’s, and some joined the Communist party itself.

All of this was well known to the military authorities who appointed Oppenheimer as director at Los Alamos, and much of the bitterness that surrounded the “Oppenheimer case” in 1954 was a result of the feeling by the scientific community that Oppenheimer was being branded a security risk in 1954 for exactly the same associations that had been acceptable in 1943, when Oppenheimer’s services were used in the construction of the atomic bomb.

At no time was Oppenheimer’s loyalty to his country called into question. He was a superb director at Los Alamos. Throughout his life he had an incredibly quick grasp of the most complicated technical arguments. Often he seemed able to see through an argument to its end almost from the first sentence. He was able to synthesize and summarize different points of view, and at Los Alamos he had a total, detailed grasp of every aspect of the project.

Even before the explosion of the first bomb, it was clear to the physicists at Los Alamos that a new force was about to be introduced into the world and it would require extraordinary diplomatic skill to keep it in check. The Los Alamos scientists, with Oppenheimer playing a leading role, began an emergency campaign to educate the citizenry, both in and out of government, as to the dangers and opportunities of nuclear energy. Oppenheimer was chairman of the General Advisory Committee to the Atomic Energy Commission from 1947 to 1953. He participated in a number of controversial decisions, especially with respect to the hydrogen bomb, which he felt, for both technical and humanitarian reasons, should not have been built. He was overruled by President Truman in 1949.

In 1954 Oppenheimer was relieved of his various advisory posts and his security clearance was removed. This action which apparently stemmed from both his past associations and his decisions with regard to the hydrogen bomb, was reviewed both by a special board and by tie Atomic Energy Commission itself, and in split decision both ruled that, while Oppenheimer’s loyalty was not in question, he was nevertheless a security risk.

There is little doubt that the last part of Oppenheimer’s life contains an element of tragedy. Although he was known as “the father of the bomb,” a sobriquet that he detested, his abiding interest was in the peaceful application of nuclear energy. And just when he might have contributed to this development, he was shut off from the government by the loss of his security clearance.

In 1947, Oppenheimer went to the Institute for Advanced Study as its director, and he remained at Princeton until his death there on Feb. 18, 1967. Here too he exhibited remarkable qualities as a teacher. Young physicists from all over the world flocked to Princeton to spend a year or two at the institute and found an atmosphere that reflected Oppenheimer’s broad interest in culture, his personal elegance, and his high tolerance for the unconventional. Oppenheimer’s own interest in physics at this time was in the theory of elementary particles, and the elementary particle seminars at Princeton under his direction were famous throughout the scientific community for their lively critical spirit and for the ideas that they produced.

In summarizing Oppenheimer’s life and work, one may conclude that his legacy is probably reflected most brilliantly in the institutions that he founded and the students that he produced. He brought theoretical physics to the United States and founded the first great school of theoretical physics here. For better or worse, he built and developed Los Alamos, the first laboratory devoted to the military use of nuclear energy. At Princeton he left a flourishing scientific and intellectual establishment. No American physicist has been uninfluenced by Oppenheimer’s work, and most American theoretical physicists can trace their scientific genealogy, through their teachers, back to Oppenheimer and his school.