In Ivan Pavlov’s laboratory in Russia, you would have seen a dog acting very strangely indeed. The moment a bell was rung, the dog began to salivate. (Saliva flowed in his mouth, much as it does in yours when you see or smell a very inviting meal.) He acted just as if he were going to be fed. Normally, a dog’s mouth doesn’t water when he hears a bell, This response must have been acquired or learned. In fact, some of Pavlov’s dogs would salivate at the sound of a bell, others at the lowering of a white square or a ftash of light. How did they acquire this behavior?

Pavlov knew that every time a dog saw food he salivated. Pavlov first rang a bell, then he gave the dog food. In other words, the dog was presented with two stimuli at once, food and the sound of a bell. After a few weeks, when the bell alone was rung in the absence of food, the dog responded to the bell as if he were responding to food. He salivated. Apparently a substitute stimulus, the so und of the bell, now had the same effect as the original stimulus, the smell or sight of food. 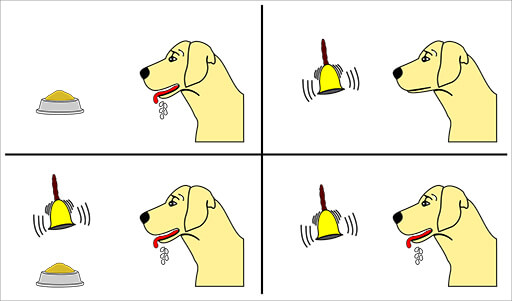 In the nervous system, connections had been made between nerve cells so that the salivating response was given not only to the sight and smell of food but alsa to a new stimulus. The dog’s inherited behavior had been changed.

In much the same way, a dog learns to give a new response to an old stimulus. For instance, hunting dogs on farms sometimes hunt and kill chickens. How would you train the dog to leave chickens alone? Same farmers tie a chicken which the dog has killed around his neek with wire. Soon the chicken begins to decay and smell with a very foul odor. In the dog’s nervous system, the stimulus “chicken” may be associated with the stimulus “foul odor.” Or the stimulus “chicken” may have become associated with the stimulus “harsh words” given by the dog’s master. Thus, the dog is trained, and learns to leave chickens alone.

The act of salivation is a reflex. The stimulus, food, causes an impulse to travel along an inborn nerve pathway. The substitute stimulus, the ringing of the bell, is given simultaneously with the old stimulus. In this way it is associated or connected with the inborn nerve pathway. For a period of time, the new stimulus is given with the old, the two are connected, and produce the same response. Eventually, the new stimulus alone produces the desired response, it is as if the animal had acquired a new reflex. Pavlov called this acquired reflex a conditioned reflex.

Notice the part that reward and punishment played in this formatian of a eonditioned reflex. Eaeh time Pavlov’s dog heard the bell, he alsa received food which he liked (reward). Each time our farmer’s dog saw the chicken tied to his neek, he smelled a foul adar which he disliked (punishment). Pavlov found that after his dogs had learned to salivate on hearing a bell, he could break the conditioned reflex. He did it this way. When the bell was rung, the dog salivated. But he was not given food (his reward). This was repeated each time the dog reacted to the bell. After a while, the dog no longer salivated on hearing the bell. His conditioned reflex had been broken. Later you will learn how a reward or punishment given at the proper time may be of use to you in learning. 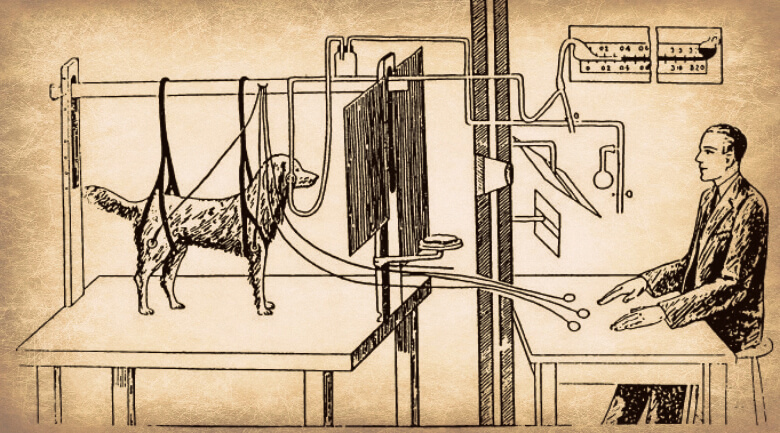 You can use Pavlov’s conditioned reflex to teach your dog different kinds of behavior. Suppose you want your dog to learn to sit up. Each time you give him his food or something he likes, say, “Sit up” and make the dog sit up. The stimulus, food, and the sound of the words “sit up” (and the position of his body) will be associated in the nervous system. Soon the dog will sit up when you say, “Sit up.” Be sure when he does this to reward him, pet him, or give him something he likes. You needn’t do it eaeh time, but do it often enough so that the learned behavior is fixed; that is, make sure that the stimulus and response have been associated in the nervous system through conditioning.