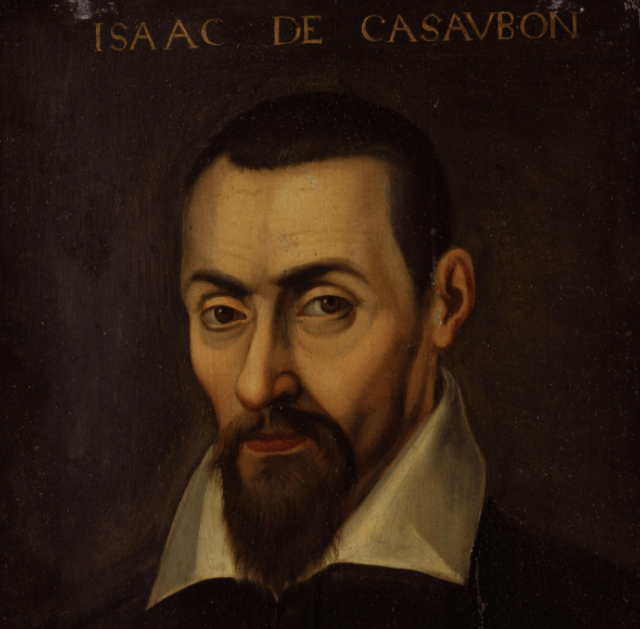 Isaac Casaubon; (1559-1614), Swiss classical scholar. The son of a French Huguenot minister in exile, Casaubon was born in Geneva, Switzerland, in 1559. His promising work as a classical scholar at the Academy of Geneva brought him an appointment to teach Greek there, and he became widely acquainted with the refugees, scholars, and visitors who were drawn to this center of Calvinism in Switzerland. In 1596, after the Edict of Nantes guaranteed civil rights and a limited freedom of worship to French Protestants, Casaubon accepted a post in France at the University of Montpellier. Presented to King Henry IV by Roman Catholic friends who were eager for Casaubon’s conversion, he was given the post of sublibrarian in 1604 at the royal library in Paris. Within a few years his reputation as a scholar had spread throughout northern Europe.

Through his studies of early Christian theology, Casaubon became disenchanted with Calvinist principles of faith and order. He found himself attracted to the doctrines and policies of the church in England. When the death of Henry IV heightened religious tensions in France, Casaubon accepted the invitation of Richard Bancroft, archbishop of Canterbury, to move to England. Warmly welcomed by King James I, and by Launcelot Andrewes and other English bishops, Casaubon was granted a royal pension, and though a layman, he was given the income of a canonry in Canterbury. In 1611 he became a naturalized English subject. His last few years were devoted chiefly to pamphleteering controversy, defending the English Church from Roman Catholic attacks. One of his tasks was the preparation of the refutation of the Annals of the historian Baronius, largely anti-Protestant history of the Christian church. Casaubon died in London on July 12, 1614, and was buried in Westminster Abbey.

Isaac Casaubon’s editions of the works of classical writers are more important than his ecclesiastical polemics. He published commentaries on Suetonius, Theophrastus, Athenaeus, and others. His edition of Polybius was left unfinished. A valuable record of the life of his times is contained in his diary, Ephemerides, which was; printed for the first time in 1850. Many of his notes and papers were collected and preserved by his son, Méric Casaubon.