Swallow; any of a large family of small insect-eating birds that feed on the wing. Swallows are found throughout the world except for the polar areas, New Zealand, and some oceanic islands. Certain species of swallows are sometimes known as martins, and some confusion sometimes results from the interchangeable use of the two names. For example, the bank swallow (Riparia riparia) of North America is also found in Europe, where it is known as the sand martin. In North America, the term martin is reserved for a large species of swallow—the purple martin (Progne subis). The best known swallow is the cosmopolitan Hirundo rustica, called the swallow by the British, the chimney swallow by the Germans and French, and the barn swallow in the United States and Canada.

Swallows are well liked for their friendly, twittering song. They figure in many legends and are often considered to herald spring. Their insect-eating habits also benefit man. 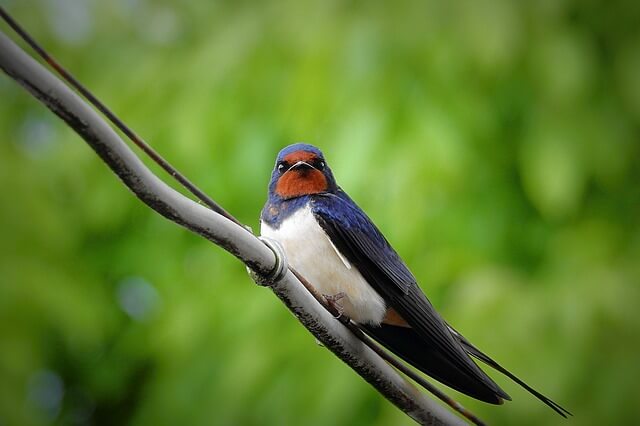 Swallows are 3 3/4 to 9 inches (10-23 cm) long. The body is slender and sleek, with a short neck, the tail often long and forked, and the wings long and pointed. The bill is small and triangular, but the mouth is large and has bristles that help form an effective aerial insect scoop. Their plumage is compact and often has a metallic sheen. Swallows may be black or shades of brown, chestnut, metallic greens, and blues, and they often have patches of white. The sexes look alike in most species.

Swallows spend most of their time on the wing, and although they are graceful and fast in flight they are no match for the faster swifts, with which they are often confused but are not related. They perch readily but seldom walk, as their legs are very short. They are migratory. They feed entirely on insects, and are dependent on the presence of insects in the air, which is, in turn, dependent on a warm temperature. When swallows are caught by unexpected cold weather, they eat bayberries.

Most swallow species are colonial, with large nesting colonies often numbering hundreds of pairs. Some are semicolonial, and still others are solitary. Swallows differ widely in the types of nests they construct. The most elaborate nests are intricately engineered structures made of hundreds of small mud balls plastered together. The female alone usually constructs the nest, but the male forms the small mud balls with his bill and carries them to the nest site in his mouth. The nest may consist of an open cup attached to a vertical surface or an elaborate retort-shaped nest attached to both a vertical and an overhead horizontal surface. The nest entrance is usually just large enough to permit the bird to enter. The mud shell of the nest is reinforced with grass, and the nest is lined with fine grasses and feathers.

Other swallows, such as the tree swallow (Iridoprocne bicolor) of North America, are cavity-nesters, using natural cavitics in trees or abandoned woodpecker holes. They usually line the cavities with grass and feathers. A third type of nest builder is the burrow-nester, such as the bank swallow (Riparia riparia) which excavates nest holes 24 to 48 inches (61-122 cm) deep into sand banks. A crude nest of grass stems is made at the inner end of the burrow, and feathers are added as the eggs are laid.

There are about 75 species of swallows classified in many genera making up the family Hirundinidae, order Passeriformes.