Sumerian Culture; In its heyday Sumer consisted of more than a dozen city-states. Each was a walled city surrounded by numerous villages and hamlets.

Sumerian cities had from 10,000 to 50,000 inhabitants. Their streets were narrow and winding, without paving or drainage. Traffic moved either on foot or by donkey.

The outstanding feature of each city was the temple, situated on a high terrace and enclosing a high tower, known as a ziggurat. Its central room, or cella, had a niche for the god’s statue as well as an offering table and was surrounded by rooms for the use of the priests. The temple’s outer walls were built largely of mud brick. The columns of its courts and porticos were resplendent with colored geometric patterns composed of the painted heads of innumerable clay cones inserted in them. The shrine was at times decorated with wall paintings.

The average house was a small one-story mud brick structure with several rooms around an open court. -There were also larger, two-story houses, the ground floor of which contained a reception room, kitchen, lavatory, servant quarters, and, sometimes, a private chapel. 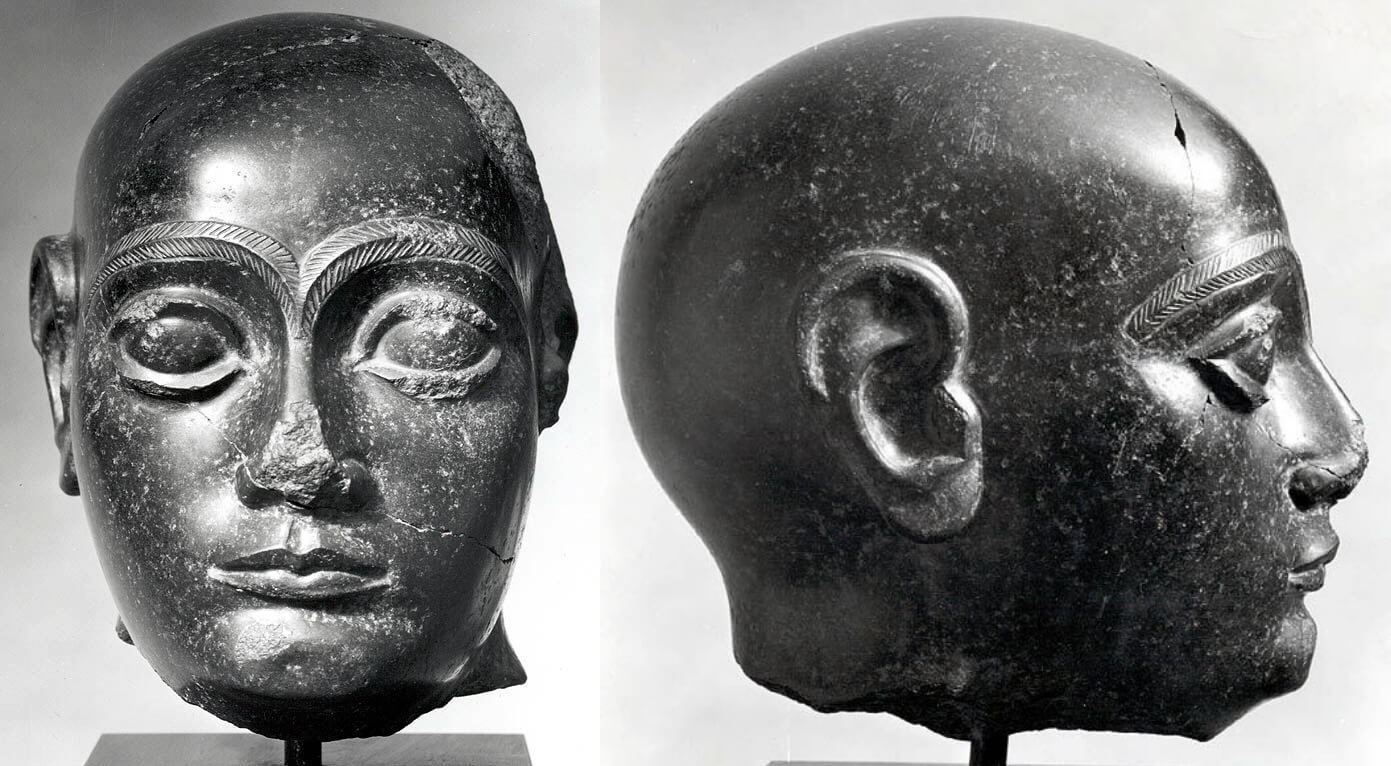 Furniture consisted of low tables, stools and high-backed chairs, and beds with wooden frames. The household pots and pans had various shapes and were made of clay, stone, copper, or bronze. Baskets and chests were made of reed and wood. Floors and walls were adorned with reed mats, skin rugs, and woolen hangings. Below the house might be the family mausoleum, where the dead were buried with some of their belongings for use in the Nether World.

In theory the entire city belonged to the god to whom it had been assigned on the day the world was created. In practice, however, most of the land belonged not to the temple but to the citizens—farmers and cattle breeders, boatmen and fishermen, merchants and scribes, artisans and craftsmen. Political power originally lay in their hands, and the city governor was no more than a peer among peers.

As the danger of attack by the surrounding peoples increased, kingship came into being, and the king acquired paramount importance. The Sumerian ruler was a vicar of the gods. His duties were to defend the land from its enemies and enlarge its territory and influence, to improve the irrigation system so essential to its prosperity, to build and repair roads, and to preserve law and justice.

The basic unit of Sumerian society was the family, and marriages were arranged by parents. The betrothal became legal as soon as the groom presented a bridal gift to the father. A wife could hold property, engage in business, and qualify as a witness. But she might be divorced on light grounds, or, if she should have no children, the husband could take a second wife. Children were under the absolute authority of their parents and could even be sold into slavery.

Slaves, originally prisoners of war or impoverished fellow citizens, could be flogged and branded. But they could engage in business, borrow money, buy their freedom, and marry a free person, thus ensuring the freedom of their children.

Some of Sumer’s most far-reach-ing achievements involved irrigation and agriculture. Engineers constructed intricate systems of canals, dikes, weirs, and reservoirs, and they used leveling instruments, measuring rods, and maps in preparing plans and surveys. Their arithmetic was based on the number 60 rather than 10 and had a form of place notation. Measures were standardized.

Farming developed into a complex, systematized technique. Farmer almanacs were prepared and used as texts in Sumerian schools. Sumerian craftsmen were skilled in metallurgy, fulling, bleaching, dyeing, and preparing paints, pigments, cosmetics, and perfumes. The Sumerian physician made use of an assortment of botanical, zoological, and mineralogical ingredients as materia mecLica in his prescriptions.

The Sumerians worshiped a pantheon of gods of diverse rank and character. The four leading deities were An (Heaven), Ki (Earth), Enlil (Lord Air), and Enki (Lord of the Deep). Ranking lower in the hierarchy were the gods in charge of the sun, moon, stars, and planets, and of wind, rain and tempest. In addition, there were many lesser deities in charge of the numerous natural and cultural phenomena that constitute the cosmos. The great gods’ chief instrument of creation was the divine word, which once pronounced could not be altered. The me, or universal laws that even the gods had to obey, kept the universe in continuous, harmonious operation.

The Sumerian believed that man had been fashioned of clay and created solely to provide the gods with food and shelter. Ignorant of his destiny and haunted by insecurity, he sought salvation by praying to his personal god, a kind of good angel. In death, the ghostlike spirit descended to the Nether World, where existence was a dismal reflection of life on earth.

Prayers, offerings, and sacrifices were rendered to the gods at the temple, which had a large priestly personnel. The most joyous festival was the prolonged New Year celebration, which culminated in a sacred marriage—actually a fertility rite—between the king, in the role of the god Dumuzi, and Inanna, goddess of love and procreation.

The gods of Sumer resembled men in appearance and behavior, and a rich mythology concerned their deeds and misdeeds. One of the most striking myths is about the god Enlil and his beloved, Ninlil. She followed him to the Nether World, to which he had been banished by the other gods. Several myths concern Enki, the divine culture hero, who brought civilization to mankind and saved man from destruction by the Flood, but who almost suffered death after eating the forbidden plants of Dilmun, the paradise of the gods. The deity that most inspired poets was Inanna, the ambitious and cruel but not unattractive goddess who descended to the Nether World in disregard of the divine laws. She reascended to the earth only after her husband, Dumuzi, took her place in the “Land of No Return “—hence the wailing for Dumuzi prevalent throughout the ancient Middle East.

Religion inspired much of Sumerian art, such as temple statues, plaques, friezes, decorative inlays, and engraved cylinder seals. The sculptors modeled the temple statues in both abstract and naturalistic styles. Men were bearded or clean-shaven and wore a flounced skirt, sometimes covered by a long cloak, or a long shirt with a fringed shawl wrapped over it. Women had pigtails wound about the head and wore long tufted dresses that left the right arm bare.

Music, too, was largely temple-inspired, but song accompanied by instrumental music also resounded in the palace during feasts and celebrations. Beautifully constructed harps and lyres have been recovered from the royal tombs. 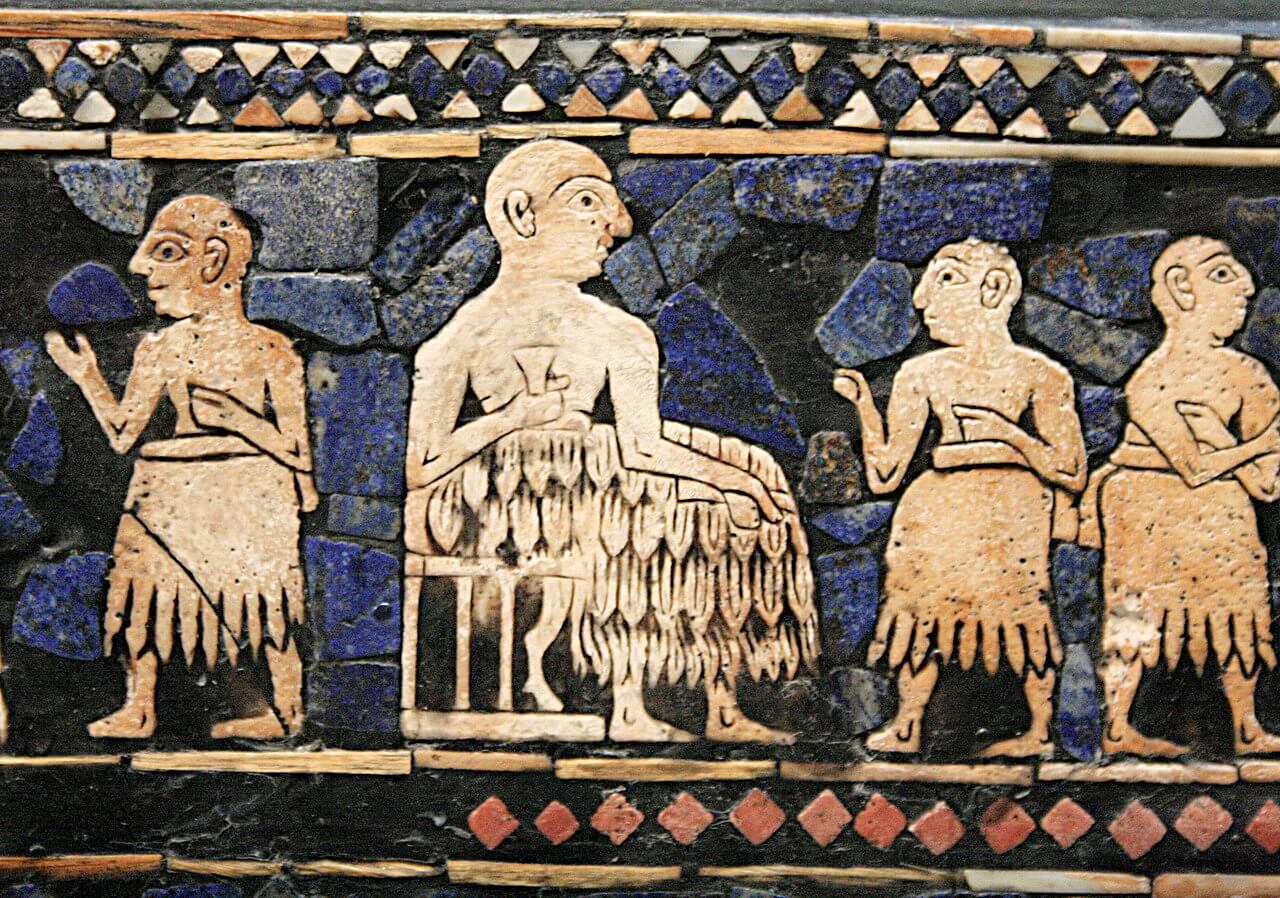 Of thousands of Sumerian clay tablets that have been recovered, the majority are administrative, legal, and economic documents. About 5,000, however, are Sumerian literary works, such as myths, epics, hymns, laments, proverbs, precepts, fables, dialogues, and disputations.

Sumerian was an agglutinative language, resembling Turkish and Hungarian in some of its structural and grammatical features. The most important Sumerian contribution to civilization was the development of the cuneiform system of writing this language. Later, other languages also were written in cuneiform.

The writing, which was done on clay tablets, originated about 3000 b. c. with a series of picto-graphic signs devised by Sumerian temple administrators for the purpose of keeping their accounts. It was used at first only to inscribe the simplest memoranda and notations. Over the centuries, however, it became a phonetic system of writing in which each sign stood for one or more syllables. See also Cuneiform.

Learning to read and write the complex cuneiform syllabary required years of attendance at the Sumerian school, called the “tablet-house.” The head of the school was the “school father,” the professor was known as the “expert,” and assistants were “big brothers.” The students, or “school sons,” came from well-to-do families, but the tuition was probably minimal.

Teaching methods were dull and uninspiring. Discipline was harsh, and “drop-outs” were numerous. The curriculum consisted primarily of copying and memorizing long lists of words and phrases. Other major subjects were mathematics and literature.

A psychological drive for power and prestige colored the Sumerian character and was responsible in large part for the civil and foreign wars that finally destroyed Sumerian political power. Polarized into poor and rich and weak and strong, Sumerian society professed such ideals as justice, equity, and compassion, but injustice, inequity, and oppression abounded. The short-sighted Sumerians upset nature’s delicate ecological balance by overirrigating their fields and orchards and thus “salted” and “silted” them into sterility. There is evidence also that Sumer suffered from cheating merchants and the “generation gap” between parents and children, teachers and students.

Despite these failings and shortcomings, Sumer dominated the ancient world spiritually and culturally for more than a millennium. Observant, reflective, and pragmatic, the Sumerians evolved a way of life that struck a balance between reason and fancy, freedom and authority. As a consequence, they made outstanding technological and ideological breakthroughs.

The Legacy of Sumer:

It is now generally agreed that Sumer was in some respects the cradle of civilization. Among the Sumerian contributions to human development are such technological devices as the potter’s wheel, the wheeled vehicle, the sailboat, and the seed plow. Sumerian temples and ziggurats are architectural prototypes of the synagogue, church, and mosque. The Sumerians were the first to develop a system of writing. The first coherent musical system centering on a diatonic scale can also be traced back to Sumferian sources. The city-state originated in Sumer, and Sumerian written law is the forerunner of Biblical, Greek, and Roman law. The division of the circle into 360 degrees and of the hour into 60 minutes of 60 seconds goes back to the Sumerian sexagesimal (base 60) system of numbers.

Judaeo-Christian ideas about the creation of the universe and man, the creative power of the divine Word, the Flood, the confusion of tongues, man’s personal god, suffering and submission, death and the Nether World—all have their counterparts in Sumerian religious thought. Such Biblical books as Psalms, Lamentations, Proverbs, and the Song of Songs have their forerunners among the Sumerian literary works. 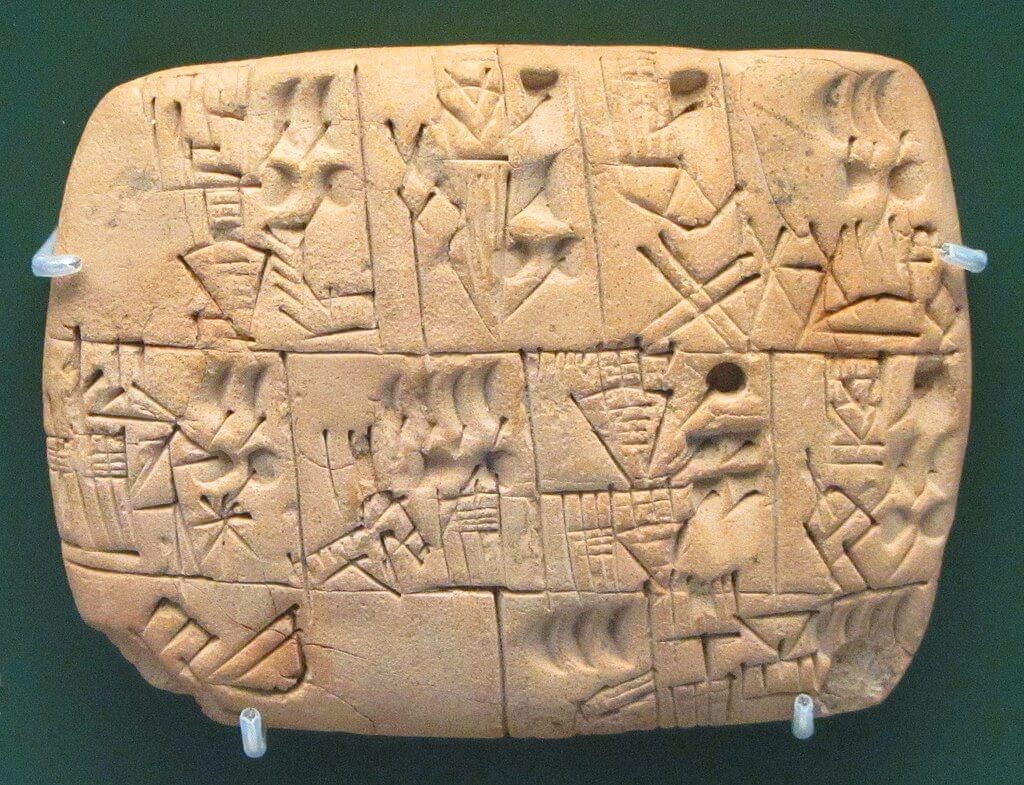 The existence of the Sumerians is entirely a discovery of modern archaeology and scholarship. The ancient Hebrews and Greeks knew the land of Siuner as Babylonia, the home of the Semitic-speaking Babylonians. This was also the belief of the explorers and archaeologists who began excavating in the area in the early 1800’s.

Most of the cuneiform documents excavated in those early days were written in the Semitic tongue now known as Akkadian, and the Semites were therefore assumed to have been the original inhabitants of the land and to have invented cuneiform. As study of the documents progressed, it became apparent that there were no signs for certain characteristic Semitic sounds, such as guttural and emphatic stops. Moreover, some of the excavated tablets were recognizably bilingual, with Semitic translations of words and phrases of a language that was not Semitic in vocabulary or structure. 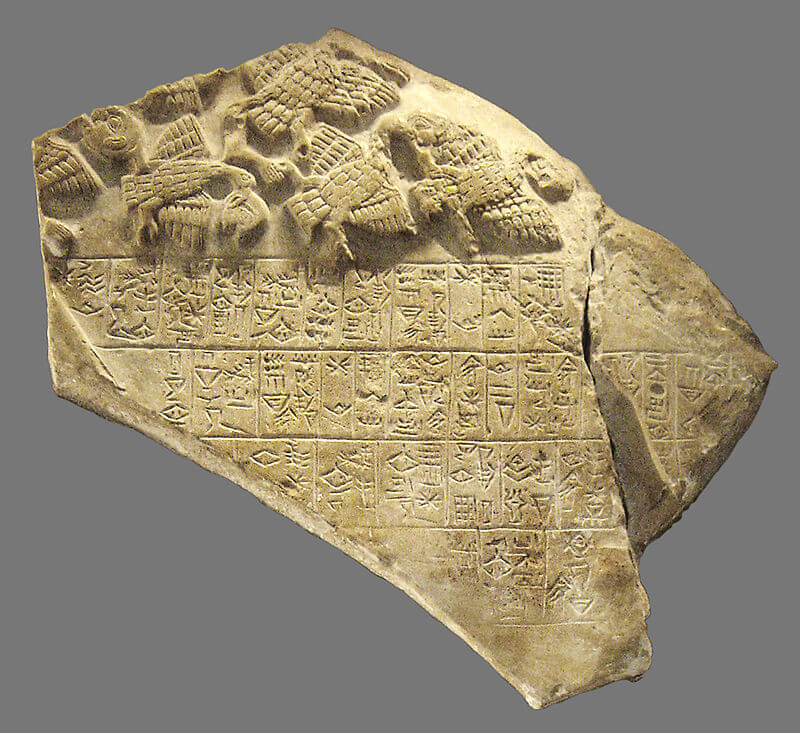 In 1869, the French scholar Jules Oppert suggested that the name of the people who spoke this strange tongue was found in the inscriptions of the early rulers, who were designated “kings of Sumer and Akkad.” Since Akkad, he argued, certainly referred to a Semitic land, Sumer must be the name of the non-Semitic land whose people, the Sumerians, originated cuneiform.

Not all scholars accepted Oppert’s identification, but soon the French excavations at Lagash, which began in 1877, started to unearth what were to be thousands of Sumerian clay tablets and many statues and plaques. Twelve years later the Americans began digging at Nippur, where some 3,000 Sumerian literary tablets and fragments were unearthed. Since then excavations in various sites have uncovered Sumerian temples, palaces, and other buildings, as well as innumerable artifacts and inscriptions. As a result, the Sumerians are becoming one of the best-known peoples of the ancient world.